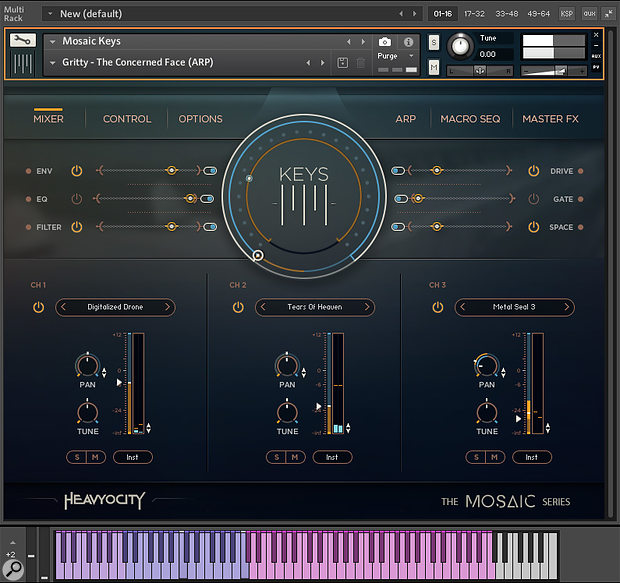 Heavyocity's latest 'for Kontakt' line is the Mosaic Series. Two titles kick it off; Mosaic Keys (the subject of this review) and Mosaic Voices, but it would seem further titles are planned. As with Heavyocity's other product lines, the common ground is in the front-end and, if Mosaic Keys is anything to go by, the Mosaic front-end is impressive. It packs plenty of features but also manages to be pretty intuitive in use. Oh, and it's also rather smart looking.

Mosaic Keys requires Kontakt 6 and is built from 5.6GB of raw data (3.8GB on disk with NI's lossless compression). A single .nki is supplied but presets abound as you get a library of 180 Snapshots to browse. These are split into Mellow and Gritty categories, and within each category there are three sub-sets of Snapshots: playable, rhythmic and arpeggiated. I have to say that it took me a while to get past the Snapshot presets. There are some beautiful, moody, haunting and utterly inspirational sounds here.

Each of the Snapshots is, itself, built by combining up to three of the 268 underlying sound sources. Given the library title, it's perhaps not surprising that electronic keyboard sounds are a big part of the underlying sound set. However, these also include synths, ambient noises, attack sounds and various drones. Depending upon how you combine these — and balance their contribution via the UI's mixing options — you can actually coax a wide range of sounds from Mosaic Keys. Yes, it can do fairly conventional electronic piano-type sounds but there is actually way more to it than that. And, while 'gritty' implies overdriven or distorted, this is always tastefully done. From mellow pop, through trip-hop and into cinematic scoring, Mosaic Keys has a distinct sonic niche but manages to cover a lot of ground.

Mosaic Keys is an impressive start to the Mosaic line and even more so given its fairly modest asking price.

While the 'playable' Snapshots make good use of the Mixer and Master Effects sections of the Mosaic engine, what's really impressive are the sound design options offered by the Control, Options, Arp and Macro Seq pages. Control provides some powerful yet easy-to-use modulation options, the Options screen allows you to adjust the mapping of the three sounds across the MIDI note range (so you can create keyboard splits if you wish), Arp provides independent arpeggiators for each of the three sounds (including chord options), while the Macro Seq provides further control over tempo-locked sound modulation. In short, the Mosaic front-end is slick, streamlined, but powerful.

Indeed, Mosaic Keys is an impressive start to the Mosaic line and even more so given its fairly modest asking price. If this is an example of what the Mosaic Series is going to offer, I'm already impatient for more.