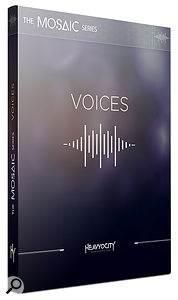 I recently reviewed Mosaic Keys, the first title in Heavyocity's new Mosaic series of instruments designed for Kontakt 6. Mosaic Keys was very impressive and, while something of a niche title, was both super-fun and very inspiring to use. The subject of this review is the second title in the Mosaic series — Mosaic Voices. Does it match its sibling? Well, let's start with the obvious; it shares the same front-end and, as that was most certainly one of the impressive elements of the Mosaic Keys library, that's certainly a good thing.

The underlying sample architecture is also similar but, of course, rather than piano/keyboard sounds, the raw material is dominated by various vocal sources. These include some obviously 'human' vocal sounds but also various types of processed or layered/hybrid sounds as well as a smattering of synth beds for further textural possibilities. The library requires Kontakt 6 and is built from 6.3GB of data once packed with NI's lossless compression. The single nki includes 130 Snapshots divided into 'hybrid' and 'organic' categories. Each category has three subsets of Snapshots; playable, rhythmic and arpeggiated.

Again, each Snapshot is built by combining up to three of the 160 underlying sound sources. Vocal-esque sounds dominate but (thankfully) this is not just another collection of 'ooh' and 'ahh' vocal pads. Yes, you can conjure that from it, and as ably demonstrated by the 'playable' Snapshots, there is a beautiful, haunting, cinematic character to many of these presets. You can add plenty of performance options to these via the Mixer and Master Effects sections of the Mosaic engine, and the large Macro control can be used to offer simplified control of some of the powerful sound modulation options offered when you dig deeper into the Control, Options, Arp and Macro Seq pages.

These playable presets are great but things get more inspiring in the rhythmic and arpeggiated presets, where the sound design features of the engine come to the fore. These preset types are configured to make fuller use of the underlying modulation options and there is some super-cool stuff here. Again, you could imagine cinematic applications spanning ethereal, mysterious, magical or tension moods (although not getting into bombastic choir territory), but these sounds would also appeal to ambient/trance inspired electronic music producers.

It's also worth noting that the sonic quality is excellent throughout despite what is a (fairly) modest price tag. Mosaic Voices is just as good as Mosaic Keys and that means it is very good indeed. Having enjoyed both these titles, I'm now more than a little impatient for whatever Heavyocity might do next in the Moasic line. Top-notch stuff.