This equaliser may be based on the Pultec EQP1A, but Edax have been very active in tweaking that classic passive design to give their version some unique features. 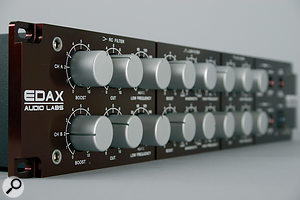 Edax Audio Labs are a Mexican company who specialise in manufacturing high-quality recording equipment. They've been in business for around 20 years, and all of the previous products have been valve‑based preamps of one sort or another, but the latest addition to the Edax fold is a two‑channel, three‑band equaliser, and one that I found interesting...

For a start, the equalisation is entirely passive, based on the famous Pultec EQP1A passive equaliser concept that dates back to the late 1940s. Secondly, the gain make‑up stage can be switched between valve and discrete solid‑state circuitry, both operating in class A, naturally. One of the advantages of passive equalisation (as opposed to the more elaborate, feedback‑based, active equalisers that are more commonly used today) is that minimal phase shifts are introduced, and an arguably more attractive sound character results.

All the signal-path switching in the EQP2E is performed with sealed relays or sealed front‑panel rotary switches, and the continuously variable controls employ high‑quality conductive plastic devices. The substantial, 2U‑high front panel is milled from 3/8‑inch aluminium, which is painted a tasteful dark red and fitted with aluminium control knobs, lending a very classy and traditional look to this equaliser. The audio connectors are Neutrik XLRs with gold‑plated terminals, and the valves are supported in nice ceramic bases. So, quite clearly, there has been no skimping or cost‑cutting involved in the design, specification or manufacture of this beast.

A guided tour of the rear panel will take no time at all! The two channels of analogue line‑level audio in and out are interfaced with (electronically‑balanced) XLRs, while mains power is connected via a standard IEC socket, incorporating an integral fuseholder. A separate, recessed switch is provided to change the mains-supply voltage setting.

The front panel is more interesting, with some obvious modifications to the original Pultec design, but it's still very straightforward and simple. Starting at the right-hand side, there are two switches, which are shared between both channels. The first is a rocker switch to handle mains power on and off, while an illuminated push‑button is used to switch globally between the solid‑state and valve gain stages. All other rotary controls and switches are entirely independent for each channel. Illuminated buttons allow switching in and out of each channel's EQ circuits, and bypass all the electronics in each channel completely, using a hard-relay bypass. The filter in/out switch allows the unit to be used as a fixed‑gain valve or solid‑state preamplifier, to add some subtle colour to a signal, if required.

A significant part of the original Pultec's sound was undoubtedly due to the fact that it had both input and output transformers, as well as a coupling transformer between the passive EQ stage and the gain make‑up section — a design feature that added some colour. Unlike that original design, the EQP2E has no audio transformers, but Edax claim that the absence of these transformers improves resolution and reduces distortion. I've no doubt that they are right, but it does also mean that comparison with the sound (as opposed to the functionality) of the Pultec is rather pointless.

The EQP2E's front panel gives you eight large control knobs for each of the two channels, while the rear of the unit is as simple as you'd expect from a passive EQ design such as this.

The equalisation for each channel is divided into three bands and controlled with eight rotary controls. Carrying on from the right‑hand side is an RC‑based (resistor/capacitor) low‑pass filter, providing up to 17dB of attenuation from a continuous rotary control (scaled 0‑10). The turnover frequency can be selected on the adjacent rotary switch from 2, 3, 4, 5, 8, 10, 16 and 20kHz. Just three high‑frequency (HF) attenuation frequencies were offered by the original Pultec, at 5, 10 and 20kHz, so Edax have expanded the versatility here considerably.

The middle EQ section is a peaking LCR filter (the 'L' referring to the use of real, high‑permeability inductors, as opposed to the electronic gyrators that are often employed in modern designs). Continuous rotary controls adjust the boost amount by up to 20dB (there being no cut option) and bandwidth (no figures given), while the centre frequency is controlled with a rotary switch selecting from 1, 1.5, 2, 3, 4, 5, 8, 10, 12, 14 and 16kHz options. Again, the original Pultec offered only seven MF/HF boost frequencies, and Edax have added musically useful additional settings at 1, 1.5, 2 and 14kHz. The range of bandwidth adjustment is enough to cater for very broad, gentle tonal shaping, or reasonably focused refinements, and because there are only boost options here, having broader bandwidths is preferable to the narrower settings that better suit cut‑filtering.

Finally, the LF section is another RC equaliser, but is configured to offer shelf curves, with separate level controls for boost (0 to 16dB) and cut (0 to ‑20dB). The turnover‑frequency selector is common to both modes, and provides options for 20, 30, 60, 100, 180 and 250Hz. Not surprisingly, Edax have expanded on the original Pultec options here too, adding the 180 and 250Hz positions.

Despite the Edax revisions, though, the concept and filter-circuit implementation is classic Pultec throughout, and it has been built with higher-quality components than Messrs. Shenk and Summerland could ever have dreamed of in 1951, when they licensed the Western Electric filter designs to manufacture as the original Pultec EQP1A. Not surprisingly, the use of modern capacitor design and construction, high-permeability inductors and metal‑film resistors has enabled Edax to obtain far better technical specifications for the EQP2E than were possible 60 years ago. The maximum output level is an impressive +29dBu, with a noise floor better than ‑76dBu, giving a dynamic range of 105dB. Distortion is better than 0.05 percent (unweighted), and the frequency response extends between 5Hz and 100kHz (the limits are not given).

The internal construction of this equaliser is very neat and tidy, with separate, shallow, horizontal circuit boards supported from each channel's front-panel controls. These are linked to the main circuit board on the base of the chassis, which carries the two valves and two encapsulated solid‑state gain modules. All the PCBs are single‑sided (with the full‑sized components on one side and the copper tracks on the other), which Edax claim also contributes to the sound quality achieved. The valve gain-stage employed in each channel is provided by a dual‑triode ECC82 (12AU7), while the solid‑state gain-stage appears to be a proprietary encapsulated module, but is said to involve discrete circuitry. However, there's also a handful of integrated circuits in the signal path: classic NE5534 op‑amps appear to be used to perform electronic balancing duties for the inputs and outputs.

The Edax manual has some entertaining 'Mexiglish' but, thankfully, hooking the EQP2E into a system is very simple, and the functionality can be figured out quite intuitively. The unit undoubtedly benefits from being driven fairly hard, which maximises the signal‑to-noise ratio and, as most analogue console insert points operate with nominal levels below 0dBu, you'll probably end up running the input gain pretty hot and pulling back on the channel fader to optimise the gain structure through the EQP2E. For that reason, I found it easier and better to connect the EQP2E after a stand‑alone mic preamp and before the A‑D converter feeding the DAW, since optimising and managing the signal level, gain structure and headroom margin became considerably easier.

With the EQ switched out and a healthy signal level running through the device, the tonal character is very clean and neutral in the solid‑state mode, and noticeably 'warmer' in the valve mode. Both were musically appealing, but I found myself tending towards the solid‑state path more often than not — although that probably says more about my personal taste and preferences than anything else.

Switching in the equaliser and using it to shape the balance of a mix was a pleasure. This is a very smooth and natural-sounding equaliser that tailors the sound in a very transparent way. My only complaint is the need to match control settings for the two channels when working on stereo material: a mastering version, with switched gain and bandwidth controls, would be a real winner! Having said that, the controls are all very easy to use, and I rarely needed much gain to achieve the desired results. The additional frequency settings are useful, especially in the LF band, as I found I often used the 180 and 250Hz cut options to help add clarity to a mix (those frequencies weren't included in the Pultec original). Adding high end 'air' is a positive delight with this equaliser, too, doing exactly as you would wish without any deleterious side effects: no edge or harshness, just smooth, spacious airiness and sparkle.

As a channel equaliser, I found the EQP2E useful, although it's obviously not as surgical as a modern parametric design. It's great when you want to shape the tonality of a source that's almost right, but less useful when trying to remove unwanted spill or annoying resonances or buzzes.

Overall, the EQP2E is a lovely-sounding equaliser, and something that particularly suits bus, mix or budget mastering equalisation. It also represents good value for money in comparison with other Pultec‑based designs, and has the nice additional benefit of providing a push‑button choice of solid‑state or valve amplification. This is a well-built, high-class piece of equipment that warrants a serious listen.

At the UK asking price, the EQP2E sits between such venerable peers as the valve‑based Drawmer 1961 and the Summit Audio EQP200B, the latter being another Pultec‑based design. The Langevin Mini Massive Passive valve equaliser is also derived from the Pultec ideas, and the single‑channel Thermionic Culture Pullet is another possible contender. Alternative solid‑state equalisers in the same financial ball-park include the impressively cost‑effective DAV BG3, the Neve 8803, the Oram Hi‑Def 35, and the Portico 5033. The only officially authorised user of the Western Electric passive EQ circuitry is Manley's Enhanced Pultec EQP1A — but that costs as much for a single channel as the Edax does for two, and doesn't have the option of a solid‑state gain make‑up stage.

Yet another Pultec‑inspired equaliser, but with additional versatility of frequency selection and both valve and solid‑state amplifier chains. Constructed to high standards, this is a classy‑sounding equaliser that's ideally suited to overall tonal shaping.