The idea of a capo that forms open chords is not a new one, but the Voice Capo is a new device that makes the job very easy. Essentially, the Voice Capo comprises a plastic box that covers the first four fret positions of the guitar, and incorporates 24 latching buttons that can push down any of the strings below — so it's capable of forming any chord that can be fingered on those four frets. It's straightforward to use, but there's a little minor DIY to do first, as the capo comes with sticky pressure pads: one set for electric, and another for acoustic. You stick these pads to the bottoms of the device's 'fingers' so that they apply the correct pressure to the string. You also get two sticky rubber strips to fix to the inside edges of the device, so that they rest against the edge of your guitar's neck, protecting the guitar from direct contact with the hard plastic casing. A velcro strap secures the Voice Capo to the neck, and you're then ready to start creating a chord. The buttons are pressed down in the same pattern as if you were fingering a chord, bringing the finger pads into contact with the strings. Pads are released by selecting any other pad on the same string, or by pressing any other pad on that string halfway down, an action which will 'clear' the whole string. 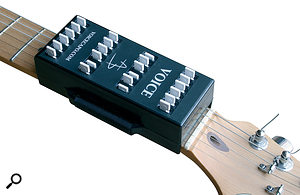 The Voice Capo may look a little clunky, and using it takes a little getting used to — because although the open strings are now in an open tuning, any fretted notes you play are still in normal tuning — but it's really very easy to set up and use, and with experimentation you'll soon find things that work and, more importantly, that can sound very impressive! If you're the type of player who likes to experiment with the textures of different tunings, the Voice Capo will probably appeal to you: the results that can be achieved combine elements of what you'd expect from regular open tunings and from standard tuning. You can buy the Voice Capo direct from the company's web site at a cost of $99, and you'll also find an informative demonstration video there. Paul White

The Voice Capo brings you some of the benefits of open‑chord tunings, while still allowing you to play with standard tuning further up the neck. It's easy to set up and use, and the results are good.