Edirol have enhanced their popular stereo recorder in the face of growing competition. How does it measure up? 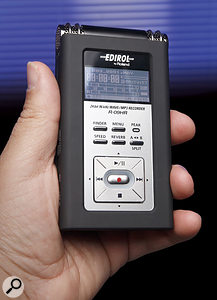 Photo: Mike CameronIn light of so much competition, there are some essential features that a modern stereo recorder must have. The product needs to be so small that it slips effortlessly into a pocket. Mains power is fine, but it must also run on batteries for long enough to capture the most meandering conference speech or gig performance. Likewise, the memory has to be large enough to store any of the above at the device's maximum bit-depth and sample rate. Having inputs for connecting external mics is pretty important for remote recording, but the on-board ones still have to be of high quality. In this day and age USB connectivity almost goes without saying, as does the final prerequisite: that the device has to be fast and easy to use.

The R09, which records to non-volatile SD media and was reviewed by SOS in October 2006 (www.soundonsound.com/sos/oct06/articles/edirolr09.htm), already fulfilled the criteria I've described above, but the newer R09HR that is reviewed here introduces a number of improvements, to keep pace with the competition.

The R09HR is equipped with an 'Isolated Adaptive Recording Circuit', which provides stable, separate power supplies to the analogue limiter and the A-D converter, to tackle the problem of DC interference. The perennial problem of handling noise has also been tackled by coating the plastic body with a rubberised skin, which also serves to provide a better grip.

The HR's microphones are of higher quality than those on the original R09, the maximum sample rate has been upped from 48 to 96kHz, and the OLED screen (the 'O' stands for organic, so maybe it was grown without artificial fertiliser!), is somewhat larger. Most welcome is the addition of a small monitoring speaker, located on the rear (it's not there for critical analysis of recordings, just as a means of quickly auditioning files when held close to the ear).

Our review of the R09 described it as sleek and stylish, but, for ergonomic reasons, the design has had to change. Together with the screen resizing, the battery compartment (which takes two standard AA batteries) has been moved from one end to the underside to improve access, and a few extra hardware buttons and switches have been added to improve usability.

Small though it is, the R09HR ships in a relatively large box packed with extra bits and pieces. These include a 124-page A5 manual, a full-colour booklet entitled Practical Guide To The R09HR, a tiny battery-powered remote control that is designed to hook on a key ring, a mains adaptor, Cakewalk's Pyro Audio Creator LE software on a CD-ROM, a simple plastic stand for seating the device on a desk, and a one-metre USB cable.

In addition to the above, Edirol also make numerous optional accessories, including a protective cover that doubles as a tripod adaptor, a mic-stand adaptor, mini tripod, and padded carry pouch.

Every edge and plane of the R09HR is home to some sort of socket, switch or button. The underside, for example, is the place for switches, all the I/O is found around the edges, and the navigation buttons are situated on top alongside the screen. The two non-movable microphones are fixed on the front corners, either side of the headphone mini-jack socket and the remote control's sensor. On the end furthest from the mics, Edirol have positioned the SD card slot and USB socket, protecting them with a hinged, rubbery flap. On the right hand edge are the power adaptor input and On button, together with speaker and headphone volume controls. Opposite are the only two inputs, both accepting mini rather than quarter-inch jacks. The first is for line-level signals, whereas the second allows plug-in powered stereo mics to substitute for the on-board pair. Quite logically, the input-level buttons sit alongside these sockets. 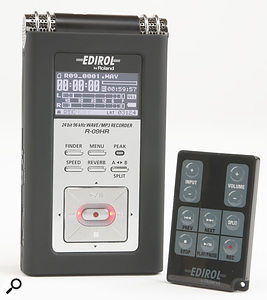 The included remote control provdes a convenient means of recording yourself, cutting down on handling noise, footsteps and so on that you'd otherwise need to edit out later.Photo: Mike CameronAt home on the upper surface are the Menu button and cursor keys required for menu navigation and parameter adjustment. I say cursor keys, but actually there's just the one button, which rocks like a joystick and has a separate record-arming button in its centre. During song playback and recording, the rocker switch becomes a transport key assigned to forward, back, stop and play/pause functions.

The remaining buttons include one for auditioning and organising song files (Finder), a song playback speed adjustment (Speed), the on-board effects processor selector (Reverb) and an A/B marker button. A short press of the Reverb or Speed button turns the relevant facility either on or off, and holding it down for longer calls up the setting's parameters so that they can be altered.

It's from within the menu system that many of the settings, as activated by the underside switches, are determined. Here, for example, the low-cut filter can be set to 100, 200 or 400Hz, and the auto gain control selected in favour of the limiter. Of course, things like the sample-rate and bit-depth settings are also menu options, as are the general song-file and device-management settings. On the base, the switches activate plug-in power, the input limiter/automatic gain control and the low-cut filter. Alongside these is also a level attenuator with a high position suitable for capturing speech, and a low one that's more appropriate for recording loud gigs.

By playing around and exploring the various buttons and menus, most people could probably learn to use the R09HR in less time than it takes to read the sizeable manual! This is a good thing in my book, because it means that the device is both well designed and thoroughly documented.

Having hard on/off switches for certain settings is rather useful. As explained above, their value is set from within a menu, but from there on the switches make it fast and easy to adapt the setup to the recording environment. At first I worried about the underside buttons getting knocked on the desktop, but four tiny rubber feet keep them clear. Also on the underside is the mini speaker, which is great for discreetly auditioning a recording without using headphones (and is a feature missing from, for example, Tascam's DR1 that I reviewed in last month's SOS).

The tiny key-ring remote control works just like a TV remote, using an infrared beam to communicate with the recorder. Whoever has the remote is able to operate all the transport, volume and level controls as well as arm and activate recording. However, it's worth noting that extreme lighting can interfere with the control's operation — so it might not always work in lightshow situations. What's more, its range is no more than four metres, which means that the recording position has to be so nearby that you couldn't, for example, sit the recorder facing a stage and then operate it from the FOH position, especially if that happens to be behind the device. It is possible to bounce the beam off a ceiling, but it has to be a low one. To make it easier to set levels from afar, the recorder possesses a red status LED on its 'nose' that flashes slowly when record is activated and fast if the input level is set too high, and stays red when recording is taking place.

The remote's features are slick, but there are areas in which I feel the R09HR is marginally underpowered from a recording musician's point of view. For example, although the speed control operates over a 50 to 150 percent range without changing a song's pitch, it doesn't sound great even at 90 percent, and there's no pitch-change option, should you want it. It is also not possible to enter the menus and change parameters while a song is playing.

Edirol's efforts to reduce handling noise by adding a rubberised coating are commendable, but not entirely successful. The sound of moving digits on the rubber is more pleasant than on bare plastic, but it's still going to ruin a recording. Really, the only way of getting unblemished recordings is to mount the device on a stand or tripod and trigger it remotely. The little plastic stand that comes free is fine if there is a surface of suitable height on which to rest it; if not, you'll need to purchase the mounting kit separately. 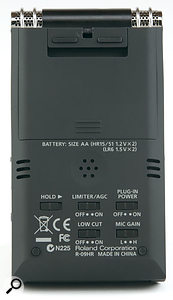 Mic and line inputs are located on the left-hand side of the unit, along with input level controls, while playback volume and power controls are on the right, and various other controls, such as those for setting mic sensitivity and filters, are found on the rear panel.Photo: Mike CameronThe on-board mics are clear and free from excessive noise. They don't appear particularly overbearing in any particular frequency, so their recordings are balanced and solid. I had the Tascam DR1 to hand, which I'd already tested against a Zoom H4 and found to be relatively bright sounding, so I conducted side-by-side tests, configuring the R09HR to have matching settings. Tonally, the results sounded remarkably different — but which of the two is better is actually difficult to say, particularly as their relative strengths become more apparent on certain material and at different distances. Perhaps, though, the evenness of the Edirol's sound might give it the edge. In terms of things like noise and clarity, there was very little to choose.

Relative to the aforementioned Tascam DR1, the screen is small — although it's still pretty big for this type of product. Dimensions aside, the display is extremely bright and sharp, so it's not at all hard to see what's going on in any lighting conditions. I particularly like the metering, which is refreshingly detailed, providing a sensible dB scale so that level adjustments can be made with confidence. Once a track has been recorded, navigating through it is easy enough, but I do feel it would be better if there was a way to directly access the time display and move it to a precise position.

Over USB, the recorder interacts with a computer just as if it were any other storage device, allowing fast access to its files and folders for the purpose of exchanging material. Unfortunately, it isn't possible to top up rechargeable batteries via USB — or, indeed, the power supply — so a separate charger is essential.

Edirol could improve the R09HR still further with just a few extra tweaks, such as adding a screw hole for direct tripod mounting, refining the speed control and its options, making it possible to cruise menus while a track plays back, and perhaps enhancing the song-navigation tools. For something of this size, it would be unreasonable to expect phantom-powered XLR inputs, but the R09HR doesn't even have a quarter-inch jack socket, and this lets it down a tad.

On the whole, though, I think Edirol should be congratulated for making some really worthwhile improvements to what was already a very respectable little recorder. The size is just about right: small enough to hold comfortably in the hand, but barely wider than the AA batteries it requires for power. This is a good recorder, and although it probably faces stiffer competition than its predecessor did a couple of years ago, the HR is very much a contender, and well worth a look if you're considering purchasing a device of this kind.

The R09HR currently faces stiff competition from (among others) the Zoom H4 and H2, M-Audio's Microtrack II, the Olympus LS10, Yamaha's Pocketrak 2G and the Tascam DR1.

The R09HR is a great little recorder, with some novel features, that comes with plenty of accessories and good documentation. It's certainly more than enough for corporate jobs, but is also capable of making perfectly respectable field recordings for musical applications.