The Edirol R09 is one of the most stylish and compact digital recorders on the market — but is it as accomplished as it is good looking?

Hand-held digital recorders seem to be all the rage at the moment. With Edirol's popular R01 now discontinued, the company are launching their new compact digital recorder, the R09. As one would expect, the R09 builds on the success of its predecessor, incorporating most of its key features. The new device records and plays back with 24-bit audio resolution, just like the R01, and it features electrolytic capacitors, which provide a degree of stability to its analogue circuits that effectively eliminates DC interference. As did the R01, it also has a built-in stereo microphone. So what new selling points is the R09 bringing to the party? Well, inevitably with this kind of technology, it's a lot smaller (half the size of the R01, in fact), it's more stylish and — the bottom line — it's cheaper to buy. Measuring just over 10 centimetres in length and weighing in at an almost feather-light 145g, at first glance one could be deceived into thinking that the R09 was nothing more than a rather smart-looking Dictaphone. Don't be fooled by the device's diminutive stature, however. Size, in this case, is far from everything.

Audio connections comprise a stereo mini-jack mic socket and a mini-jack line input. Phantom power is available via the mic socket, activated through the main scroll-down menu on the tiny 124 x 68-dot LCD on the front of the unit. Flexibility is the name of the game when it comes to recording quality, as the R09 offers the option to record audio as either WAV or MP3 files. WAV files are recorded at 16-bit or 24-bit resolution, using a 44.1kHz or 48kHz sample rate, while with MP3 files the options are 128, 224 or 320 kbps. Obviously, along with the difference in quality, there is a fairly gigantic difference in the recording times that can be achieved with these different formats. For example, recording at the highest possible quality (a 24-bit WAV at 48kHz) gives you just three minutes of recording time using the supplied 64MB memory card. At the other end of the scale, recording using the MP3 format at 128kbps gives you a whopping 62 minutes on the same card. The trade-off between quality and recording time, fairly obviously, will depend on the purpose you have for the recorder. Incidentally, the SD (Secure Digital) cards the R09 uses are a little smaller than the flash cards used by other portable digital recorders, such as the M-Audio Microtrack. You can buy higher-capacity cards, at 512MB, 1GB and 2GB, the 2GB card yielding a more practical 110 minutes at the highest possible recording quality. Edirol recommended Sandisk, Lexar and Kingston memory cards, when I spoke to them.

As for those mics, positioned either side of the top of the unit, they're good quality, omnidirectional, back-electrect microphones, offering an extremely flat frequency response and a left- and right-biased polar pattern respectively. They're also shockmounted and intended to be durable against external vibration.

Despite its size, the R09's LCD menu is extremely intuitive. There are basically three menu screens, one showing live track data, one which acts as a kind of file manager and one offering the main menu options. Everything other than input level and output volume is controlled via the fast forward, rewind, record and play buttons, in concert with the display screen. Monitoring is via a stereo mini-jack headphone output, which will also connect to powered analogue speakers or digital speakers, with an optical cable.

A unit like this is designed to record on the fly, so going from plugging in to recording a track is a smooth and easy process. It's simply a case of arming the unit (pressing the record button to start it flashing) and then adjusting input level, via small buttons on the side. Once you're happy with the input level, a second tap of the record button gets everything rolling. The track is saved automatically with a default name —for example, R09_0001.WAV/MP3. Obviously, you'll want to name tracks properly, something that can be done via the main menu, although I found it much easier to download the track to my computer and then name it from there. The name appears on the R09's screen as typed, so if you're calling the track 'Mowing the Lawn in the Gardens of Avalon' or something, it's a hell of a lot easier to type that on a computer keyboard than it is to use the scroll buttons to pick out one letter at a time on the R09. You can also create folders using the menu keys, if you're going to be storing a lot of different audio files. The other nice touch is that you can add a little digital reverb to the recording. The recorder offers four basic preset variations: Hall 1, Hall 2, Room and Plate, all of which seem decent enough for a product of this type and help to add a little shine to things. 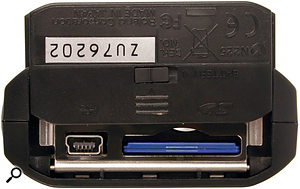 The bottom panel of the R09 flips open to reveal the Secure Digital card slot (shown here with the supplied 64MB card in place) and the USB connection that's used to transfer files to a computer.If you're using the device with an external mic, you'll want to make use of the four slider switches on its back panel. These include a switch marked AGC (auto gain control), which replaces the manual-input level buttons with automatic attenuation of loud sound sources. I found this a handy little feature when recording a full-on band in a rehearsal situation, where drums and low frequencies needed to be seriously attenuated without losing the vocals and quieter instruments. Next to this is the mono/stereo microphone switch, and below this is a low-cut switch, which proved surprisingly effective at reducing breath noise when recording vocals. I also used it to cut down wind noise on the mics when recording outside. The fourth switch is a high/low mic gain, which I found invaluable when recording the band playing at full volume. Incidentally, a word of warning with regards to input levels: the LCD meters could have been calibrated a little more sensitively, and if the input signal is peaking at all, on playback you may notice that a little distortion has crept in.

At the quieter end of the audio spectrum, I also used the R09 to record some ambient sounds for a friend who was making a radio documentary. If, like me, you feel a little self-conscious collecting sounds in public, this device is for you. As it's so dinky and has a mini-jack headphone input, most people will think you're just listening to your MP3 player — which incidentally, the R09 can also be. One thing worth bearing in mind is that record times can seem very short with the provided 64MB flash card: it gets full very quickly, especially if you're recording using high sample-rate WAVs, and it's a little frustrating when the recorder suddenly stops working in the middle of a take because the memory card is at its limit.

The M-Audio Microtrack 24/96 (reviewed SOS March 2006) offers a similar experience to the R09. It doesn't have quite the same smooth lines as the R09 and it comes in at £50 more, but it does allow WAV recordings at higher sample rates — 88.2kHz and 96kHz. It also features twin balanced mic/line inputs. It doesn't, however, allow you to name saved audio files. For a little more money than both, the Marantz PMD660 does a similar job, recording uncompressed linear PCM audio at 16-bit resolution in either WAV or MP3 format. The unit boasts dual XLR inputs with full 48V phantom power on both. It also features cut-and-paste editing functions and a built-in speaker. It doesn't, however, offer 24-bit resolution and also feels huge compared to the R09, coming in at over twice the size.

Perhaps one of the most impressive features of the R09 is the ease with which files can be exported straight to a computer. It connects to a computer, and subsequently the on-line global community, via an ultra-speedy USB 2.0 interface. Transferring files is a breeze. It's just a case of connecting the provided USB cable between the recorder and the computer, waiting briefly for the two to recognise each other, then opening the audio files with whatever program you usually use. I recorded a song idea I wanted to show a friend in Brazil. From picking up the acoustic guitar to emailing my finished demo to a studio on the other side of the planet took about the same length of time as it did to make a cup of tea while I waited for his feedback. To give you some idea of how fast this device is at importing and exporting audio files to and from a PC, a 600MB recording at 16-bit/44.1kHz takes five minutes to transfer from the recorder to the computer. It would take an hour to transfer the same recording from a Minidisc. 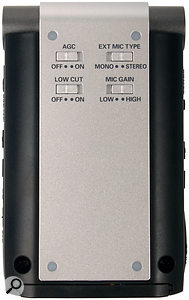 Not only is the R09 versatile, it also displays a lot of information. All recordings are time- and date-stamped. The size and type of each file is also displayed on the File Information screen. Other menu options let you monitor the input sound via the headphone output during recording, set the order in which tracks are played back, either sequentially, in shuffle mode or separately, and even adjust the screen brightness and set a display timer. One useful feature is the ability to set markers on a track to repeatedly play back a specific section. Not only is this handy for checking parts of a recording, it also makes things simpler if you're lifting a specific part of a track to sample.

There's not really a lot I can fault about the R09. Its predecessor was already an impressive little device, and to take the philosophy and aesthetic behind it and improve upon it, in terms of looks, ease of use and price, is quite a feat. Granted, the R09 doesn't have the same effects processing as the R01 (four types of reverb compared to 13 different digital effects with the latter), nor a tuner or metronome, but then it is a lot smaller and cheaper too. You'll probably want to invest in a larger memory card than the one provided, and you'll also need Windows XP or Mac OS 9.2 or above to play 24-bit WAV files (which, incidentally, won't run with Windows Media Player).

With a cautious eye on input levels and record times, the level of quality that can be achieved is impressive, especially with simpler setups, such as acoustic guitar or piano. That said, when I used it to record a rock band going at full tilt in a rehearsal situation, the results were certainly good enough for the band to listen back to and use.

The R09 is undoubtedly one of the sleekest hand-held digital recorders on the market, but rest assured that with this level of versatility and performance it's certainly not a case of style over substance.

Good looks, intuitive functionality and an impressive technical specification make this the perfect device for a whole range of portable recording applications.