Edirol's updated PCR keyboard range offers more controls than ever, and a software editor to make the most of them. Let's check it out... 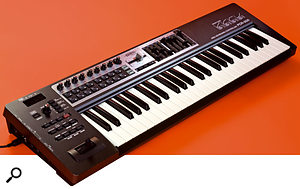 The Edirol PCR500 is a 49-note USB MIDI controller keyboard with a variety of assignable MIDI controllers, including 18 velocity-sensitive pads and what looks like a crossfader from a DJ mixer. (Versions with 32 and 61 notes — the PCR300 and PCR800 respectively — are also available.)

The PCR500 is supplied with a printed reference manual, which covers the main features in a fair amount of detail, and a glossy, poster-sized setup guide walks you through the basic installation steps. An included CD-ROM includes drivers, a PCR Editor application and a software bundle (for Windows only — see the 'Bundled Software' box).

A device driver must be installed for the unit to work properly. Windows and Mac OS drivers are supplied, while drivers for Windows Vista (32-bit and 64-bit) are available from the Edirol web site. A USB cable is supplied, although it's slightly on the short side and you may need to equip yourself with an extension.

Look At The Knobs On That!

The PCR500 is loaded down with knobs, buttons and sliders, almost all of which are freely assignable. There are nine knobs in all, plus 18 'pad' buttons that are pressure sensitive and can be configured to send velocity or aftertouch data. There's also the aforementioned horizontal crossfader, and nine vertical sliders.

To the left of the keyboard is the familiar Roland-style combined pitch-bend and modulation control. Pitch-bend data is sent by moving the lever from side to side, while modulation messages are sent by pushing the lever forward. The lever is spring-loaded in both directions.

There's also a bank of 12 multi-function buttons which, among various other things, allow you to switch the pitch range of the keyboard up or down in octaves, and use a 'Panic' button to send 'All Sound Off', 'All Notes Off' and 'Reset All Controllers' messages on all channels.

A multi-purpose rotary encoder labelled 'Value' sits beneath a seven-segment, four-character LED display, which shows various information, depending on what you're doing at the time. Being a small display, a lot of what it shows is abbreviated, sometimes to the point where it can be a bit difficult to understand. Presumably it's assumed that any really in-depth editing will be done using the supplied PCR Editor software (more on this later).

A button on the PCR500's panel labelled 'Dynamic Mapping' proved to be slightly mysterious during the review. The manual's a bit cagey about what it actually does, saying only that it '...is an extended function for future use. For further details, refer to the Roland web site.'

This I did, and found a note explaining that 'Dynamic Mapping allows the PCR to automatically assign its physical controls to the most important parameters (for example, in the current window of the software being used)'. It added that 'When using software that's not compatible with Dynamic Mapping, you can manually configure the Control Map settings from the PCR itself or the included PCR Editor Software. '

This sounds vaguely reminiscent of Novation's 'Automap' system (featured on some of their Remote MIDI controllers), and could potentially be a very useful feature. Apparently, version 6.2 of Cakewalk's Sonar supports Edirol's Dynamic Mapping, via Cakewalk's ACT (Active Controller Technology) control panel, although the bundled version of Sonar LE (v4.0.1) appeared not to (if it did, I couldn't see how). At the time of writing I wasn't able to find any other host software that listed Dynamic Mapping support as a feature — although this may change in the future.

The sockets through which the PCR500 connects to the rest of the world are gathered together at the left-hand end of the unit. First up, there's a standard USB socket for connecting to the host computer, which also provides the PCR500's power supply, provided sufficient current is available. However, if there isn't enough current available from a USB port, or if you want to use the PCR500 without a computer, there's a socket for attaching a 9V mains adaptor. Note that this is optional: the adaptor is not supplied. 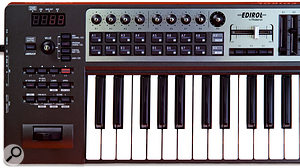 There are two standard MIDI sockets (one In, one Out), along with a switch marked 'Merge'. The PCR500's MIDI merge function allows MIDI data received at its input port to be merged with the controller's own messages and directed to one of its outputs. An external hardware MIDI controller (even another PCR500) can be connected to the PCR500's MIDI In and its data directed to one of the PCR's two 'virtual' (software) MIDI outputs, or to its physical MIDI Out.

The PCR500 can also function as a basic USB MIDI interface (one In, one Out) for the host computer, passing data to and from external controllers or sound sources.

The keyboard has 49 full-sized keys, which feel as though they're spring-loaded rather than weighted, but are nevertheless very comfortable to play. The keys are velocity-sensitive, as you'd expect, and also offer aftertouch sensitivity, which you wouldn't necessarily expect from a keyboard in this price bracket.

When the PCR500 is not in 'Play' mode, the pad buttons are used for data entry. In Play mode, they can be used as MIDI triggers. The buttons are quite small — really only big enough to accommodate a single fingertip. They work well enough, but I personally found them a bit too small to be really comfortable for rhythm programming.

The included PCR Editor software provides a helpful way to organise and keep track of the PCR500's 50 assignable controllers.

The nine knobs along the top of the PCR500's panel are also quite small, but much more comfortable. The knobs are made from a soft, rubber-like material which offers plenty of grip. The caps of the nine vertical faders are made from a similar material.

The faders feel very smooth, and although their travel is only around two inches, it's enough to allow for quite subtle and precise fades. They're well suited to controlling the faders in a DAW application's mixer window — although they can be assigned to just about any parameter.

The DJ-style crossfader allows two different parameters to be assigned, and controlled simultaneously. A variety of interesting effects can be produced in this way. Although it doesn't offer quite the same versatility as the 'X/Y' pads found on some MIDI controllers, it's still a useful feature with plenty of creative potential.

The PCR500's keyboard is effectively divided into two parts or layers, called 'Upper' and 'Lower'. These can have a variety of settings made independently, including MIDI channel. Upper and Lower can be used in several different ways: to switch between two sounds, to layer them on top of one another, or to split the keyboard into two regions, side by side.

Although the build quality is perfectly good, I'd tend to think of the PCR500 as more of a stay-at-home keyboard than a sturdy, road-proof tank (and to be fair, it's not priced as the latter either). Some of the knobs and sliders — the cross-fader in particular — feel slightly on the fragile side. They'll be fine for normal studio use, but they might not take too kindly to a knock from a careless roadie.

Control Maps ('Memory Sets' on earlier Edirol PCR models) are simply records of controller assignments (ie. which knob or fader is currently assigned to which MIDI-controllable parameter on a device or plug-in). Control Maps can be created for each of your preferred instruments and switching between them instantly reconfigures the PCR500 as required.

There are 16 on-board memory slots in which Control Maps can be stored. Bulk dumps can also be used to save Control Map data to your computer, and restore it as necessary.

Although Control Maps can be created and edited from the PCR500's panel, the supplied PCR Editor software (for Windows and Mac OS) is designed to make the process easier. A graphical representation of the panel is displayed and clicking on a knob, button or fader brings up a dialogue box in which an assignment can be specified. You can choose what type of controller message you want to assign from options comprising 'No Assign' (which cancels any current assignment), 'Channel Message' (Note-on, Control Change, Program Change, and so on), 'System Realtime' (Tune Request, Timing Clock, Start, Stop, Continue, and so on), System Exclusive, Free Message (any MIDI message up to 24 bytes long), and Tempo.

All of the PCR500's connection sockets are found on the right-hand side of the unit.You can also, individually for each controller, specify which of the PCR's virtual MIDI output ports you want the controller to send its data to (the options being Port 1, Port 2, or both). Other options are specific to different kinds of controller. For example, buttons can be set to operate in one of three modes: Unlatch ('on' when the button is pressed, 'off' when released), 'Latch' (toggles between 'on' and 'off' with successive presses) and 'Increase' (increases the value by one with each press).

With 50 freely-assignable controllers, it's easy to lose track of what's going on. PCR Editor has a couple of useful features that can help, however. For example, choosing 'Show Messages' from the 'Options' menu automatically superimposes small text 'hints' over the controls, so you can see what's where. This is a good idea — although the hints are sometimes as abbreviated as they are on the LCD display, which detracts from their usefulness a little.

Edits made in PCR Editor don't immediately affect the PCR500; you need to manually set the device to 'bulk receive mode' first, then transmit the edited data across. A similar process applies for receiving data. It's not quite a 'point-and-click' procedure: two or three button-pushes are required to switch the PCR500 to the required mode, and a couple of dialogue boxes must be clicked through. Even so, it all works well enough, and once you get used to the PCR500's layout it's not difficult.

Overall, PCR Editor is quite easy to use and does a useful job. With a little patience it ought to be possible to devise useful Control Maps for any MIDI device or application you happen to come across.

While the PCR500 can be used as a stand-alone device, it's probably at its best when used in conjunction with the bundled editor software, and it seems to have been designed first and foremost as a peripheral for use in computer-based studios. As such, it works very well, offering a wealth of assignable controllers and the benefit of aftertouch, which is unusual on a controller at this reasonable price.

The PCR500 ships with a device driver and a version of the PCR Editor software for both Windows and Mac OS. Additionally, for Windows only, a copy of Cakewalk's Production Plus Pack bundle is provided. This includes Sonar LE, Project 5 LE and Dimension LE.

* Sonar LE is a stripped-down but still-functional version of the Sonar MIDI + Audio sequencing package, offering multitrack audio recording up to 24-bit/192kHz, and VSTi/DXi virtual instrument support, among other features.

* Dimension LE is a sample-based software synthesizer, including a 100MB sample library, a 'four-element synthesis engine' and support for sfz, WAV and AIFF files.

The PCR500 is a powerful and reasonably priced MIDI controller, ideally suited to computer-based home studios. There's a bit of a learning curve, but the keyboard's flexibility justifies time spent finding your way around.