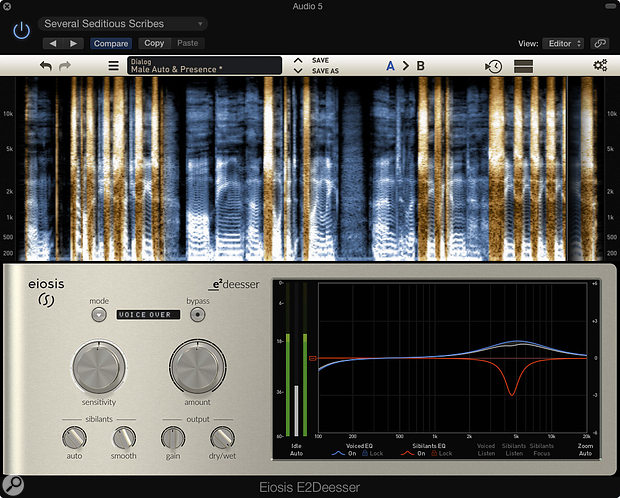 Eiosis’ revolutionary de-esser is reborn, with extra features and a snazzy new interface.

The obvious application for a de-esser is to tame problematic vocal sibilance, but it can also be a welcome ally when you are faced with splashy drum overheads or squeaky guitars. The classic de-esser design is, at heart, a compressor with a heavily equalised side-chain signal that makes it respond to bursts of high-frequency noise. When this happens, typical de-essers either duck the whole signal or, if split-band, the upper half of the audio spectrum. More sophisticated designs apply a dynamic notch filter around the problem frequency area, which helps reduce unnatural artifacts, as only the problem part of the spectrum is ducked in level.

When it appeared in 2008 (www.soundonsound.com/reviews/eiosis-e2-de-esser), Eiosis’ E2 De-esser introduced a very different approach to dealing with sibilance. In effect, its detector split sibilants and ‘voiced’ sounds into two entirely separate signal paths, allowing either to be equalised and otherwise processed at will.

E2 De-esser has been unavailable for a while, but Eiosis have recently revisited the concept to launch a radically revised and improved version. The new de-esser is compatible with all the common plug-in formats (including AAX) in both 32- and 64-bit versions for both Mac OS 10.7 onwards and Windows 7 or later. It requires a second-generation iLok key for authorisation.

When E2 De-esser is inserted into a signal path, the signal is split two ways. One feed is sent to a sibilance-detection algorithm, which can operate in various modes tailored for different applications. This has a Sensitivity control, the ring of which illuminates when sibilants are detected. The reduction in the level of sibilant sounds is then adjusted using the Amount control. A second path is for the Voiced processing, which applies EQ to the main signal path when the detection algorithm doesn’t detect sibilants. The output switches between these two paths automatically with crossfades so that transitions do not glitch.

So, for the most basic operation, you select the appropriate mode, adjust the Sensitivity so that it catches only the sibilants, then adjust the Amount control. There are modes for Solo Vocal, Background Vocals, Voice Over, Guitar Squeaks, Overheads, Stereo Mastering and M-S Mastering, where the parameters associated with the various controls are automatically adjusted behind the scenes. These include the timing and behaviour of the sibilance detection, the Auto and Smooth behaviour, frequency range and dynamics parameters. According to the designers: “Having the Mode selector allowed us to adjust dozens of hidden parameters for each mode differently, which would have been overwhelming for users to deal with.”

In fact, even the Amount control does more than you think, as it affects simultaneously the wide-band gain, Sibilants EQ and the Auto and Smooth parameters. In addition to this and the Modes menu, there’s a drop-down menu of presets arranged in sub-menus by application. The presets set up everything including the Mode, though you still have to adjust Sensitivity and decide by how much to attenuate the sibilants. User settings can be saved as presets, and there are also A and B snapshot memories to allow two settings to quickly be compared.

Other controls include Sibilant Wide Band Gain, which alters the level of the Sibilant path (across all frequencies) and can be adjusted by dragging vertically the red fader on the left of the curve display: a white curve between the blue Voiced curve line and the red Sibilant curve shows the difference between them. Auto is intended to attenuate resonant frequency peaks, while Smooth adds soft saturation to sibilants to help make them sound less harsh, and there are also overall gain and wet/dry mix controls. There is also user control over the amount of look-ahead used, to ensure that the starts of sibilants are not missed.

Finally, there’s Idle Threshold. The idea here is that processing is disabled when the input signal falls below the Idle Threshold level, which conserves CPU cycles and also prevents low-level sounds, such as breathing or background ‘room tone’, from being processed. In Idle Auto mode, which is the default, the Idle Threshold level is automatically derived from the input source signal; alternatively, Idle can be turned off or set to manual Idle Threshold adjustment. This feature is particularly useful when working with dialogue when there is some background noise, as it avoids noise chopping during pauses in the dialogue; it can also be useful to avoid triggering on breaths when mixing vocals.

A large part of what E2 De-esser does revolves around its dual EQ section. The Voiced and Sibilant signal paths have independent equalisers with up to four bands: those in the Voiced path can be set to bell, high shelf or ‘air’, while the Sibilant path’s EQ options are bell, high shelf or low-pass filter. Bands can be adjusted by clicking and dragging in conjunction with modifier keys to change the frequency, gain or Q. Settings may also be locked to prevent accidental adjustment. A Zoom control changes the vertical resolution of the curves display to facilitate more accurate adjustment, and can be set to operate automatically.

The Voiced and Sibiliants EQs can be turned on and off independently and, as in the original version of E2 De-esser, there are Listen modes which allow you to audition only the Voiced or Sibilant signal paths, plus a new Sibilants Focus mode which lets you hear both an attenuated version of the Voiced path at the same time as the Sibilant. New, too, is the detailed spectrogram in the plug-in window, which shows the centre frequency of the Sibilants EQ (or corner frequencies of any shelving bands) as red lines when the mouse is in the EQ area. By default, the spectrogram is sync’ed to the host DAW’s transport, but this can be disabled.

You don’t need to play with E2 De-esser for long to realise that it is a very powerful beast. The presets will point you in the right direction, but to get the very best results, a quick read through the manual is essential. In difficult cases, you’ll need to apply two or three processes in a subtle way, rather than relying on just one used in a heavy-handed way — as in the case of my own voice, where the spectrogram showed sibilance in two very different frequency bands, and being able to set up a pair of notch filters to deal with both was very useful.

However, notch or split-band filtering is not the only weapon; you can even leave the EQ set flat and still achieve a lot by adjusting the Auto (which addresses resonances) and Smooth controls. It is often best to use a combination of remedies, such as a lower Auto setting combined with a less deep notch filter, and doing so can yield surprisingly transparent de-essing, even with the most severe vocal sibilance. However, dialling in an excess of Auto combined with deep dynamic notching can result in an extremely lispy sound — think ‘Several seditious Sadducees’ from Life Of Brian. Don’t let this put you off experimenting, though: excellent and wide-ranging as the presets are, being able to adjust the filter tuning to suit specific voices, even those with multiple sibilance peaks, is hugely powerful, and the ability to listen to the Sibilant and Voiced paths separately is a big help when it comes to setting the controls. As usual, Eiosis have tackled a common problem in an uncommon way and ended up with something rather special.

Other ‘hi-tech’ de-essing options, albeit operating on rather different principles, include Sonnox’s Suppresser and FabFilter’s Pro-DS.

This is an extremely comprehensive de-esser and is able to deal with problems that other de-essers simply give up on.