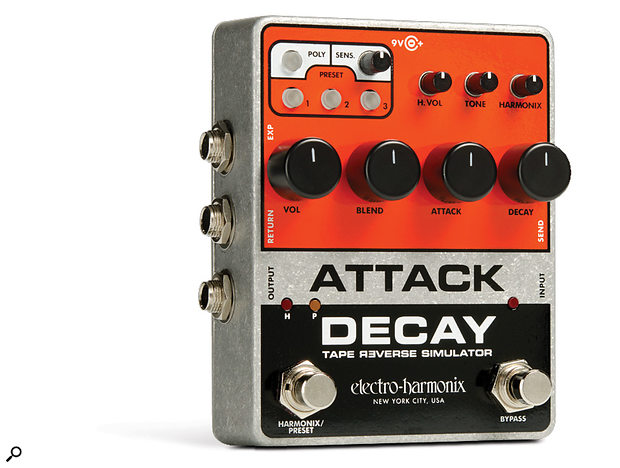 Back in the dark ages of the 1980s, Electro-Harmonix (EHX) described their Attack Decay pedal as a 'Tape Reverse Simulator', due to its ability to give guitar sounds a slow attack and/or fast decay. This discontinued pedal changes hands for far more than the original cost, so it was inevitable that EHX would revisit the idea. But the new, all-digital Attack Decay boasts additional features, including polyphonic envelope technology (derived from EHX's HOG2), which allows it to apply separate envelope shapes to overlapping notes.

This compact pedal sports eight front-panel knobs and two footswitches, and there are a few illuminated buttons for selecting Mono/Poly mode and saving/loading presets, which is made really easy. A small knob adjusts the pedal's trigger sensitivity, and three more small knobs are assigned to the built-in Harmonix fuzz. One footswitch works as a bypass, while the other flips between Harmonix and preset-selection modes, with a couple of LEDs indicating which mode is active. By default, this brings the fuzz in and out, but you can change it to step through the presets. On the left side are jacks for the output, loop return and expression pedal input, and on the right are the input jack and the loop send. A 200mA 9.6V DC power supply is included.

The fully digital Harmonix fuzz offers variable distortion and tone-shaping, which can lend a cello-like character to slow attack sounds, and this has its own mini gain, tone and volume controls. The effects loop allows other pedals to be inserted before the envelope shaper (by default), which allows the original clean signal to trigger the envelope for reliable operation. As with many current EHX pedals, there's an expression pedal/CV input — and of course the CV trigger option will allow this pedal to be used with a modular synth system. An expression pedal can be used to control the function of any knob on the front panel, with the precise behaviour set via the sort of hold-down-this, press-that, twiddle-the-other sequence with which we're all familiar. The larger knobs control Volume, Blend, Attack and Decay. Volume does just as it says but Blend can be switched to function as a wet/dry balance or a dry/Harmonix mix, and a third option allows you to mix the effects-loop return signal with the output of the envelope shaper.

If that were all you got for your money it would be impressive... but just a few button presses can turn the pedal into a repeat–cycling envelope shaper, rather like a tremolo with a very wide speed range and control of the attack and decay rates. And if you're feeling geeky, you can also separately adjust the shapes of the attack and decay curves from linear to parabolic or S‑curve, you can rejig the Bypass button to manually (pedally?) trigger the envelope, and there's even a sneaky internal compressor that helps keep the level up while the envelope does its thing — though, of course, you can turn this off if you prefer.

Before we start on the 'how it sounds' bit, I should draw your attention to a caveat from the designers: Poly mode is really designed for use with either the attack or the decay effect; using both at once in this mode can result in some odd noises, but you can do what you like in Mono mode.

"Poly mode is remarkably effective in changing the attack or decay of notes in an arpeggio or passage where notes overlap."

So how does it sound? In Mono mode, the triggering is reliable over a very wide range of input volumes. So even your quietest notes will get the required treatment once you've set the threshold to suit your playing. The envelopes, adjustable from four milliseconds to eight seconds, are just as smooth as in any analogue counterpart, and the fuzz also sounds very 'analogue' and suitably aggressive. In Mono mode you may have to damp notes between pick attacks to get the envelope to retrigger correctly, as with any mono envelope pedal, but in Poly mode you can play any way you like and each new note gets its own envelope, without killing other notes. Feed the output into an EHX Oceans 11 pedal set to Shimmer, dial in a slowish attack and you could easily bluff your way through a gig at a health spa or yoga class! Alternatively, you can set a fast attack and a fast decay to make your guitar sound somewhat like a banjo, or choose a slow attack combined with a fast decay to give you the 'reverse tape' sound.

Of course setting a slow attack might mean that by the time you hear the note at the end of the fade-in its level has dropped significantly, so you may need the volume control to get back to the level you need. You'll also find that the envelope controls need setting to different positions when in Poly mode to achieve the same length of attack or release, but this mode is remarkably effective in changing the attack or decay of notes in an arpeggio or a passage where notes overlap. The distortion/fuzz section sounds best fed through a guitar amp, but in the studio an amp emulator will make it sound believable — it's certainly useful to have it built-in to the pedal. Set carefully, you can even coax eBow-like sounds out of the Attack Decay.

Overall, then, I like the Attack Decay a lot. I've been looking for a reliable slow-attack pedal for a while, and this one more than delivers the goods for a very affordable price. All the bells and whistles will appeal to tweakers, but it also works wonderfully right out of the box.