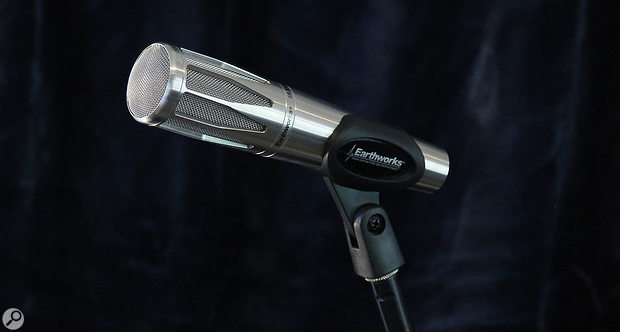 Earthworks microphones have always embodied a very distinctive ethos, aiming to capture sound with the highest possible fidelity across the widest possible frequency range, and laying particular emphasis on the accurate representation of transients. It's a philosophy which has won their omnidirectional studio mics many admirers, especially among engineers who favour a natural drum sound, and it's one that Earthworks have carried through into their range of vocal mics.

The first of these was the SR40V, a back-electret stage vocal mic that was reviewed back in SOS December 2011. This was followed last year by the SV33, another end-address vocal mic but one intended primarily for studio recording. Both of these are premium models with price tags to match, but now Earthworks have drawn on the technology used in the SV33 to create a more affordable counterpart designed for both stage and studio.

Like the SV33, the SR314 is an end-address mic that uses a small-diaphragm cardioid capacitor capsule; and, again like the SV33, its design is optimised not only to pick up the wanted audio with optimum clarity and faithfulness, but to reject off-axis audio evenly through the frequency range. The supplied frequency plot shows a polar pattern that is impressively consistent through the entire spectrum: it's almost perfectly cardioid at 400Hz and 6kHz, with a small rear pickup lobe developing between these points and a slightly greater tendency towards omnidirectionality from 12kHz upwards. Used up close, the on-axis frequency response is flat within ±3dB or so from 20Hz to 30kHz, with small dips at 4 and 8 kHz and a couple of bumps at 10 and 15 kHz. 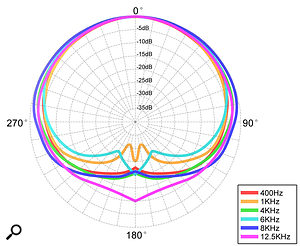 The SR314's polar pattern remains impressively consistent across the frequency spectrum.In terms of its other specifications, the SR314 is very similar to the SV33. It can accept sound pressure levels of up to 145dB, though Earthworks don't state what level of distortion is reached at that point, and sensitivity is a comfortable 10mV/Pa. The SR314 requires 24-48 V phantom power, and like all Earthworks mics, it draws the maximum permissible 10mA current. At the price, it's likely to be used in professional environments where this shouldn't be an issue, but it's worth knowing about if you take it out and about to unfamiliar venues.

The review SR314 was supplied in a simple fabric pencil case, with a plastic clip. You could argue that a mic in this price bracket should have a hard case, but I think one glance at the SR314's stainless steel shell would be enough to convince most people that it can take care of itself! However, the omission of an adaptor for 3/8-inch mic–stand threads seems a bit of an oversight.

One glance at the SR314 won't be enough for most people, in fact, because this is a stunningly good-looking microphone. The industrial design recalls the old Sennheiser MD416, with the solid part of the shell splitting into metal 'fingers' that enclose the grille, but without that mic's ball-shaped windshield. The polished steel finish is very classy indeed, and there's a sense of balance and proportion to the whole thing that just works. I'd go so far as to say that this is the best-looking stage mic I have ever used, and it never failed to attract positive comments from musicians. It can sometimes be a struggle to persuade singers to try a new stage mic, but they were queueing up to have a go on the SR314!

When they got to the front of the queue, the SR314 was also something of a sonic revelation for vocalists used to beaten-up SM58s. I tested it both live and in the studio, on male and female voices and on instruments such as acoustic guitar. Being capable of reproducing sounds down to 20Hz and below, it demands some respect from singers, and although the grille incorporates pop protection, strong plosives still get through when used up close. Apart from this, however, the SR314 proved remarkably tolerant of variations in distance: it was never muddy, and nor did it get thin as the singer moved away from the mic. Earthworks' claims about the off-axis behaviour of the microphone are also thoroughly vindicated in practice. Some say that capacitor stage mics are more prone to feedback than moving-coil models, but the SR314 remained blissfully immune. When I mixed a recorded show where I'd used it for the lead vocal, spill from other instruments was both low in level and remarkably natural in timbre.

"The SR314 stepped in where the likes of U87s and C414s had failed, and delivered a balanced sound with no fuss at all."

As for the vocal itself, the most striking aspect of the SR314 was its clarity. It's not really a mic that flatters singers, and in rock or roots-based music there will be a few performers who arguably benefit from a less revealing and more characterful choice. But what I was particularly struck by was how well the SR314 served female voices. I'm sure I'm not alone in finding that this can be a very unforgiving source, and one which is often poorly suited to the SM58 and other classic stage dynamic mics. By contrast, the SR314 just seemed to take even the most 'difficult' female vocal in its stride. It put across all the nuances of quiet passages, without ever becoming screechy or nasal when the time came to belt out the chorus; and it was always articulate without exaggerating sibilants. One female singer I've worked with a lot has a voice that is really hard to capture in the studio. Over the years, I've tried half a dozen studio capacitor mics with no success at all, and had ended up using a ribbon mic on the basis that 'a bit too dull' was easier to work with at the mix than sibilant, thin and harsh. The SR314 stepped in where the likes of U87s and C414s had failed, and delivered a balanced sound with no fuss at all.

There is no doubt that by the standards of stage vocal mics, the SR314 is an expensive investment. However, whereas Earthworks' SV33 is pricey enough to make it a purely theoretical proposition for most people, this new mic is more comparable with flagship vocal mics from other manufacturers. In the USA, for example, it costs the same as rivals such as the Neumann KMS 104 and 105 and the Shure KSM9, and is considerably more affordable than DPA's d:facto. It looks incredible, sounds excellent and is potentially as valuable in the studio as it is on stage, and if you are in the market for a high-end capacitor stage mic, you'd be foolish to omit it from your shortlist.

The SR314 isn't cheap, but once you've tried it, you may find it hard to go back to lesser stage vocal mics!