If you read my review of the Electro–Harmonix B9 Organ Machine effects pedal, their C9 will look very familiar, as it’s based on the same hardware — but this latest pedal offers different sounds. As I mentioned in the B9 review, it’s important to appreciate that the sounds are all produced by modifying the signal that comes from the pickup of a regular guitar, so there’s no sample triggering involved and no need for a hex pickup. This makes the playing experience very natural.

The C9 has a very simple set of controls, with a rotary switch selecting nine different preset sounds, separate level controls for the dry and effected sounds, and a pair of controls designated Mod and Click. These last two actually change function depending on which preset sound is active. The output can be a mix of organ and dry guitar if you wish, or you can use both output jacks to route the two signals to separate amplifiers. Power comes from an included power adaptor, though any Boss–style 9V, centre–negative supply capable of supplying in excess of 100mA may be used. (There’s no battery option.) As is standard on most effects pedals, there’s a buffered bypass footswitch with status LED. Using your guitar’s bridge pickup is recommended, so as to give the unit a harmonically rich input, though most pickup combinations work as long as you accept that the tone of the simulated organ is affected by the pickup tone.

So, what new sounds are on offer and how do they shape up? The first is a Tonewheel organ, for which Mod controls the speed of a pseudo rotary/chorus effect and Click emphasises the percussive edge of the note by adding extra harmonics. Essentially, then, this is a typical Hammond–esque sound. Next is Prog, again a tonewheel sound, but this time getting very close to that ELP Keith Emerson organ sound — think ‘Bus Fare For The Common Man’. Mod is, again, a pseudo rotary chorus, and Click adjusts the level of two intervals: a fifth above and an octave below.

Number three, labelled Compact, gives a good impression of a Doors–style organ sound; it’s based on the Vox Continental the band used for much of their career. The modulation is simple vibrato, while Click brings in more upper harmonics. 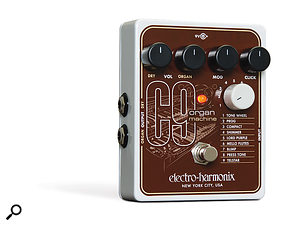 Shimmer is a slow–attack, fairly bright organ sound that can be set to fade up slowly behind your dry guitar part. This time, the Mod knob sets the fade–in time while Click purports to affect the sustain. I have to admit that, to me, it seemed to make little difference, but the slow attack effect was still very nice. There are no prizes for guessing what Lord Purple is all about. The Click control fades in another three drawbars; add some mild overdrive and you have the definitive rock organ sound.

The next patch isn’t actually an organ at all. The name, Mello Flutes, hints at its attempts to emulate a Mellotron flute, and it actually does a pretty good job. The right–most two controls adjust vibrato rate and depth. If ‘Strawberry Fields Forever’ or ‘Nights In White Satin’ are on your covers list, this is the patch to go for.

Blimp produces what’s described as Led Zeppelin–type sound, a drawbar kind of patch with a mid–range emphasis, for which Mod adds a rotary/chorus and Click brings in upper harmonics. The Press Tone preset, by contrast, is apparently modelled on the Beatles’ ‘Let It Be’ organ sound, with Mod and Click actually controlling what their names suggest.

That just leaves Telstar, based on the sound of the Clavioline, with Mod adjusting the vibrato rate and Click governing the level of upper harmonics. You’ll need to add lashings of delay and/or reverb if you plan on playing a cover version of ‘Telstar’ but, that aside, the sound gets very close to the real thing and also works well as a generic psychedelic–era organ for chord work.

Another operational twist that wasn’t present on the B9 is that on presets two, three, five and seven, for which the Click knob controls the level of extra ‘drawbar’ harmonics, this control works independently of the main Volume knob. I found this quite useful, as it allowed me to turn down the Volume control to hear only the added harmonics, with little or no contribution from the basic sound, thus giving me a lot of tonal flexibility.

So it’s a thumbs up for the sounds, but how about playability? The C9 does have some vices in this respect, but nothing you’d be likely to hear if played behind the straight guitar sound. There are no pitch–tracking issues of the type you hear with a typical guitar synth, as the sounds are all created by pitch-shifting and filtering what comes off the guitar strings themselves. Listen very critically, though, and you’ll hear that some of the artificially generated harmonics drop out before others, as the notes are allowed to decay. If you play single notes or double notes, the sustain time can be impressively long, but if you play a whole six–string chord some of the notes or their harmonics seem to fade away faster. You’re unlikely to hear any of that in a typical performance, but it does mean you may have to arrange your more exposed organ parts with care when working in the studio. Putting a compressor before the C9 will help even out the results and maximise sustain.

Using an external Leslie simulator or plug–in instead of the built–in chorus effect also gives a more realistic result on the tonewheel presets, especially if you make use of the speed–change function as part of the performance. The modulation and tonality of the rotary effect helps further disguise any small tonal anomalies when playing big chords.

Given the low cost and ease of use, the C9 is a seriously impressive device. It’s capable of uncanny emulations and doesn’t demand that you change your playing technique. If you already have a B9 and some space on your pedalboard, something like the Electro–Harmonix Switchblade will allow you to switch between the two pedals. I can’t wait to see if there’s going to be a D9! Paul White

Convincing organ sounds without having to use special guitars or expensive outboard processors. A genuine milestone in guitar processing.