Electro Harmonix's Freeze pedal performs much the same job as the freeze function on the Roland VG99 guitar synth: trigger it during the decay portion of a guitar chord and it will loop the sound to form an indefinite, smooth‑sounding drone, with an almost organ‑like quality. Although it fits into a 'nano' pedal format, it consumes too much current for battery operation to be practical, so it comes with a 9V DC power supply. Other than the input and output jacks, the box has just a single knob, a three‑way toggle switch and a footswitch, with a red LED to indicate when the freeze function is operating. The dry sound always passes through the unit at its normal level, and the knob controls the amount of 'frozen' sound added to it — so once you have a drone going, you can play over it normally. 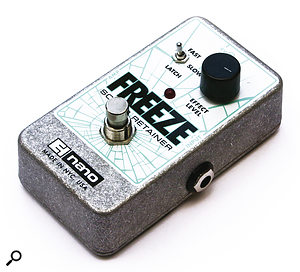 The toggle switch provides three modes of operation: Fast, Slow and Latch. In Fast mode, pressing and holding the pedal produces the frozen sound, which keeps running until you release the footswitch, at which point it stops immediately. Slow mode works in a similar way, but allows the drone to fade in a little more slowly, and to fade out again when the footswitch is released. Three different rates of 'slow' are available — the slowest fade time being just over three seconds — and you select them via a simple power‑on ritual. I found the middle setting, with its 200ms attack and one-second fade, the most comfortable to use.

Latch mode works much like the Fast mode, but you can take your foot off the pedal and the sound will continue to sustain. When you next press the switch, it freezes whatever you've just played — which is useful for creating continuous pads over chord changes. To bypass this mode, you simply tap the footswitch twice. There's no hard bypass, but to my ears there's very little sonic difference between having the pedal in circuit and not.

Providing you can keep your foot in sync with your playing, this pedal is simple to use and produces a very usable sound, with no giveaway end‑of‑loop glitches. For the smoothest results, wait a second after playing a chord to hit the switch. The resulting sound can then be treated using the usual array of modulation and delay effects, to add movement and interest.

In the studio, the Freeze pedal provides a practical means for guitar players to produce good-sounding pad parts, for treatment with rotary simulators to make them more organ-like, or with chorus for pseudo‑strings. Freeze may be a bit of a one‑trick box, but it produces a novel effect, and one that's not easy to achieve by other means. Paul White