The Flip Ultra HD promises high‑definition video recording in the palm of your hand — but does it live up to the claim? 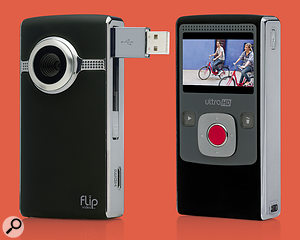 A few months back, I decided to dip my toe into the murky waters of video recording, by buying a Flip Ultra HD pocket camera. I bought my particular 8GB Ultra HD model back in May, though models have been updated a little since then! The 8GB model can record two hours of 720p HD video and operates for the same amount of time from its lithium‑ion battery pack, when fully charged. The battery is charged via a pop-out USB connector, but if you do find yourself running out of power mid‑project you can switch the battery pack for a pair of standard AA batteries, and carry on shooting. There's no expansion port for a memory card, so two hours shooting is a maximum before dumping to a computer via USB.

Carrying lots of separate bits and bobs is annoying, so a fully‑functioning camera that slips into the pocket like this is a very attractive proposition. In case you're worried about keeping it safe, you also get a thin fabric bag with the camera. I've lost that already, so I use an iPod sock!

The latest version of the Ultra HD records at 1280 x 720-pixel resolution, and models from September 20th 2010 onwards all use H264 video compression and AAC audio compression, and employ the MP4 file format. The newest 8GB, two-hour model (but not the cheaper 4GB model) also includes image stabilisation and a feature called FlipPort, which lets you plug in external accessories, such as a wireless mic. My own model doesn't have this refinement.

All the Flip cameras also include the required video player and codec installers, stored in the camera's memory rather than on an external CD-ROM installer, which is extremely convenient.

The camera is very simple to operate, with a fixed‑focus lens, a big red button to start and stop shooting, and a four‑way cursor pad. A power button on the side of the camera turns it on or off, and you're all ready for shooting within a couple of seconds of powering up. The four‑way pad can be used to operate the 4x digital zoom during filming. The zoom travels at a fixed rate and, being electronic rather than optical, results in a loss of resolution as the zoom level is increased. Two further buttons are used for replaying clips and deleting unwanted ones.

Moving backwards or forwards through the clips you've already taken is accomplished using the left and right cursor buttons during playback. A small (around 30 x 42mm) but very clear colour screen shows you what you're shooting and is also used to play back clips. A user preference lets you decide whether the red 'shooting' LED on the front of the camera should light during recording or not, and this little LED doubles as a charging indicator, too.

The accompanying Flipshare software package is used to transfer files from the camera to the computer, and to allow basic editing and assembly of the clips to form a complete movie. It allows basic start and end titling, as well as simple editing of clips.

Once the camera is connected to a computer, the clips are displayed in a window, and you have the option of importing them while also leaving them on the camera, or clearing the camera after importing the clips. They are stored in folders labelled by month, depending on when they were recorded, which is very easy to grasp, and also helps to keep things nicely organised.

Editing is very basic, and comprises dragging the clips into the project window in the order you'd like them to run in, though you can re-order them by dragging again, if necessary. You're given the option to insert start titles and end credits, and the only transition available is a fixed‑time, fast crossfade that feels fairly comfortable. Most importantly, the resolution of the edited video doesn't seem any worse than that of the individual clips, which is not always the case when importing into a third‑party editing program. For example, you can drag clips directly into iMovie but the quality suffers very noticeably.

Your finished FlipShare video can then be saved as a new file, with further options to post it online as a movie greeting card or online-hosted movie, or burned to a video DVD. You can also extract stills from your video clips at decent snapshot quality.

When I first bought the camera, the software's clip transitions were very messy, but with the latest update they've become much smoother. It's worth updating Flipshare when updates become available, and the software kindly informs you of these when your computer is online.

While the camera is technically HD, the very basic optics and low-cost electronics mean that footage isn't quite as sharp as that of dedicated HD video cameras. Still, at laptop screen sizes the picture quality is certainly good enough for YouTube and other on‑line services, especially where music is the main focus of the video. I was also impressed by how well the camera performed indoors at domestic lighting levels, though footage is slightly less detailed than when shot in bright daylight. 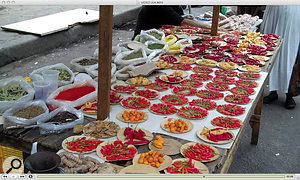 Daylight pictures are sharp and colourful, while low-light images are less detailed. 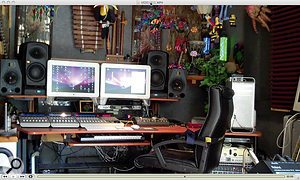 The fixed‑focus lens means that there's no annoying auto‑focus hunting, and the picture remains sharp at distances down to around half a metre. Of course, this system precludes any sophisticated depth‑of field tricks (to put the background out of focus, for example) or other tricks such as shifting focus between one object and another, but at least it's one less thing for the novice to worry about.

The biggest challenge turns out to be keeping the camera steady, as its small size and light weight lend it no stabilising inertia. This is particularly noticeable when starting and stopping recording and when operating the zoom. There's a standard tripod thread in the base of the camera, so attaching a flexible tripod (such as a GorillaPod) will help. I also cannibalised an old lightweight tripod to make a monopod, which yields a great improvement over working hand‑held. When used outdoors, the built‑in mic is quite susceptible to wind noise, but other than that, it works well enough for routine tasks such as close‑up dialogue recording.

While the included Flipshare software allows you to edit a perfectly respectable movie from consecutive clips, it is less than ideal for music use. There's no timeline, and as such no way to perform insert edits and break up a full‑length, fixed-camera shot of a musical performance. You also have to edit the length of any accompanying MP3 audio that you add, because if it is longer than the video, it will just stop dead at the end of the movie. An auto‑fade‑out option would be useful for knocking‑up simple holiday videos, or other visuals that run alongside music but don't have to be synchronised with it.

As with most cameras, the LCD screen is hard to see in bright, outdoor light, but it's fine for indoor use. I also found that while the camera charged perfectly from my Macbook Pro, the two mains‑powered USB chargers I have didn't seem to work too well, with the camera never becoming fully charged. It seems a touch fussy in that department! The matte, rubberised coating is also wearing off the case in places, so protection may be a good investment.

Despite its technical limitations and very basic editing software, the Flip Ultra HD has proven to be a great introduction to video recording. It lets you learn all the basics of framing shots, panning and editing, before moving on to something more 'grown up'.

There's no additional memory card to buy and no cables to lose, so everything is very self‑contained and simple. Its picture quality exceeded my expectations and is fine for pretty much any online publishing application, though for making more than the most rudimentary music videos, third‑party editing software is pretty much essential. Best of all, since it is smaller than most phones, you can keep it in your pocket, so you can capture the unexpected!

There are plenty of alternative pocket video recorders available, having different resolutions, strengths and weaknesses. Zoom's Q3 includes high‑headroom and high-quality audio recording, and the new HD version records up to 1080p. For those interested in recording underwater, or even on a racetrack, GoPro's HD Hero will give you the ability to make a video in almost any conditions.

The built‑in mic works well enough for 'snapshot' recording, and is also fine for sync line‑up purposes when capturing main audio to a separate recorder. Unfortunately, it has an automatic gain control that can't be defeated, so it doesn't deliver particularly good results for music. It does, however, handle a wide range of decibel levels pretty well, from basic dialogue to a live band as heard from the audience. If you put the Flip too near the loudspeakers, it gives up and overloads, but that's hardly surprising. One potential complication is that the audio is recorded at 44.1kHz, whereas 48kHz is the standard for video work, so you may have to jump through a few conversion hoops if you want to work in a more professional video editing program. Be sure to check!

The Flip Ultra HD may be basic, but it can deliver surprisingly good results and is useful when learning basic video techniques. While the included software is great for knocking up quick holiday videos, you'll need something a bit more sophisticated to create professional‑looking music videos.