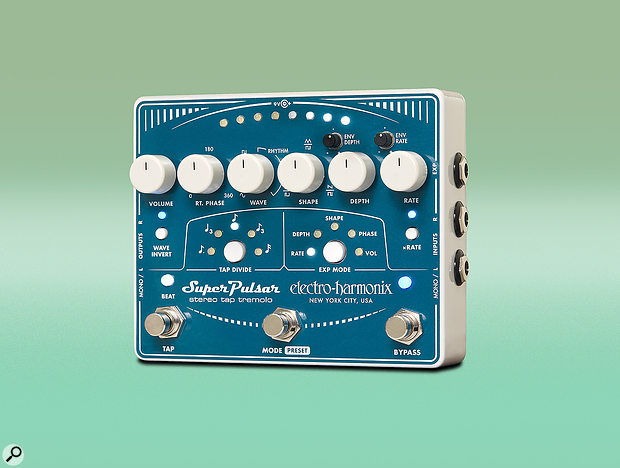 Is the Electro-Harmonix Super Pulsar the most sophisticated and versatile tremolo pedal money can buy?

Every guitarist knows what a typical tremolo effect is like — a rhythmic pulsing in level at a user-adjustable speed, and with a modulation waveform that’s usually something close to a sine wave. The Electro-Harmonix (EHX) Super Pulsar takes this concept to extremes, adding tap tempo, the ability to modulate the tempo from the envelope of the input signal, a range of modulation waveforms, programmability (eight user patches), and the means to create rhythmic modulation patterns of up to 16 steps. The pedal can be set up with any combination of mono or stereo ins and outs, and you can even hike the modulation rate, to produce an effect akin to a ring modulator. The modulation effect is analogue but with digital control.

Housed in a metal box, the Super Pulsar features instrument-level jack inputs and is powered from its included 9.6V centre-negative DC power supply. (Battery operation is not supported). The front panel has rather more controls than you might expect of a tremolo, but not enough to be daunting. The available modulation waveforms are based on sine, triangle and pulse waves, and there are nine rhythmic patterns that can be edited and saved to suit your needs. For these, the modulation waveform is a pulse wave, and the user is offered full control over the pulse width.

The modulation speed can be dialled in using the Rate control, set using the Tap footswitch in conjunction with the Tap Divide (musical note value) rotary selector, via an external footswitch, or via an external clock pulse — the Tap/Clk jack can function as a clock input, accepting a nominal 5V pulse. When using the pedal in stereo configuration, the right channel’s phase is fully adjustable relative to the left’s, so you can go from tremolo to panning.

That ability to set the modulation rate and depth to be influenced by the incoming signal level really is musically interesting. For starters, it means you can set up a slow tremolo that speeds up as the level decays, or vice versa. But, additionally, by using the envelope to control modulation depth, you can apply a tremolo that starts off shallow and then gets deeper as the input decays, or vice versa. Yet further control is possible via the EXP jack, which can accept an optional expression pedal (details of acceptable resistance ranges are in the manual) or can accept a CV signal to influence the modulation rate, depth, shape, phase or level. A scanning eight-LED display set in the top of the case reflects the modulation rate and the wave shape and is also used in the rhythmic modes to show the chopping pattern. When in bypass mode, the signal is routed straight from the inputs to the outputs using relays.

The six large, white knobs control Volume (with up to 12dB of boost), Right Channel Phase, Shape, Depth, Rate and Waveform, the last one selecting the basic wave type or, in rhythmic pattern mode, adjusting the pulse width. Shape modifies the selected wave shapes and also selects between nine patterns when in Rhythm mode. When using the ‘straight’ modulation mode, square waves can be adjusted in width, sine waves can be bent out of symmetry for those old ‘bias tremolo’ effects, and triangle waves can be morphed into rising or falling ramps.

Two smaller, centre-detented rotary controls set the degree to which the depth and rate of the effect (in either positive or negative directions) is to be controlled by the input envelope, while four buttons select Wave Invert, Tap Divide, the destination of a connected external EXP controller and xRate, the last one being used to step through three modulation speed ranges. The fastest speed produces ring-modulator-style warbles. Status LEDs around the middle two switches show the currently selected options.

Pumping On The Stereo

Usefully, in Stereo In or Stereo Out mode, the Wave Invert button affects only the right channel’s modulation waveform so that you can have, for instance, a rising sawtooth ramp in one channel and a fast-attack falling ramp in the other, to add greater complexity to the sound — and that’s before you add in the phase adjustment I mentioned earlier. Over the three xRate ranges, the modulation rate can go from one sweep in 16 seconds to 230Hz.

Three footswitches are used for performance control. Tap and Bypass, both of which have LEDs, are largely self explanatory but there’s also a Speed Brake function, activated by pressing and holding down the Tap switch, in which the longer you hold, the slower the modulation rate will become — it then climbs back to its previous rate when you release the switch.

The Mode switch in the centre has two different, well, modes of operation. In Normal mode, which is the default setting, you can set the switch to double up on the functions of Tap Divide, Exp Mode, xRate or Wave Invert switches (Tap Divide is the factory default). In Preset mode, the footswitch is instead used to step through the eight presets. The setup routine involves pressing and holding the designated buttons until the LEDs give confirmation that you’ve switched mode. Changes are remembered at power down, and it’s probably an idea to keep the manual (a hard copy is provided, but it’s also available as a PDF) to hand at first, as there are several operations that aren’t immediately obvious.

In Preset mode, the settings of every knob and button are stored along with designations for the external control inputs and any custom modulation rhythms. Creating custom rhythms involves more simultaneous button pressing and using the waveform LEDs to navigate — in this way, each beat of up to 16 steps can be turned on or off. Custom patterns overwrite the factory patterns, though, reassuringly, there’s a routine for restoring the factory settings if you get yourself into a mess!

Don’t worry if some of the deeper functions sound a bit scary, as just using the more obvious features of the front-panel controls plus the preset rhythmic patterns offers you plenty of scope for experimentation. Having a tap-tempo switch makes it easy to keep the effect running at the right speed. The quality of modulation is excellent and can emulate classic tube-amp tremolos, with their asymmetric sweep waveforms, very accurately. The rhythmic patterns provide instant gratification for Who-style sequencer effects and, of course, there are all those wonderful stereo modulation and panning options available if you have the luxury of two amps. The modulations that change with envelope are also quite usable and, while I’m not much of a one for ring modulation on guitar, you can call up a growly gargle should you wish. In fact, my only niggles are minor: first, there’s no clear way to see which rhythm pattern is selected; and, second, I found the mini-knobs for the envelope-controlled rate and depth to be rather small and fiddly.

To program your own rhythms or to hook up external controllers, you’ll need to refer to the manual, but you’ll probably only need to do it once. In an ideal world there’d be a USB socket so you could program all this from a computer but EHX have opted instead to keep the price as low as possible, which is probably wise. Indeed, they could quite easily have left off all the programmable features and still satisfied a great number of users. It’s very creditable that instead they went to the trouble of adding some fairly deep programmability for the benefit of those musicians who want something a little more individual. EHX claim this is the most sophisticated tremolo pedal available and there are certainly very few devices that can compete for that title, and none which offer everything this pedal does.

The world’s not short of traditional tremolo pedals, but the Super Pulsar is capable of so much more than them. The Sonuus Voluum is an equally sophisticated yet rather different pedal which may be worth investigating if you don’t require stereo operation — it’s a mono, analogue VCA-based pedal whose digital control makes it capable of all manner of complex level modulation effects.

The EHX Super Pulsar is a hugely versatile tremolo pedal that offers both instant gratification and deeper programmability.