Although by no means useful only on drums, SPL's Transient Designer was something of a revolution in drum processing: rather than relying on a signal exceeding or falling beneath a level threshold to trigger its action, as most dynamics processors do, it was able to detect transients, whether at high or low level. This meant that the device could give the user separate control over the attack and sustain portions of a sound. In practice, what that meant was that you could make a drum-kit piece (or even a stereo drum bus), sound more or less aggressive at the note onsets by using the attack control, and had at least some control over the amount of body and ambience via the sustain knob. There have been imitators in the ensuing years, in both hardware and software form, but not that many have added much to the concept, the notable exceptions being in software form, including Eiosis' Transienter, and a few multiband plug-ins, such as Melda's MMultiBandTransient. 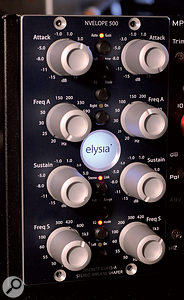 The latest outboard product to run with the concept — Elysia's Nvelope 500 — is a little different. Available only in API 500-series format as a 2U Lunchbox module, the Nvelope 500 can be used either as a full-band or a two-band processor, and it's thus able to provide a greater degree of control over the sound than typical transient-shaper processors. This aspect of the Nvelope isn't radically new, of course — there are plenty of plug-ins that have gone there before. But no ICs are used, and the Nvelope 500 operates in Full Class A mode, which Elysia claim means the crossover produces no distortion — and certainly there were no audible nasties during my tests, only the desired changes to the signal, even with quite radical settings. In fact, the crossover sounded so smooth and natural that I was able to deploy this device on much more complex material than I'd usually consider suitable. I even achieved good results on a stereo mix.

What makes this design truly unique, though, is that it also doubles up as a very classy-sounding high- and low-shelf analogue EQ. Furthermore, the two channels can be put to use either in linked stereo or dual mono modes (whether as a full- or dual-band transient shaper, or EQ); or as a mono channel comprising both transient shaper and EQ, by using one channel fed into another.

In operation, some of the subtleties of the design became apparent. The full-range and dual-band modes are slightly different, for example, the key difference being in the application of the Freq A control. In full-band mode, this acts, effectively, as a side-chain EQ, with a higher setting making the attack stage less responsive to bass signals; whereas in dual-band mode, it is used to set the start frequency for attack processing. I found both facilities to be well judged and useful.

It's difficult to get across via the written word quite how useful and versatile this processor is. It offers far more control over the transient-shaping process than any of SPL's Transient Designers, and the EQ is a great bonus feature that means you're likely to get a lot of use out of this module.

For some people, the ease of recall and requirement for automation will mean that a plug-in will be more to their taste, but the Nvelope 500 is so intuitive to use compared with any of the more complex plug-ins I've tried (who knows, perhaps there's a plug-in version down the road, as with previous Elysia processors?).

If you need a couple of channels of simple yet high-quality analogue EQ and/or transient processing, then, this seems like a bit of a no-brainer purchase, as long as you can afford it. Speaking of which, the price isn't exactly steep considering what's on offer here — two channels of two different processors. Some manufacturers would charge you the same for a single channel of EQ! Recommended. Matt Houghton