Eve are a very new name in studio monitoring but, as this active nearfield model proves, they've got a wealth of experience behind them... 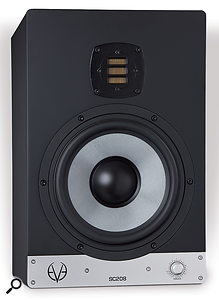 If you haven't heard the Eve name before, that's because they are a relatively new company in the monitor market, founded in 2011. The more observant amongst you could also be forgiven for thinking that the folded-ribbon tweeter suggests some kind of Adam connection, which there is: Eve Audio was set up following something of a schism at Adam, with CEO Roland Stenz leaving to become Eve's principal designer. But, despite some cosmetic similarities, Eve's approach to monitor design is quite different from that employed in the current Adam range.

The SC208s reviewed here are the largest in Eve's series of two-way monitors, which includes models based around four-inch, five-inch, six-inch and (as in the SC208) eight-inch woofers. These speakers are aimed at the nearfield user who needs to hear full-range audio without having to add a subwoofer. Although the company are also building larger monitors and a complementary range of subwoofers, their two-way speakers are the first to come to market.

DSP, rather than analogue circuitry, is used for all the crossover and processing functions, and the power amplifiers use PWM (Pulse Width Modulation) technology. Even the folded-ribbon tweeter is designed unusually, the RS2 model used by Eve featuring a larger front plate and a more powerful magnetic motor than other designs. There are three large apertures in the front plate, with a magnetically attached, fine, hexagonal grille offering protection from small objects (this grille can be removed if preferred).

The 150W PWM amplifier feeding the woofer is set up to deliver a short-term maximum output power of 200W, allowing peaks of up to 112dB SPL at one metre. A separate 50W amplifier feeds the ribbon tweeter, and both amps feature in-built protection limiting. The rear-facing bass port is a large, rectangular slot designed to minimise port compression and wind noise at higher SPLs.

The bass response of the SC208 is specified down to an impressive 36Hz (-3dB), delivered by what Eve have named their SilverCone woofer. This is powered by a 1.5-inch voice coil designed to ensure plenty of linear excursion. A honeycomb cone material with a woven glass-fibre skin is used to combine stiffness with low mass, and the cone is suspended in a roll surround. This crosses over at 2.8kHz to Eve's AMT RS2 folded 'Air Motion Transformer technology' ribbon tweeter, which takes the highs up to 21kHz (-3dB).

Measuring 255 x 390 x 330 mm and weighing 10.9kg, the black cabinet has an understated feel, with only the metal control-plate at its base giving it a strong sense of identity. The cabinet body is made from 18mm MDF with a textured 'foil' covering, while the baffle is painted satin black. Both drivers are recessed into the baffle, centrally mounted so that there's no need for 'left' and 'right' models, while the cabinet edges and corners are only slightly rounded.

Although the circuitry is largely digital, the inputs are analogue on both balanced XLR and unbalanced RCA sockets (but no jacks), feeding into a high quality Burr-Brown A-D converter. The DSP links directly to the power amplifiers, with no further stages of conversion required. DSP takes the place of the volume, filter, phase and room-placement controls, the parameters for which are accessed via a single push-and-turn knob on the front panel. An LED ring (dimmable to taste) around the control shows the status of adjustment. Once made, settings for volume or room adaption can be 'locked out' individually, using a pair of DIP switches located on the rear panel, to avoid tampering. Power comes in via the usual IEC socket, and there's a voltage selector switch for 115/230 Volt operation. 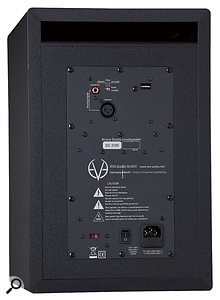 The rear panel houses the balanced and unbalanced inputs, as well as DIP switches for locking the speaker's filter and volume settings.

All the settings — volume, the various filter settings and LED brightness — are made via the rotary control on the front panel. Pressing the knob causes one LED to come on and to flash alongside the name of the function to be edited. Turning the knob allows a different function to be selected, and pushing the knob again puts you into the mode to adjust that setting. All the setting names are printed next to the corresponding LEDs at the start of the LED ring, but these are extremely small and difficult to read. Still, you probably only need to set them once. If you leave the control alone for a while, it automatically reverts back to volume adjustment. I was rather hoping for some kind of cunning link system that would allow the volumes of both speakers to be adjusted from a single control, but this seems not to be available. Again, though, once the levels have been set, any further level changes are likely to be made via a separate monitor controller.

The input gain can be adjusted from off to +6dB, while the high shelving filter has a range of -5dB to +3dB above 3kHz. The low-shelving filter has the same range and operates below 300Hz. Such controls are fairly standard, allowing the monitors to be tuned to the room acoustics and proximity to boundaries, but Eve have gone further by adding adjustments to help counter the effects of mounting the speakers above a reflective desk's surface. These filters allow boosting of up to +3dB at 80Hz, and also a cut of up to -5dB at 300Hz.

Tested alongside my own Adam A7Xs and my Event Opals, and with everything set flat, the overall character of the SC208s tended to lean more towards that of the Opals than the A7Xs. At the low end, this is understandable, because the A7X is a smaller speaker with a little less bass extension. Although the SC208 cabinet is ported, the designers have seemingly played it safe with the port tuning, so as to retain a tight bass sound with minimal 'overhang'.

The performance of the ribbon tweeter sits somewhere between the heightened detail of the A7Xs and the smoothness of the Opals, making it very revealing but not overly forward or aggressive. Good mixes sound fabulous, but poor mixes have nowhere to hide! Indeed, I found these speakers particularly good for revealing the distortions and tape artifacts on albums remastered from '60s and early '70s studio recordings, and even on old classics such as 'My Generation' by the Who, you get a very clear sense of the plate reverb being used (as well as tape degradation distortion, unfortunately), something that doesn't always come across well on less detailed speakers.

The more material I tried with these speakers, the more I came to appreciate their candour. Quality differences between mixes show up really well, yet the speakers remain comfortable to listen to and, more than that, they are musically involving, with a good sense of detail and space in the mid-range. There's also a strong sense of both stereo width and front-to-back depth, along with great vocal clarity.

Every monitor design is a compromise, of course, but on balance I'm extremely impressed with the SC208s, and while they aren't exactly budget speakers, they do perform extremely well within their price range and meet the need for critical mixing, in that good mixes sound good and bad ones don't! At least with these speakers you'll know when you've got it right.

Eve may be a new company, but it is quite clear that there's a lot of design expertise and experience behind their monitors, as well as a good sense of where to spend the money. For example, a plain MDF box may not be the most attractive thing on the planet, but choosing that approach does allow the designer's budget to be spent where it is most needed — on the drivers, amplifiers and DSP crossover. It's just a shame these monitors are in so much demand that I can only use them for a week!

In this price range, the main competition comes from the likes of Genelec, Focal, Neumann (formerly Klein & Hummel) and, of course, Adam.

While not every project studio owner can afford monitors in this price range, the SC208s stand up very strongly against the competition in their market and deserve to be taken very seriously. Their wide frequency range delivers large-monitor performance in a nearfield package.