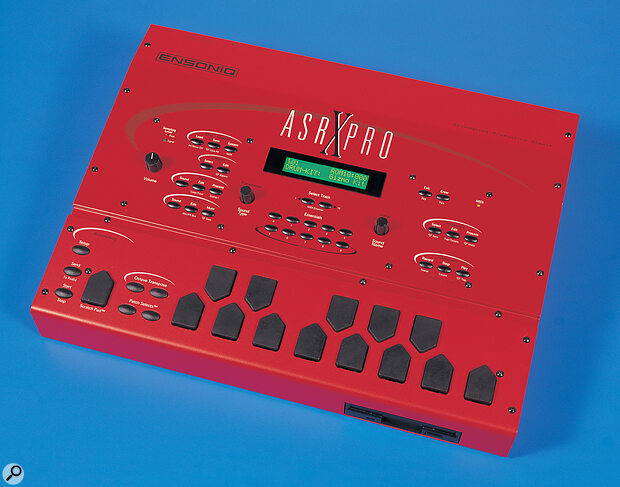 The ASRX, Ensoniq's entry into the world of all‑in‑one sampling and sequencing workstations, has just received a major upgrade and a fresh lick of paint. Chris Carter finds out whether the improvements justify its new 'Pro' label.

It's been about 18 months since the release of the original Ensoniq ASRX Advanced Sampler/Resampler, and it has gained a dedicated following, if not a particularly high profile. This new version, renamed the ASRX Pro Resampling Production Studio, includes a few brand‑new features and improves on some of the original's shortcomings — the 'New ASRX Pro Features And Improvements' box contains a list of the major changes. For a full operational rundown of the original ASRX you'll need to read my earlier review (SOS September '97), or take a look at the list of features common to both the ASRX and ASRX Pro in the 'Common Features' box.

Devil In A Red Dress

The rear panel now with SCSI as standard.

The most immediately obvious difference is the matt‑finish flame‑red case, which is actually a pleasant change from the original black and makes reading the function buttons slightly easier, though for some reason Ensoniq still insist on using a very small point size and a hard‑to‑read colour for many of the button names. Housed in the same type of slightly industrial‑looking steel case as its predecessor, the ASRX Pro is robust enough for gigging and heavy enough to survive the occasional drop by a careless roadie.

Physically, the ASRX Pro is about 90 percent as the original; as well as having the same case, it has the same knobs, pads, floppy disk, display and audio and MIDI connections. The most notable difference (apart from the colour) is the introduction of 10 new Essentials buttons below the LCD, where the Track edit buttons used to be, and the consequent rearrangement of the left‑hand button bank to include the ousted Track buttons.

The Essentials buttons allow instant access to 15 of your favourite sounds, patches or drum kits (five are called up by pressing the top and bottom buttons simultaneously). This is a very useful feature, particularly as favourite setups can be saved to flash RAM, floppy or hard disk with any songs, sequences or projects you may be working on. The Essentials buttons are also used as a numeric keypad for quickly accessing patterns and tracks when in Sequencer mode.

The rearrangement of the access buttons for Disk, Effects, Tracks and Pads into a block (on the left) is more logical and makes finding your way around while editing slightly easier, though there are still no dedicated cursor buttons, and new users may find navigating the endless editing screens confusing using just function buttons and the Parameter and Value knobs.

A SCSI 2 interface (a 50‑way, half pitch 'D' type socket) is now included as standard, rather than as an expensive optional extra. The ASRX Pro can read Ensoniq ASR10 and EPS, Roland S770 and Akai S1000/1100 sample data over SCSI, but not program data or Akai S3000 data. Support is also included for reading standard IS0‑9660 CD‑ROMs containing Mac AIFF and PC WAV files. The SCSI interface also includes improved compatibility with most hard drives and removable media, including Zip and 3.5‑inch optical. The Ensoniq web site includes a list of compatible drives.

The old limit of only 34Mb of RAM has been almost doubled to 66Mb. This is a more realistic figure for general sampling use, but could still be considered on the low side for some of the sampling and resampling tasks to which the ASRX Pro is otherwise ideally suited. The ASRX Pro is a RAM‑based dedicated workstation, and is very adept at fast 'on‑the‑fly' resampling of songs and musical ideas (from samples, ROM sounds, effects, sequences and so on) — unlike a software/hardware combination such as a computer running Cubase VST, which writes directly to hard disk when recording/sampling. So, because of its speed and ease of use, the ASRX Pro makes an ideal tool for remixing dance tracks, which can often involve sampling entire stereo mixes, spinning in sampled loops, breaks and sequences, resampling the whole lot, and so on. Add together all this RAM‑based activity (simultaneous sample playback and resampling), however, and you begin to see what sort of strain could be put on 66Mb of RAM. Hopefully this limit can be increased with the next software revision.

Two new compositional features are Pattern Mode, for cueing sequencer patterns and triggering them in real time, and Song Mode for chaining sequences together by creating a playlist of up to 200 steps per song from 128 sequences. Both of these additions work well, particularly Pattern Mode, which is great for trying out different song structures and live jamming or improvising.

A welcome addition to the sample wave edit menu is time stretching, o(r 'Scale Time?' as Ensoniq call it. Only two parameters are available — Amount (50‑1000%!) and Quality Low, Medium, High). Using the High quality setting retains the sound integrity impressively. In fact, time‑stretching on the ASRX Pro is probably the best I have heard outside a computer environment, with very few digital artifacts at the best setting. However, the length of time taken to process even a short mono sample is unbelievable — we're talking Atari ST speed, definitely not Pentium or G3. As an example, a 2.5‑second stereo loop stretched to twice its length (200%) took an incredible 46 minutes and 42 seconds to process, long enough to enjoy a leisurely walk to the shops and back — and there's no way to stop or exit the procedure once it's underway, other than turning the machine off.

The new Stomper option is a non‑real‑time subtractive synthesis algorithm (created by independent programmer Hakan Andersson) which allows you to make your own 'vintage‑synth‑style' (sic) samples from scratch. Each sound can contain up to four oscillators (each using sine, square or saw waves) and/or low‑pass filters. The sound is constructed using 12 parameters per oscillator and four parameters per filter, with familiar (and unfamiliar) parameter names such as: Waveform, Noise Factor, Start Freq, Amp Curve, FreqCurveShape, Start Cutoff and End Resonance. By adjusting these values you can build up a sound, or use one of six preset drum templates as a starting block. When you've entered all the parameters (which can be 40 or more), you press the Enter button and sit back and wait for it to be processed into a sample.

To be honest, I found Stomper a disappointment. Having previously seen the Stomper web site, I suppose I was expecting more than the ASRX Pro can realistically offer in terms of processing power and visual feedback. Part of the problem lies in the fact that Stomper is based on a Windows PC program using a graphical interface, which usually runs under the wing of a Pentium processor.

Maybe I'm missing the point somewhere, but blindly inputting numbers (none of this can be done in real‑time, remember) and watching a progress bar for two to three minutes, waiting to hear often unpredictable results, removes any spontaneity from the process, and is about as uncreative as it gets. Admittedly, it can sometimes produce interesting grungy/vintage sounds, but Ensoniq need to include more preset templates (only six drums, no matter how good they sound, is insultingly few), some better documentation — and what about some example settings to point users in the right direction, or some examples on floppy disk? It also bothers me that Stomper is at odds with the rest of the ASRX Pro, which is so fast and easy to use. If Ensoniq could make programming Stomper more visual and speed up the rendering process it would be a useful addition to the ASRX Pro, but in the meantime my advice is to buy a decent sample CD of analogue sounds and use the Pro's superior and faster sampling capabilities to achieve quicker and more predictable results.

I hope this review doesn't appear too negative because, slight operational challenges aside, I am quite an admirer of the ASRX and now the ASRX Pro. It's well built, and offers outstanding sound quality, fast sampling and resampling, top‑notch multi‑effects and reverbs, a very well‑specified MIDI sequencer and MIDI spec, decent‑sized velocity‑sensitive pads, easy song construction and relatively straightforward editing.

Nothing moves quite as fast as technology, however, and the sampler/workstation market is no exception — so the ASRX Pro comes across as a little dated (notably in its internal ROM sounds, which are the same as those of the original ASRX) and not quite the state‑of‑the‑art upgrade it could have (and should have) been at this price. One of the most frustrating aspects of the original ASRX was the pitifully small display, and using this hasn't been improved by including yet more editing options to navigate in the Pro version. I imagine this is why Ensoniq have included 10 new function buttons, but a more detailed display would have been far more useful on an instrument of this complexity. It's also a shame that there's still no digital I/O option.

But hey, let's not dwell too much on the minus points, because there's no denying that this is a very professional tool. I don't think I've ever used another sampler/synth/sequencer setup that's as fast, stable and easy to bash out ideas on (literally) as the ASRX Pro — you don't even need a MIDI keyboard! Familiarity is everything, and once you've sussed your way around its inner workings you'll be the envy of PC users everywhere, because while they're struggling to record and sample using buggy convoluted software, you'll be sampling, resampling, composing and laying down tracks in the blink of an eye. It's probably not the best choice for beginners or dabblers, but if you are serious about making music in the studio or on stage, and think you can live with the ASRX Pro's idiosyncrasies, I can recommend it to you. At £1499, however, it might be considered somewhat overpriced compared to the current knockdown price of £750 for the original, soon‑to‑be‑discontinued ASRX — which, with the new software upgrade, is almost a match for the Pro. Think carefully before you decide which one to go for, but either way, I doubt you'll be disappointed.

The major new ASRX Pro features are not available as an upgrade to existing ASRX owners, owing to the obvious (and not so obvious) hardware changes. However, a new upgrade (OS v2.62) has recently been announced for current ASRX owners, giving them some of the benefits of the new machine. These are marked below with an asterisk.

Other than a small handling charge, the upgrade is free, and details of how to obtain it are available on the Ensoniq web site or from your local Ensoniq dealer.

The main new features and improvements implemented in the ASRX Pro are:

The ASRX Pro excels at fast and easy sampling/resampling and song construction, and the quality of sound can't be faulted. Though Ensoniq haven't addressed all of the ASRX's flaws, the new additions and improvements are welcome and improve its versatility. A Pro upgrade for pro musicians — but at a pro price.