US-based company Equator Audio build all their studio monitors around the common theme of coaxial drivers — in other words, the tweeter is in the centre of the bass/mid driver. This topography, most famously applied by Tannoy, ensures consistent time alignment between the two drivers, even when the listener moves off axis, but it is not without its technical challenges.

Equator divide their studio monitor speakers into two product lines: the more powerful (and more costly) Q series, which is designed for mid- and far-field use, and the D series, intended for nearfield work and priced to appeal to home-studio owners.

The D8s reviewed here are the latest in the D series line, which also includes 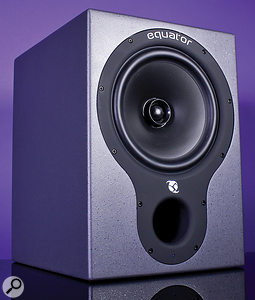 a five-inch version (the D5). Employing an eight-inch-chassis LF driver, the D8's polypropylene cone itself measures around seven inches, including the roll surround, and has mounted in its centre a silk-domed, one-inch tweeter.

Measuring 14 x 10 x 12 inches, and finished in textured grey paint, the cabinet is front-ported, with the 2.5-inch vent opening being part of the extended driver trim ring, which is fitted to smooth the transition from the driver chassis to the baffle. All the box corners are slightly rounded, which helps reduce cabinet edge diffraction, and there's a blue power LED visible at the bottom of the trim ring when the speakers are running. Each speaker weights 22lbs.

Power comes from Class-D amplification totalling 100W (60W for the lows, 40W for the highs). Driver protection and amplifier protection, for both short-circuit and excess-heat conditions, is built in. The combination of driver, cabinet and amplifiers delivers a frequency response of 44Hz to 20kHz (±3dB), and the maximum SPL is quoted as 106dB at one metre, which should be more than enough for comfortable near-field listening.

The rear panel houses the input connections (both balanced XLR and balanced/unbalanced TRS jack). Also around the back is a level calibration control, which is stepped to make left/right matching easier, and there are three boundary voicing settings to help manage the bass-response changes caused by placing the monitors close to a solid wall. Position 1 introduces a 2.5dB cut between 1kHz and 44Hz, and is suited to using the speaker close to a wall, where the roll-off helps counteract the bass build-up that results from siting the speaker close to a reflective boundary. Position 2 is essentially flat, for situations where the speaker is used further from a wall. Position 3 is again tailored for setups where the speakers are located well away from boundaries, so again there's no bass cut, though there's a gentle dip at 150Hz, augmented by a gentle HF rise starting at 6.5kHz.

D Is For Digital

DSP plays an important role in the D8's design, with the coaxial drivers being fed via a digital, fourth-order crossover (the actual crossover frequency is not specified). The designers cite midrange clarity as being a particularly important factor, so they also use DSP to implement a group-delay filter, which optimises the phase response in the 900Hz to 3kHz midrange area where the drivers overlap.

As part of the factory calibration process, every speaker is individually fine-tuned using DSP to iron out the tolerance variations that even the best drivers suffer from. This allows precise matching of the speakers for use in stereo or surround systems, and is done after the drivers have been mounted in the cabinet by connecting the monitor's rear-panel data 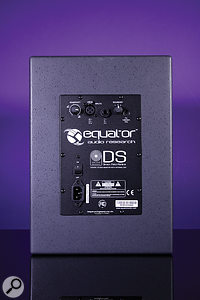 The rear panel houses the D8's input connectors, as well as a stepped level control and a three-way boundary voicing switch. port to the factory calibration system and then loading in data that is individual to each speaker.

While a perfectly flat frequency response might seem the ideal for a monitor, the Equator design team enlisted a panel of 'golden ears' from the recording industry, including mastering engineers, and made subtle voicing adjustments to the speakers based on their input. Tweaks that all panel members seemed to agree on included pulling down the 150Hz region very slightly to allow the midrange to come into better focus — but according to Equator, we're only talking about adjustments of fractions of a dB in most areas.

So, that's the Equator design approach, but how do they actually sound in a real-world environment? Well, in my studio they sounded extremely transparent and well focussed, with very clear mids and detailed highs. There was also a sensible amount of bass extension given their physical size, with no obvious bass 'flab' caused by over-zealous port tuning. More importantly, they showed up the shortcomings in some older recordings such as digitally remastered versions of analogue tapes that were clearly past their best at the time of transfer. For example, some of the Jimi Hendrix material I have on CD sounded just a touch grainy, whereas more up-to-date recordings of known good quality, such as John Mayer, sounded smooth and three-dimensional with vocals you could almost reach out and touch. The stereo imaging was particularly good, as you'd expect from a properly-designed dual-concentric speaker, enabling the listener to hear into and around the mix and making it easy to pick out vocal treatments and to separate instruments. There was no sign of strain at higher playback levels either, at least not until you get to a level that is uncomfortable to work with.

Although this level of quality usually comes at a premium price, in this instance the Equator D8s actually fall closer to the mid-price bracket rather than to the esoteric end of the price spectrum. When I initially checked the price, I thought I was being given the cost per speaker rather than per pair, so I was pleasantly surprised when I discovered that the cost was indeed for a pair.

Most project studio owners tend to look in the sub-£800 bracket for their monitors, which pits these against brands such as Mackie, Adam, Event and Eve, with models of a similar size from the likes of PMC, Focal, Quested and Sennheiser costing more. There's a lot of subjectivity when it comes to choosing speakers, all of which have advocates and detractors, but this is the first time I've fired up a pair of Equators in my own studio and I found them to be immediately comfortable to work with. The bottom line is that, with these speakers, good mixes sound good and bad mixes sound bad, while their almost forensic sense of clarity and focus lets you critique the various mix elements with confidence. I'll be genuinely sorry to see them go.

Although the Equator range competes on price with a number of traditional two-way monitors from companies such as Adam, Genelec, Eve, Event and Mackie, they stand comparison with some speakers costing significantly more.

A lot of work has gone into the design of these speakers, and the 'golden ear' listening panels have clearly paid dividends. They compete well on both price and quality in the nearfield monitor middle ground.

$777 per pair including delivery.