In the D5, Equator have employed the same innovative technology they use in their premium models — but at a remarkably low price. 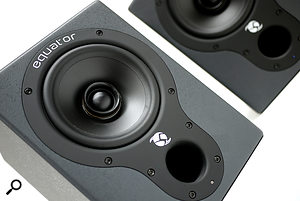 The name Equator Audio may not be instantly recognisable in the UK, but company founder Ted Keffalo has a significant track record in the industry. In 1995 he co-founded Event Electronics, whose 20/20 range of monitors made quite a splash in the market. Following the sale of Event in 2006, Ted then started up Equator Audio Research and set about developing a new line of active studio monitors. His long experience in monitor design had given Ted some important insights that were to inform the development work of Equator. Possibly the most significant realisation was that no two transducers could be manufactured with identical output characteristics, and that the resulting differences between the frequency responses of any two given units would inevitably lead to frequency-dependent left/right shifts in stereo image.

In order to overcome these differences, Equator began developing a proprietary DSP controller, which is able not only to create precise crossover topologies for each loudspeaker and electronic alignment of the drivers, but also to provide sophisticated parametric equalisation, filtering and time-alignment. This level of DSP control enabled more accurate and speedier voicing of the loudspeaker by electronically tailoring its response to achieve the desired audio performance. It also ensured that every loudspeaker manufactured could be set up to precisely match a reference voicing.

The conventional mounting of the high-frequency tweeter above the bass woofer can cause phase-distortion issues in the critical mid-range, especially around the crossover point, where both transducers are reproducing some of the same frequencies. To combat this, Ted revived the old coaxial-driver idea, where the tweeter is positioned inside the woofer. This means that the loudspeaker more closely approximates a point source, so the sound waves coming from the tweeter and woofer are more closely time- and phase-aligned. This typically results not only in a more stable and detailed stereo image, but also in a wider sweet spot at the listening position.

More detail on the nuts and bolts of Equator Audio's approach can be found in a white paper on the company's web site.

The first tangible results of all this R&D were the high-end Q Series of active monitors. You can read our 2009 review of these premium speakers at /sos/oct09/articles/equatorq8.htm. For we less financially-endowed mortals, Equator have now developed a new, more cost-effective implementation of the same technology in the active D5.

The coaxial 5.25-inch polypropylene driver that dominates the front baffle of the diminutive D5 carries a one-inch, silk-domed tweeter at its centre. A raised surround frames both the driver and the 1.75-inch reflex port, in a look reminiscent of that of a conventional two-way loudspeaker. The back panel carries a sensitivity control with a range from +12dBu to -10dBu, inputs on XLR and TRS quarter-inch jack (no combi connectors here) and a three-position Boundary selector switch which allows the bass response to be tailored to corner, wall and free-standing positions. In my case, positioning the D5s in the direct/nearfield position that they are designed to occupy meant that they were in free space. There's also a connector marked 'For Calibration Only' which is used at the factory to match every D5 to within 0.2dB of the reference performance.

The twin 50W (peak) amplifiers in the D5 are driven by a fourth-order (24dB/octave) digital crossover, and the system is capable of producing 103dB SPL. The D5's frequency response curve is quoted as having its -3dB points at 53Hz and 20kHz. The DSP, as well as providing crossover compensation and driver correction, also incorporates limiting and driver protection. 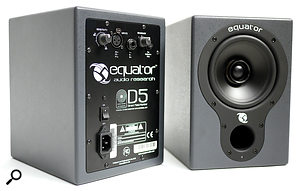 The back panel houses the audio inputs, an input sensitivity knob, and a three-way Boundary switch that optimises the speaker's performance for half-space, quarter-space or free-standing operation.

Like most loudspeakers, the D5s need to be run in for a while, and it took about 12 hours of continuous playback for the sound to open up and settle sufficiently to allow serious listening to begin. My first impressions were of a well-behaved loudspeaker with a slightly forward character to its mid-range. The treble and bass appeared smooth and controlled, without any noticeable peaks or troughs in the response, and the D5 delivered a high degree of detail at both ends of the spectrum. The silk tweeter gives the D5 a different character from other dual-concentric speakers that I've used in the past, and this doubtless contributes to the smooth nature of its high-frequency reproduction.

Although the D5 doesn't have the extra octave or so in the low-end that can really fill out the bass in a track, it does reproduce a lot of detail and shows enough down there to give you confidence that what you're hearing will translate well onto bigger monitors. I spent a lot of time switching between my main monitors and the D5s, and I'd be happy and confident mixing the bass end of my tracks on either.

However, the mid-range is where the D5 is designed to excel, and that's where it really caught my attention. I now think that my initial perception of a mid-forward sound was possibly more the result of its stability and detail in the mid-range, coupled with the still-maturing bass and treble drivers. The control of the DSP over the mid-range is evident, but not audible: in other words, you can hear the result but you can't hear the engine at work. There is a very high level of mid-range detail, and equally impressive is the way that the precisely delineated stereo image produced by these little monitors is held rigidly in place. These two factors combine to enable you to really drill down to discover low-level detail across your mix.

Overall, I found that the D5 was more than capable of matching the tonal spectrum of my main monitors — except, as mentioned earlier, in the really low bass. Switching between the two sets of loudspeakers didn't leave me feeling that anything was changing to any great extent, and gave me confidence that sounds engineered on the D5 would translate virtually intact onto the bigger monitors.

My overall impression of the Equator Audio D5 was that of sounds being scanned by searchlight rather than that of music being illuminated. There are times during the recording and mixing process when a high level of forensic precision is exactly what is needed, and there are other times when I like to relax and enjoy the soundscape. With the D5s, I didn't always sense the full extent of space and depth that I might have expected: switching between the D5s and my main monitors revealed that the D5s were slightly pulling in the width and depth of the stereo image. However, given the fact that my monitors are almost six times the price of a D5 pair, a slightly constricted stereo image isn't exactly a major issue.

There was a certain near-legendary loudspeaker from 1978 or so that was characterised by a stark and somewhat brutal honesty, and the performance of D5 tends towards that general direction. However, the D5 is more sonic stiletto than the legendary rapier and, with these speakers, I certainly didn't feel the need to reach for some tissue paper to tame the high frequencies!

It's been a long time since I've listened to a loudspeaker at this price that has impressed me this much. The precise, uncoloured reproduction is impressive enough, but it was the D5s' mid-range clarity and detail — especially in the area around the crossover point — that really grabbed me. The DSP process, which works, according to Equator's white paper, by taking out anomalous peaks in a given unit's frequency response and then filling any troughs therein (as well as taking care of time- and phase-alignment and other bits and pieces) has no detectable deleterious effects on the programme material and is, I have no doubt, the major reason that the D5s work so well.

Given its affordability and level of absolute performance, the Equator D5 is a quite remarkable loudspeaker that will doubtless find its way into a very large number of home and project studios. The 21st Century's very own NS10 might just have arrived.

There's a large selection of possible alternatives available — except that none of them feature coaxial drivers. However, at around the D5s' price you could consider such well-regarded two-way monitors as the KRK RP6 Rokit G2, M-Audio's BX8 D2, the Adam F5, Mackie's MR5 MkII and Tannoy's Reveal 601A.

The Equator D5 is a remarkable combination of a classic design topology with cutting-edge DSP control, which produces closely matched monitor loudspeakers with a level of performance that belies their modest price. The NS10 may finally have met its match.