How often have you rigged a mic to find it doesn't appear to be working? In such circumstances fault-finding is made far easier if you have a reliable and continuous sound generator. Flatkeys Ltd, a small independent British manufacturer, have been making a couple of useful and very affordable little sound generators for about four years, built into XLR plugs. The phantom-powered P!NG (with a purple collar) is a pink-noise generator, while the S!NG (with an orange collar) is a sine-wave generator. Both devices have simple keyring attachments to stop them getting lost, and ship in simple plastic wallets with fold-out instruction sheets. 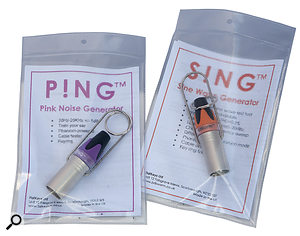 The P!NG is the simpler of the two models, generating constant pink noise at a level of around -55dBu RMS, which is a nominal microphone-level signal (although, strangely, the accompanying notes don't mention the output level at all!). When the P!NG XLR is plugged into a mic cable or mixer channel input with phantom power present, a bright red LED in the XLR's cable outlet illuminates, and noise is generated at the reference level after about two seconds. That's all there is to it — plug it in, trace the problem, set the gain. It has additional uses, though, because its pink-noise source produces equal energy in each octave (or 1/3 octave) band. This makes it a very handy tool when equalising PA systems, for example — you just adjust the system graphic EQ for the most even tonality — and it's also useful in helping to 'train' one's hearing, such as learning to recognise what a channel equaliser's controls actually do. Pink noise is also much easier on the ears than constant tone!

The S!NG is a much more elaborate tool, and could be described either as 'overly complicated' or 'unusually versatile', depending on your viewpoint! I tend towards the former view, since there are nine main operating modes, each with between four and 13 sub-modes! Yet, despite this astonishing flexibility, the audio output is fixed at a nominal -20dBu for all modes, which came as a bit of a shock after aligning a channel with the P!NG's -55dBu noise!

Operating modes and sub-modes are selected by turning the phantom power off and on at specific points in the S!NG's power-up sequence, which is both clever and frustrating at the same time. When the unit is first connected to phantom power the S!NG emits a high-pitched beep followed by a lower-pitched quasi-Morse code sequence of long and short pulses, during which the LED flashes green. These Morse sequences provide the relevant main mode number, with a short pulse counting as 'one' and a long pulse as 'five'. So a long and two shorts mean mode seven — which is great if you have the instruction sheet to hand to identify the different mode numbers, and no help at all if you don't!

However, you can't relax, because this main mode sequence is followed immediately by another high-pitched beep/Morse section to define the current sub-mode (the LED flashes red during this phase). Finally, another high-pitched beep signifies the end of the mode dialogue, and the selected tone is then generated. By turning the phantom power off-on during the first peep/Morse sequence the main mode is incremented to the next mode, and by turning off-on during the second peep/Morse section the sub-mode option increments. You can't move backwards through the mode or sub-mode list, so if you miss your target you have to power up and down repeatedly to cycle around the list! Thankfully, the unit powers up in its last used mode, so once you've found a useful setting it will stay there.

The nine main operating modes comprise continuous sine waves (with 12 separate frequencies between 27.5Hz and 10kHz, selected via the sub-modes), pulsed sine waves (with different on-off durations and frequencies), discrete clicks (single-cycle sine waves at different frequencies for system time alignment), swept sine waves and chirps (spanning different frequency ranges and speeds), a heartbeat effect (intended for checking driver polarity), and a random note generator. These options are certainly comprehensive and, as if that wasn't enough, most modes are available in both standard differential output and common-mode electrical formats too — the latter for checking common-mode rejection and balanced and unbalanced input connections.

Obviously, the P!NG is a very versatile and powerful tool and it comes at a remarkably low price. On that basis alone it's well worth acquiring for the tool box. As a basic test-tone generator the S!NG is a great little tool, although changing the mode, while simple enough in principle, can be fiddly and frustrating, especially if you don't use it very often.

My only negative comment from a quality perspective is that the sweep modes revealed some low-level beat-frequency (aliasing) artifacts, related to the microcontroller, but this is unlikely to be an issue for most applications. The fixed -20dBu output level is a bit restrictive, being uncomfortably high for mic inputs and too low for line inputs, and the high 1kΩ output impedance means the level varies depending on destination input impedance.

Overall, I can't help but wonder if a greatly simplified version of S!NG might actually make a better and more usable product, and Chris Burrell the Flatkeys designer tells me he can program custom versions with fewer, selected features, as well as reduce the output to mic level, if required. Nevertheless, the standard model will certainly find a home in my box of problem-solvers. The P!NG and S!NG are both highly recommended for anyone working with PA equipment or who might need a reliable sound source when fault-finding PA or recording rigs.