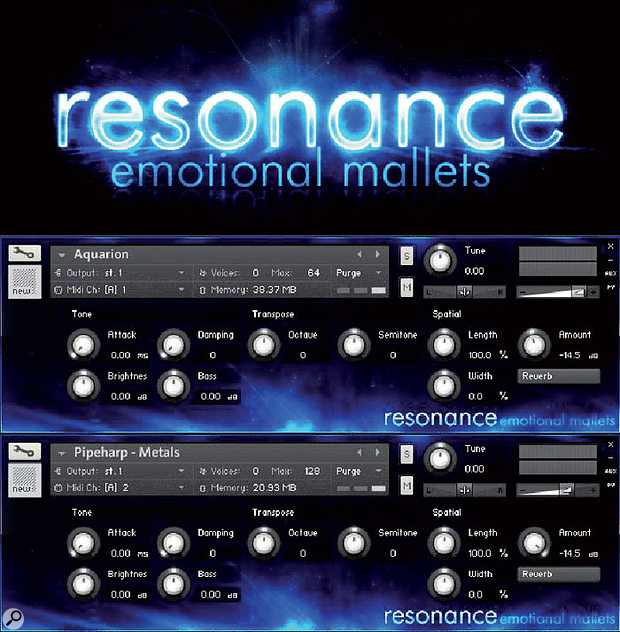 Sometimes you need classic instrumental sounds, but sometimes you yearn for new ones that haven't been heard before. Resonance: Emotional Mallets from Impact Soundworks most definitely falls into the latter category. This collection started life as 14 unique instruments constructed from materials including glass, metal, stone and wood. Many were commissioned from custom maker Jim Doble of Elemental Percussion, who has spent the last 18 years creating a host of new percussion instruments now found in schools, museums and private collections around the world.

The instruments typically span a couple of octaves, have been played in various ways with soft rubber and hard metal mallets and a violin bow, and have been persuaded to emit various special effects by other violent means. The 33 virtual instruments (and a further 49 designed ones, of which more on these later) generally feature three or four velocity layers for lots of expression, plus extended key mappings that span anything from four to six octaves for exploring plenty of more extreme timbres. The 2.3GB of sampled data has been beautifully captured by close-miking with just "a touch of room air”.

The Aquarion is, in essence, a xylophone with glass keys, and I loved the intimate tautness of its sound, while the Boltophone (made from solid metal bolts, and originally tuned to a pentatonic scale) has a harder attack but can also sound surprisingly clear and smooth when bowed. I'm still wondering how the Wrenchophone instrument was tuned so well (since, as its name implies, it started life as a set of wrenches), but its dark tones are very pleasing. The Stonaphone, which has keys made from roofing slate is, as you might expect, warm and earthy, with a much shorter decay. My favourite is the complex 'Gamelan Ensemble', which features unison performances of Boltophone, Wrenchophone, Stonaphone and Pipeharp.

Impact Soundworks didn't stop with the natural sounds of this instrument collection. Comprehensive scripted interfaces let you modify various aspects of each sound and add carefully chosen convolution reverb. Impact have also used their sample base to design a further 49 new virtual instruments using software processing. These include some truly atmospheric impacts and keyboards, inventive leads and basses, epic percussion and evocative textures and drones. If you're looking for fresh and unusual instrumental inspiration, you should definitely put Resonance from Impact Soundworks on your shopping list.