Given the blatant Roland flavouring of the other modules in the Erica Synths Techno System, it was something of a relief to find the Bassline was not a TB‑303 clone: its acidic pedigree is very much its own. The filter design is borrowed from the Erica Acidbox and the oscillator is based on the modern equivalent of the Curtis 3340 chip. 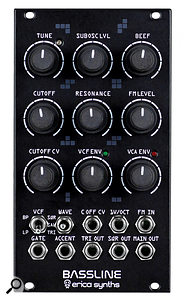 Erica Bassline. Size: 14HP. Current: +12V = 110mA, -12V = 70mA.The module features a pair of decay-type envelopes, for the VCF and VCA respectively. Cutoff frequency modulation is set by a single pot and this serves both the decay amount and that of any external voltage source you plumb in. If you set the VCA decay to maximum, it slips into drone mode.

At first, I struggled to obtain perfect pitch tracking over more than a couple of octaves, until Erica Synths talked me through the simple calibration routine (involving the front‑panel trimmer). The act of fine tuning using the single Tune knob requires a delicate touch though. It's wide-ranging and ideal for special effect-type sweeps, but best avoided during important bass lines! Joining the 1V/oct input is a pitch modulation input, complete with a dedicated pot.

A small and not-particularly-accessible switch routes the VCO's square, sawtooth or triangle waveform through the filter. Direct outputs for the square and triangle are available too, which raises the possibility of a spot of filter FM. While this is certainly possible, it's hampered by having that single cutoff CV amount and its link to the filter envelope decay.

The filter is a decent all-rounder, offering low-pass and band-pass modes, each with a bright, fizzy resonance. At the highest levels of resonance, noise creeps in, but it's a pleasant, bubbling 'zing' that's quite distinctive. The low-pass mode has a solid bass end and in either mode, if accent is used, it drives the filter cutoff as well as the level.

Lending a further boost to the bottom end, the square‑wave sub oscillator has an unusual implementation: it doesn't simply fade in. Instead, a low‑pass filter opens as the level increases. The effect is rather subtle and only really obvious in the final few degrees of travel but it's a nice touch. Further thickening and filling‑out duties are obtained from the built-in detune function. This employs a pair of analogue delays (Bucket Brigade Devices) accessed from a single knob. When used sparingly, Detune provides swimming chorus-like textures, leading to audible noise from the delay lines as the depth increases. At the extremes, this parameter generates warbling madness as the hidden LFO adds progressively deeper, faster modulation.

As a partner to the Erica drum modules, the Bassline module is a neat, self-enclosed synth voice with its own character and a few worthwhile extras. If you don't mind the limitations, it could add a fresh acidic layer to any system.