Eventide have finally landed in the sweet‑smelling meadows of Euroland with the Euro DDL, the beating heart of an Eventide digital delay in Eurorack format. Many thought they wouldn't make it, but here they are. Welcome, welcome. 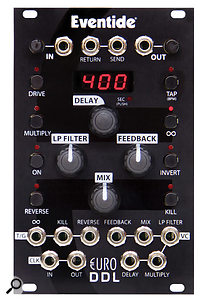 Eventide  Euro DDL. Size: 16HP. Current: +12V 200mA, -12V 100mA.Euro DDL is a mono delay line with an analogue low‑pass filter packaged in a 16hp module. On the face of it not that exciting, but of course there's more to it. This is Eventide after all. For a start, nearly every parameter has some form of CV control, whether it be a trigger to toggle reverse, kill or infinite modes, or a CV input for control over delay time, feedback, mix, the filter or Multiply (more on that later).

Despite its digital core the rest of the module is all analogue. The input drive circuit and low-pass filter help to warm up the digital core. Normal operation is at 192kHz, 24bit, and the maximum delay time is 10 seconds. By using the Multiply function, you can extend that delay time by up to a factor of 16, giving you a lavish 160 seconds. This is achieved by reducing the sample rate down to as low as 12kHz. An audible lo-fi crunch results but it's not unpleasant and can be tamed using the filter. Thanks to the capacious delay times, the Euro DDL is equally happy handling short modulation effects like comb filtering, flanging and chorusing as it is looping long audio recordings. Eventide are clearly aiming for a utility delay module that can cover many bases.

Patching a signal through the delay starts with setting the input and output levels on two mini trim pots, useful for either backing off hot modular audio levels or boosting to take advantage of the analogue saturation. To further rough up your audio, there's a 20dB Drive button, which can easily end in distortion (the good kind).

The main delay time is set using either the Delay pot, the Tap button or the clock input. The delay time is shown on the three‑digit LCD screen either in milliseconds or seconds. When using the Tap tempo button, bpm will be displayed instead. Holding down the Tap button and adjusting the Delay pot will allow you to set a tempo divider from 16th‑triplets to four bars. It's disappointing to find that there is no control voltage input for the tempo division. There is a clock input that sets the delay time but the tempo divider doesn't work at all when a clock is being received. This is a somewhat baffling omission and precludes a whole bunch of fun which could be had controlling tempo sync'ed delay times via sequencers, LFOs, etc.

The Multiply button engages the aforementioned sample-rate reduction in order to achieve longer delay times. Holding the button allows you to set a different Multiply value from x2 to x16. Changing the multiplier causes immediate pitch changes in whatever is in the delay buffer, perfect for creating lo-fi textures and drones. Unlike the tempo division, the Multiply value can be controlled via CV so there's much experimental fun to be had there.

The Reverse and Infinite Repeat buttons also add interest, whether triggered manually or via their respective trigger inputs (which helpfully can be set up as either gate or trigger inputs, changing them from momentary switches to toggles respectively). Reverse simply reverses the delay buffer and Infinite Repeat is great for looping duties, allowing the delay buffer to loop indefinitely — ideal not just for longer loops, but also for glitchy mayhem with shorter delay times. A Feedback Invert button inverts the polarity of the delay signal, which is also handy when using short delays for modulation effects like comb filtering and flanging.

The low-pass filter is fairly simple. There is no resonance, but it sounds good and there's not much more to say about it. One could lament the lack of other filter modes, but the inclusion of a send and return feed means that you can patch any other module (or indeed your entire modular) into the feedback path. So if you like a band-pass resonant feedback filter, or a chorused delay, or pitch-shifting, or all three... well, you get the idea. This is modular, after all. The low-pass filter is really just there to give a basic tone to your delay signal — everything else is up to you.

Euro DDL excels at many things. I really enjoyed the comb filtering, phasing and flanging effects that are capable with short delay times. The polarity inversion option is rarely seen on Eurorack delays and really opens up the palette for modulation effects. Equally, recording, looping and reversing long modular jams was a ton of fun. That said, it is worth being aware of what it can't do. If you're looking for stereo delays or automation of tempo sync'ed delay divisions, you will need to look elsewhere.

It could be argued that Eventide played it safe with their first Eurorack module. The Euro DDL is a reworked DDL-500, a 500 series module they released back in 2015 (reviewed in SOS April 2015 by Bob Thomas). The Euro DDL improves on the 500 in many ways, but it also shows evidence of its non-modular heritage. Nevertheless, the Euro DDL is highly capable, well built and can be used in a huge range of different ways. It does genuinely feel like the heart of an Eventide effect, where you get to decide what is attached to the main arteries. It's a solid opening number from Eventide and it has certainly whetted my appetite for more episodes of Eventide's Adventures In Euroland.