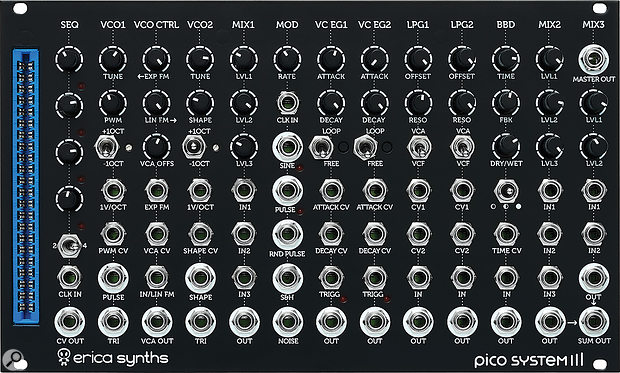 The Erica Synths Pico System, and in fact the whole Pico range of modules, represents good value for money in a small package. It's clearly been enough of a success that Erica Synths have released a third iteration, which follows a similar format to the previous two: a selection of Erica Synths' range of Pico modules is collected together and sold as a system, perfect for beginners or anyone wanting a lot of functionality in a small space.

Thirteen Pico modules are included in the 42HP mega-module. The Pico System II actually included one more module, but in the Pico III that has been replaced by a blue connector slot on the left, into which you can slot 'voice-cards'. The other major change is that the Pico System III is no longer made up of individual modules which can be swapped out. Instead there is a single large panel, effectively making it one big 42HP module. It is available as either a Eurorack module or a stand-alone desktop unit.

The focus of the Pico System III is West Coast-style analogue synthesis. There are two oscillators, two low-pass gates, two loopable envelopes, a modulator (LFO), three mixers, a sequencer and a bucket brigade delay. There are no fewer than 31 knobs and 52 modular inputs and outputs to play with, plus a handful of switches and LEDs. In the box, along with the usual power cable and screws, is one splitter patch cable (I would recommend investing in a set of stackable cables as well), five factory preset and five DIY voice-cards. If you decide on the desktop unit instead, you'll also receive 20 patch cables to get you started.

One of the voice cards for the Pico System III.

The voice-cards are a way to automatically patch the system. When you slot in a card, connections are made between inputs and outputs. They don't change the position of the knobs or switches however, so some manual setup is still needed in order to fully recall a specific sound. The DIY cards are full of empty through-hole solder connections which you can use to make your own voice-cards. The layout of the through-hole panel is consistent with the front panel inputs and outputs, so you can simply solder a wire across holes in order to make a connection. It won't appeal to everyone, but there is potential for hacking here. One could add passive attenuators or lag processors to a card with a minimum of knowledge.

I would have no hesitation in recommending the Pico System III to anyone considering embarking on a modular journey.

On to the synth itself. The two oscillators each offer a triangle and one more complex waveform, a pulse wave with PWM on one and on the other a variable waveform which moves from triangle, to square, to variable pulse. Both oscillators have 1V/Oct inputs as well as manual tuning control and a three-way octave switch. Oscillator 1 has exponential FM and Oscillator 2 has linear FM. The VCO CTRL section sandwiched in-between the two VCOs takes care of the frequency modulating, as well as providing a VCA intended to control FM levels, but which can also be used as a general VCA for other signals.

For filtering, the Pico System provides two low-pass gates (LPGs), which are essentially a low-pass filter and a VCA combined. In fact, you can switch between two modes, VCA and LPG. The only real difference is that the VCA mode is cleaner, whereas the LPG mode is noticeably filtering the signal at the same time. In LPG mode at full resonance, these will self-oscillate so you can use them as a further sound source. For each filter, two CV inputs are provided.

For modulation, we have four separate sources. A sequencer, an LFO and two envelopes. The sequencer takes a clock input and provides a CV sequence of between two and four steps. It can be clocked at audio rates so you can use it as yet another sound source: a wave-shaping oscillator. The LFO is quite versatile. Again it can take a clock input, and there are outputs for sine wave, pulse, random pulse (useful for clocked semi-random triggering), sample and hold, and noise outputs. The two envelopes are identical and offer attack and decay controls (both with CV inputs) and a loop mode, so they can double up as LFOs.

The only effect is a BBD delay, which provides manual controls for delay time, feedback and mix. It's a 4092 stage BBD which can achieve delay times short enough for flanging and comb-like effects and long enough for traditional analogue delay effects. The delay time CV input is added to the manual delay time, which means you can push the delay times further into BBD decimated chaos. A three-position switch adjusts an internal filter which darkens the delay tail to varying degrees.

To blend all this goodness together we have three mixers. Mix1 and Mix2 are the same, with three inputs, three level controls and an output. Mix3 is designed to be your final mixer and output to the rest of the world. It has two inputs and also mixes in the output of Mix2. Three mixers with a total of eight inputs might seem like overkill at first, but bear in mind that none of the modulation sources have output attenuators on board, so the output is always at maximum. Using a mixer to attenuate a signal can save precious VCAs.

The Pico System III, as a whole, packs about as much into a small space as it is comfortably possible to do. During my time with it I was able coax everything from classic bass and lead sounds, epic drones, microtonal sequences, FM west-coast plucks and more. All great fun. I'm on the fence about the addition of the voice-cards. They're a great idea in theory, but they don't represent a full patch. You still have to put all the knobs in the right positions before the patch will sound as it should. Patch sheets for the included voice-cards, plus blanks, can be found in the manual, but that does beg the question: if you have to fill out a patch sheet, and manually move knobs and switches to the correct positions, then why not just add a few patch cables whilst you're there? Another reason to stick to patch cables is that it's much easier to see what's connected to what.

When comparing the Pico System III to its predecessor, there is a clear shift towards a more classic analogue, almost West Coast synthesis. The Pico II was more of an all-round collection of Pico modules, with a mix of digital and analogue oscillators, a digital effects unit and even a couple of drum modules. The Pico III feels much more focussed, a fully formed modular analogue synthesizer. The price is also considerably lower (around half!). I presume that is mainly because of the change to a single front panel instead of the proper removable modules found in the Pico II. It means you're stuck with the system as it is, but given the dramatic price difference, it's an understandable compromise.

I would have no hesitation in recommending the Pico System III to anyone considering embarking on a modular journey. It will make an excellent gateway into the world of analogue modular. The value for money is incredible. When you divide the cost by the effective number of modules you receive, it works out around $30 per module. If you enjoy a bit of DIY tinkering, the voice-cards may make it a unique proposition too. Overall, it's another miniature winner from Erica Synths.