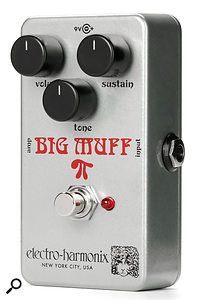 There have been several versions and revisions of the 1970s Electro-Harmonix (EHX) Big Muff. Originally they were based on discrete circuitry, but some later models switched to integrated circiuits. Each version has its own character, but the 1973 version two Big Muff Pi — with a ram's head printed on the casework — was used on so many classic records that EHX have decided to bring it back. This reissue combines the original discrete transistor with surface-mount resistors, the latter being used to save space.

To my ears, this version of the Big Muff Pi, which has a similar circuit to the Green Russian pedal, sits somewhere between classic fuzz and distortion, exhibiting wondrous sustain while retaining good note separation. Its circuit is relatively simple: based on four silicon transistors, the first is an impedance matcher and gain stage, and that's followed by two identical clipping stages in series that use diodes around the transistor to create the necessary clipping. The fourth transistor handles tone-control duties as well as buffering the output. It doesn't 'clean up' quite as elegantly as a less aggressive drive pedal when you back off the guitar volume, but it still does so to a useful extent. However, clean and subtle is not what this pedal is about! It does that searing '70s solo thing, that can be heard on records from U2, Pink Floyd, the White Stripes, the Black Keys and many more, so beautifully. It has also been used on bass guitar on several records, of course.

I've tried various other iterations of the Big Muff, but to date this has to be my favourite.

There are just three controls, one for Sustain, one for Volume and one for Tone. Tone covers a very wide range, going from thick and creamy at one extreme to quite abrasive at the other. Power can come from a 9V PSU or battery, and to better meet the needs of modern players, the pedal not only has a much smaller footprint than the original, but also has a status LED to show when the effect is active. The true bypass of the original has been retained. I've tried various other iterations of the Big Muff, but to date this has to be my favourite. I still don't know whether to call it a polite fuzz or a rude distortion, as it shares characteristics with both, but it sounds exactly as it should. It costs a lot less than most boutique pedals and nails that classic sound by being the real thing, not an emulation or clone.