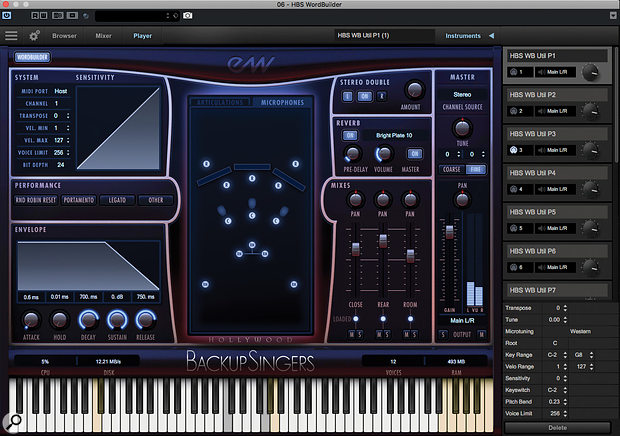 If you crave the sound of super-slick backing singers, is EastWest's Hollywood Backup Singers a viable alternative to paying regular session fees?

While nothing can really replace hiring a well-seasoned session singer or three, for those on a deadline or a budget, EastWest's latest release could be just the thing. EastWest have a great track record in vocal sample libraries and SOS have reviewed their Voices Of Opera, Voices Of Soul, Voices Of The Empire and Hollywood Choirs titles over the last year or so. So, can HBS provide you with the polished sound of a trio of female pop/soul singers straight out of the box? Let's start the audition...

HBS features a core combination of both vowel-based patches and a collection of phrase-based presets. However, like Hollywood Choirs, HBS also includes the latest iteration of EastWest's WordBuilder (WB) technology. This allows you to enter words and word phrases and, with the WB engine doing some clever sample manipulation of vowel and consonant sounds, HBS can then sing that phrase at your command.

Given the 'Hollywood' tag it's no surprise that HBS is striving for a highly polished backing vocal sound. The source material is undoubtedly up to the task as the three singers involved are Durga and Lorelei McBroom (touring veterans with Pink Floyd) and CC White (credits with Jason Mraz, Lenny Kravitz, Al Green and Crosby, Stills & Nash). All the recording was done in EastWest's own Studio 3, a space that has been used for some of the most iconic recordings ever made, including the Beach Boy's Pet Sounds. This is a vocal library built from top-end resources. 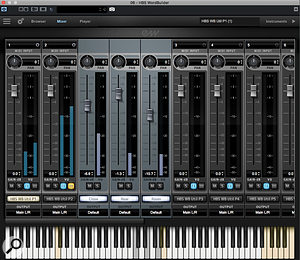 Play 6 provides a comprehensive set of mixing options.In total, the HBS runs to nearly 11GB of sample content and is presented through EastWest's Play 6 front-end. This can run both stand-alone and as a 64-bit VST, AU or AAX plug-in within your DAW of choice. Alongside Play's usual Browser and Mixer functionality, the Player tab is customised for the specific features of HBS. Virtual keyboard aside, the rest of the Player tab is split into a number of sections that allow you to configure performance and playback settings for the currently selected patch including the MIDI velocity response curve, the AHDSR amplitude envelope, reverb and Master mixer channel.

The central panel, which itself has two tabs, provides a means of toggling on/off specific articulations or, in the Microphone tab, toggling on/off playback from the three different microphone arrays — Close, Room and Rear — used in the original recording/sampling process. These give you plenty of control over the ambience of your vocals and you can unload samples from a specific array if you wish to reduce the load on your host. 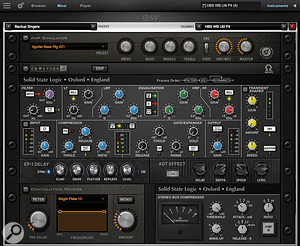 The effects section includes an impressive SSL channel strip emulation.The Mixer tab provides a fairly conventional virtual mixing environment with separate channels for each patch currently loaded. In addition, there is a full effects section based upon a modelled SSL channel strip. The Browser tab provides access to HBS's preset patches. Across the three broad categories mentioned earlier, these are divided into six folders and include 87 vocal 'instruments', nearly 600 solo ad lib-style phrases and over 220 ready-to-go WordBuilder phrases.

HBS includes a comprehensive range of both single and dual-vowel presets, with both mod wheel and velocity options to move and/or crossfade between different levels of dynamics or vowel type. Very usefully, you get 'regular' vowel sounds, and more 'expressive' options, with the latter also coming in sustained varieties. There are also some patches where an additional sample layer recorded through a Leslie speaker is available and you can balance this with the three main microphone arrays within the Mixer.

It's not just vowels, though; there are also patches for both pitched and unpitched consonant sounds. These can provide variations to the vowel sounds and some have a useful percussive quality.

MIDI CC1 (Expression) can also be used to control volume (via a suitable knob, slider or footpedal) to add additional realism to a performance. Combined with the obvious quality of the sampling, this more conventional section of HBS is capable of creating some highly polished backing vocal performances with a minimum of effort. For both the vowel and consonant options, as well as the individual presets, there are also keyswitched presets, so you have the option of working either way.

While the vowel/consonant patches feature all three singers performing together (so you get three voices singing for each MIDI note triggered), HBS also includes a sizeable collection of ad lib-style vocals performed solo by each singer. These are organised into 12 root note-based presets, with each preset containing a collection of performances mapped across a MIDI key range. For extra flexibility, the mod wheel can be used to switch between triggering the whole phrase (low mod wheel settings) or just the final sub-section of the phrase (higher mod wheel settings).

Overall, these solo phrases are an excellent source of additional vocal colour and, if you imagine the (mainly) non-lyrical vocal improvisations that often appear in pop, R&B, soul, gospel, hip-hop and dance genres, then you will have a pretty good idea of what to expect. Incidentally, having rendered a few phrases to audio within Cubase, I had quite a lot of fun reworking the melodic content using pitch-correction tools. There is a lot of mileage to be had with the phrase presets if you are prepared to do a little additional hands-on work.

Conversely, if you find that more is more, HBS allows you to track up the singers, for example playing 10 keys gives you 30 singers and effectively a gospel choir.

Excellent though the vowel/consonant and solo phrase sections of HBS are, the ability to sing lyrics of your choice is undoubtedly the headline feature of HBS. In reviewing EastWest's Hollywood Choirs in the June 2018 issue of SOS, Nick Magnus went into some detail on the WordBuilder engine. While EastWest have undoubtedly continued to develop the technology since then, the underlying principles and mode of operation are similar here. A single WB multi-preset — formed from 14 individual presets — supplies a range of vowel and consonant sounds. These are then combined via some very clever scripting to articulate the words within your phrase. 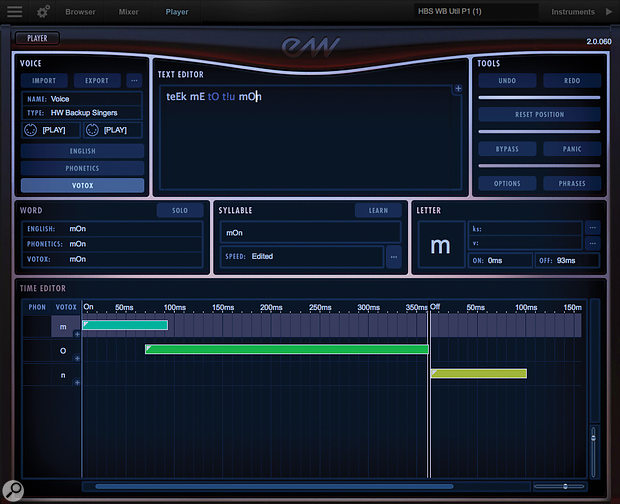 When using the WB preset, an additional button appears top-left of the Player tab to open the WB control set. From here, you can access the preset phrases (split into Gospel, Pop and Soul groups), type in your own phrase and, if required, make detailed edits to the phrase performance. There is plenty of user control here and, while the UI has been implemented very well, getting to grips with how the WB process functions and these editing options is undoubtedly key to getting the best out of this feature. It most certainly does reward the effort though; the results can be remarkable.

There are perhaps two areas that bring the most obvious rewards; finessing the phonetic elements to best articulate the words within the phrase and controlling the timing of each word to ensure a natural result. For the first of these, while you can enter a phrase in English, the sooner you get to grips with the phonetic or Votox (EastWest's own means of defining syllable sounds) formats, the sooner you will be able to maximise the pronunciation achieved. Yes, Votox can seem a little cryptic at first, but a little practice goes a long way.

Hollywood Backup Singers is a quality product and capable of great results.

On this front, there are some useful tips and tricks in the PDF manual that are also worth following. A simple adjustment — but one I found particularly useful in terms of adjusting the intelligibility of sung words — is to globally reduce the relative level of vowel sounds. This gives a little extra emphasis to the pitched and unpitched consonants. However, if you need more control, WB allows you to specify the relative levels — and transition styles between — each letter of each syllable. With a little persistence, even the most difficult words and phrases can be coaxed out of the WB engine.

The other element of getting realistic results is timing, both of the phrase as a whole, but also how individual words are performed. The former is, in part, controlled by how you trigger the start and end of each syllable or word via the MIDI notes you play. With any phrase, a little experimentation will soon let you refine your performance. However, you may well need to delve into the WB Time Editor display to adjust the relative length of each sound element, their degree of overlap, and their relative volume.

Editing within the Time Editor is not unlike that of a conventional MIDI note editor but a key concept centres around the vertical MIDI Note Off marker. In terms of timing, the last sound element that abuts this marker is generally a sustained vowel sound and will be held as long as you hold the MIDI note. However, the elements after this marker are only sounded after you release the MIDI note and WB then completes the sound of the syllable or word. It's therefore important to accommodate this as you trigger your sequence of MIDI notes and, equally, you can adjust the lengths of all these sound elements via the Time Editor to adjust the desired phrasing. Again, there can be detailed work required but it gives you very precise control.

In terms of the more conventional vowel-based presets and the solo ad lib phrases, HBS is right up there with any of the alternative sample-based 'pop' vocal libraries; it is flexible, easy to use and sounds great. However, WordBuilder is the clear highlight feature and, while this type of technology is not unique to EastWest products, it is undoubtedly well implemented here.

When Nick reviewed Hollywood Choirs, he commented that the intelligibility of individual words was not always critical in a choir context. However, in pop/soul-style backing vocals, the clarity of the words in a sung phrase is perhaps more important. I have to say that HBS does remarkably well on this front. Sometimes, that's just straight out of the box but, other times, you will need to get busy with the editing tools. At first, this might be a slow process but even a little familiarity soon brings efficiencies.

For those of us that don't have a trio of professional backing singers tucked in a corner of our studios waiting to be called (or the budget to hire them in), once mastered, HBS is a genuinely impressive software-based alternative. The price may put a one-off purchase beyond some but, for working composers/producers keen to keep their software budgets under control, access through a Composer Cloud subscription offers a sensible alternative. Either way, Hollywood Backup Singers is a quality product and capable of great results.

There are plenty of alternative sample libraries that can provide creditable pop/soul backing vocals, whether vowel-based or ad lib/phrase based. For example, EastWest's own Voices Of Soul, Zero-G's Ethera Soul Edition or BFA's Vintage Vocals might all fall into this broad area. However, very few candidates also offer the kind of DIY phrase singing provided by HBS WordBuilder.

Perhaps the most obvious 'pop vocal' comparison would be with Yamaha's Vocaloid product line and, while this attempts the even more demanding task of trying to create lead vocal parts from your typed phrases, it could also be put to use for backing vocal production.