You can get a lot of audio interface for your money these days. The latest from ESI offers 18 ins and eight outs for a very reasonable price, and could be ideal if you need to record lots of sources simultaneously.

ESI's not-too-memorably-named ESU1808 is an audio and MIDI interface that makes use of the USB 2.0 standard's rapid data-transfer rates to provide multiple channels of audio input and output. A total of 18 inputs (including two balanced XLR microphone sockets with +48V phantom power) and eight outputs are on offer, and all for an attractive price.

The 1808 is supported by Windows (XP with Service Pack 2 and Vista, 32-bit versions only) and Mac OS X (10.4.4 or later). A DVD-ROM drive is required to install the bundled Cubase LE software, and this also requires you to have an Internet connection for activation. The device drivers come on a CD-ROM and are also available from ESI's web site.

A Pentium 4 or Athlon CPU running at 1.4GHz is the minimum requirement for PCs, and a G5 or 1.5GHz Core Solo processor the minimum for Macs. In both cases, 512MB RAM and 1GB of hard disk space are also recommended. A USB 2.0 port is also required (older USB 1.1 ports will not work properly). The 1808 is a 24-bit, 96kHz device, and supports playback from audio applications via the WDM, MME, ASIO 2.0, GSIF 2.0 (Gigastudio), Core Audio and Direct Sound protocols.

The interface comes in a compact and, it has to be said, unusually stylishly designed 1U-high, 19-inch, rackmount case. The front panel boasts an attractive stripey design and scalloped rack 'ears', there's an embossed ESI logo on the top, and the case ends are pleasingly rounded. Cosmetic details like these may not count for that much in an audio interface, but it's still nice to see a manufacturer making the effort. Also showing effort is the included printed manual, which is well written, clearly illustrated and, despite apparently having been translated from German, very easy to understand.

Installation is simple. The device drivers need to be installed on your computer before the device is attached, and driver installation is the usual process of clicking 'Next' and 'OK' a few times. You're then prompted to attach and power the device, after which you should be up and running.

At one end of the front panel are two XLR mic inputs with identical controls for channels 1 and 2. A latching switch toggles +48V phantom power on or off (independently for each input) and an LED indicates when it's active. A knob controls input gain and a row of three coloured LEDs (labelled -18, -6 and 0dB) allow you to keep an eye on the level. Another button, labelled 'Pad', switches the maximum input sensitivity between its default -5dBu and +15dBu, to accommodate 'hotter' sources.

The ESU1808's Control Panel software allows you to monitor levels and perform basic routing operations.Next along, channels 3 and 4 have unbalanced 'Hi-Z' instrument inputs on standard, mono quarter-inch jacks — ideal for DI'ing electric guitars or basses. Each has its own gain knob and a single peak warning LED. Alongside these are four more quarter-inch jack sockets assigned to channels 5, 6, 7 and 8. These can accept balanced (on TRS 'Tip, Ring, Sleeve' jacks) or unbalanced inputs, although the manual notes that they are 'optimised' for unbalanced (-10dBV) signals.

On the right hand-side of the front panel, a set of three knobs and three buttons provide mix controls for monitoring. A knob labelled 'Inputs 1-8', unsurprisingly, controls the monitor level of all eight front-panel inputs. A second knob. labelled 'Inputs 9-16'. performs the same trick for the rear-panel inputs (we'll get to those in a moment). A third knob, labelled 'Outputs 1-8', controls the level of a mix of playback channels 1 to 8. The combined end result appears at the rear-panel 'Mix Out' sockets and/or the headphone socket.

Latching buttons labelled 'Mono A' and 'Mono B' can be used to create a mono mix of the signals at inputs 1 and 2 (the mic inputs) and 3 and 4 (the instrument inputs) respectively, which makes monitoring these inputs on headphones more comfortable, as it avoids mics or instruments appearing hard left or hard right in the cans.

Finally, there's the headphone output itself, a standard stereo quarter-inch jack socket with its own volume knob set alongside. A button labelled 'HP Out' allows you to choose between monitoring output channels 1 and 2 via the headphones, or the same monitor mix sent to the 'Mix Out' sockets.

The remaining space on the front panel is taken up by a row of status LEDs, which indicate whether the ESU1808 is using its internal clock or sync'ing to an external source, what the current sample rate is (44.1, 48, 88.2 or 96kHz), any MIDI I/O activity, and (somewhat redundantly) whether the unit is powered on or not.

A slightly unusual four-pin socket accepts the cable from the unit's external power supply, and uses a kind of screw-thread cap for fixing the connector securely in place. A small power switch sits beside the socket, which the manual recommends you use for powering the unit on and off, rather than just switching it off at the wall. The button's location is not all that convenient, however. Given that the ESU1808 is a rack-mount unit, and might well find itself positioned beneath several other units in a rack, a front-panel power switch would, perhaps, have been a better decision.

The ESU1808's rear panel is host to the unit's optical and MIDI connectors, eight analogue outputs, the remaining eight analogue inputs and a slightly inconveniently placed power button.Next along are a pair of standard MIDI sockets, one In and one Out — useful, although possibly a bit less than you might want for any studio with a good collection of MIDI hardware. Next to these are a pair of S/PDIF digital connectors; one In and one Out. The S/PDIF In serves as the inputs for channels 17 and 18, while the S/PDIF Out allows digital output of playback channels 1 and 2, 3 and 4, 5 and 6, or 7 and 8 (configurable via the unit's Control Panel software). A standard USB 2.0 socket is also provided for connecting the 1808 to the host computer.

The 'Mix Out' sockets, already mentioned, are next. These are quarter-inch jack sockets, and would typically be used as your main stereo monitor outputs. The software control panel, however, provides an option whereby the Mix Out sockets can be configured to work as line outputs for playback channels 7 and 8. In other words, if you want to have eight analogue output channels working simultaneously, you'll have to do without the dedicated monitor outputs.

Alongside these are the six quarter-inch output sockets for playback channels 1 to 6. These can accept balanced (on TRS jacks) or unbalanced connections, and their output level is switchable between -10dBV and +4dBu via the software control panel. A further eight quarter-inch jack sockets serve as analogue inputs for channels 9 to 16. These can accept balanced or unbalanced inputs, but are 'optimised' for balanced (+4 dBu) signals.

For Windows and Mac OS X users alike, a software control panel is provided, by means of which you can access a number of functions. There are two tabbed views —'Information' and 'Control' — the former simply showing the current firmware version. The 'Control' tab is where all the action happens and it displays a set of input level meters, divided into three groups: 'Analogue In 1-8', 'Analogue In 9-16' and 'Dig In'. A button labelled 'Mon' allows you to activate input monitoring for signals connected to the S/PDIF input. Four pairs of on-screen faders can be used to control the levels of the ESU1808's four output pairs. You can also choose which of the channel pairs is sent to the S/PDIF output, and there's a 'Mix' button that determines whether the back panel 'Mix Out' sockets output a monitor mix of all input and playback signals, or function instead as analogue outputs for channels 7 and 8.

Permanently on display to the right of the tabbed views is the 'ESU Status' section. This displays information about the device's firmware version, clock source and current sample rate, a drop-down menu allowing you to change the last. This is also where you can choose to set the 'Consumer' or 'Professional' flag for digital I/O via S/PDIF, and switch the overall analogue output level between +4dBu (balanced) and -10dBV (unbalanced). 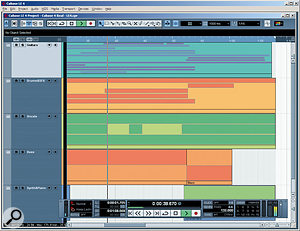 A slightly tortuous online challenge and response system is used to 'activate' the software once installed. This requires you to have both patience and an Internet connection. Once that's out of the way, the software is easy to use (a basic but helpful setup guide is included in the ESU1808's manual) and provides an impressive amount of functionality for what is, to all intents and purposes, a freebie.

The ESU1808's XLR inputs are described by the manual as having 'high-quality microphone preamps', and indeed they are fine, providing clear sound with no obvious colouration, just as you'd hope. A small amount of background hiss is detectable from the mic inputs and the front-panel 'instrument' inputs when their gain knobs are turned all the way up, but nothing excessive, and not enough to be problematic.

The device drivers seemed to perform well, and latencies low enough for ASIO input monitoring were easily achieved on my fairly basic test machine. One minor glitchI discovered is that clicking the 'Control Panel' button in Cubase LE's 'Device Setup' window fails to open (or bring to the front) the ESU1808's control panel window, as it ought to.

The ESU1808 is designed theoretically to allow 18-channel recording and eight-channel playback simultaneously. In practice, a number of variables can affect real-world performance: your computer's specifications (processor speed, RAM, hard disk performance, whether any other devices are attached to the same USB controller), the project's sample rate, and what buffer settings (and hence latency) you're willing or able to work with.

These caveats borne in mind, I found that the ESU1808 performed very well. I began with the sample rate set to 44.1kHz, and using just the 'Mix Out' monitor outputs (this seeming the most natural configuration for my modest home studio setup), I was able to record from the 16 analogue inputs into 16 separate tracks in Cubase LE, with latency set to the Control Panel's default 'normal', and without any discernible problems. There were no crackles and no drop-outs.

After a bit of rewiring, I distributed the playback channels among the eight analogue outputs, and tried recording some more passes. Again, the ESU1808 rose to the challenge. After switching the sample rate to 48kHz and starting over, I noticed that a couple of crackles did creep in, although they seemed to vanish after increasing the latency a notch. At 96kHz, my modest computer was beginning to show the strain, with a few more glitches apparent, but increasing the latency setting further did improve things.

With its numerous ins and outs, the ESU1808 offers a lot of flexibility, and at a reasonable price. If you can get by with fewer channels, there are cheaper interfaces available. However, if you need to record more than a dozen sources at once — or if you'd simply prefer to avoid re-patching, and select sources in software instead — there's really not much competition in this price bracket.

In terms of the sheer number of input and output channels, there aren't too many competitors in this price bracket. Tascam's US1641 (reviewed in the June 2008 issue of Sound On Sound) offers 16 inputs, with more XLR inputs, for comparable money. MOTU's 828 Mk II USB might be another alternative, and also includes ADAT digital I/O.

A versatile audio interface with more inputs, outputs and all-round flexibility than you'd usually expect for this kind of money.