If you've ever dabbled in the world of software amp, speaker and effects modelling (as most recording guitarists now have), you'll no doubt be familiar with IK Multimedia's Amplitube, which is one of the leading products in this market. If you've somehow managed to let this piece of software pass you by, it's well worth reading the review in SOS July 2006, and those of various related products such as Ampeg SVX (SOS November 2006) and Amplitube Jimi Hendrix (SOS August 2007).

The latest additions to the IK Multimedia guitarist stable — alongside their new Stomp IO interface — are X-Gear and Amplitube Metal, both of which are reviewed here.

X-Gear is one of those products that's very simple in concept, but very useful in practice. It provides you with a single interface for the whole family of Amplitube products, including the bass equivalent, Ampeg SVX. Until now, you couldn't mix and match the various elements from the different products in this range — so you might own the Jimi Hendrix edition but you couldn't take the Univibe emulation from that and place it in the chain of the standard Amplitube plug-in. Nor could you mix and match amps and cabinets from Amplitube and Ampeg SVX. Or... well, you get the picture: you couldn't do this before, but now you can. On loading, X-Gear (whose GUI looks just like Amplitube's) recognises what other Amplitube products you have installed and allows you to do all the mixing and matching you like. It's that simple. However, it is perhaps worth mentioning that the result is one of the most comprehensive modelling products on the market to date — and for me one of the best such products that can be used with any sequencer on Mac or PC, without the need for dedicated hardware.

X-Gear adds a couple of other useful functions that you won't find on your existing Amplitube products. There two buttons at the top of the interface, one labelled 'Automation', and the other 'MIDI'. The latter is a standard MIDI learn function, which enables you to quickly map a MIDI CC to one of the plug-in's controls. These are intended for use with the Stomp IO, but you're easily able to set things up with a cheaper MIDI foot controller such as the Behringer FCB 1010. The automation feature allows you to select up to 16 automatable parameters that can be seen by your DAW, and to allocate MIDI control numbers to them. The process is painless and a very useful addition. And the best thing about X-Gear? Its price... or, to be more precise, its lack of price, because it comes as a free download to anyone who already owns an Amplitube product.

Of course, another benefit of the X-Gear system is that if (or more probably when) IK Multimedia launch new products, you can choose whether or not you want to add them to your system — so you'll only pay for the bits you need. The latest such offering is Amplitube Metal which, like other Amplitube plug-ins, can run on its own or as a VST, RTAS or AU plug-in in a host sequencer. 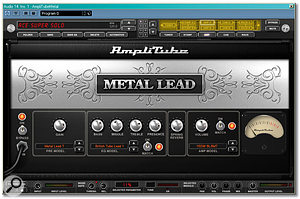 The main interface for Amplitube Metal, showing one of its five impressive new amp models.Heavy metal seems to be undergoing something of a renaissance at the moment. I can't say that I'm personally a huge fan of the genre, but I do appreciate that it has spawned some fantastic-sounding pieces of gear. So, while the name may conjure up unwanted images of greasy-haired, pasty-faced, acne-ridden oiks, competing noisily in the local guitar shop to see how many notes per second they can coax out of garish, pointy-headstock guitars (and it is certainly capable of keeping such fretboard-onanists entertained for hours), you needn't fear, because this is actually a genuinely useful tool in a much wider studio and performance context.

As with the other products in the Amplitube range, Metal comprises five separate modules: a tuner, an effects pedal board with insert slots into which you put the modelled effects in the chain before the amp (unfortunately, you still can't drag and drop these to change the order of your effects chain — if you want to do this, you have to reload them in a different slot and dial your setting in again), an amp-head section, a cabinet/speaker section, and one for post-amp rackmount effects.

As well as the usual Amplitube choice of six different microphone models, there are five new amp models developed specifically for Amplitube Metal — they are reportedly modelled on the Mesa Triple Rectifier (clean and lead channels), a Peavey 5150 100W head, the Randall Warhead and the Marshall JMP100. They're all pretty good, very usable models, and offer a palette wide enough to cover a range of metal styles from the '70s to the present day. You also get 13 different cabinet models modelled on various Fender, Mesa, Peavey and Marshall units (of course, this being metal, you can have any shape you want as long as it's a 4x12...). 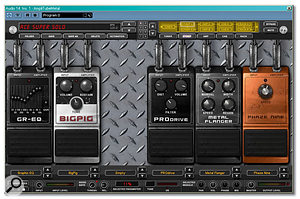 Recognise any of these? Amplitube Heavy Metal offers a range of classic stomp-box models, which can be mixed and matched with other Amplitube products using the free X-Gear software.For me, the stand-out feature is the new array of stomp-box effects. There are several 'industry standard' pedals here — and the Electro-Harmonix Big Muff and ProCo Rat models alone would provide reason enough for me to invest (the Big Muff, for example, makes a great addition to Ampeg SVX via X-Gear), but you also get a range of other stomp-box models, such as the Digitech Whammy, a Vox Wah, an MXR Phase 90 and several classic Boss pedals, some of which now seem always to find a place on my virtual pedal board. I don't use the hardware originals of all of these, but for those I do the models come pretty close to the real thing — and certainly close enough that the benefits of using them as plug-ins, with the additional control you have in the mix, outweigh any tiny differences from the hardware.

At £184 including VAT (or £156 crossgrade if you already own an IK Multimedia product), Metal is pretty good value as a product in its own right, too. The pricing structure can get a little complicated (to your benefit) when you start to factor in the availablility of bundles, crossgrades and 'street' prices. As I was just finishing this review, IK Multimedia announced that during the summer they'd be releasing the Total Guitar & Bass Gear Bundle — comprising Amplitube 2, Amplitube Jimi Hendrix, Amplitube Metal, Ampeg SVX and X-Gear — for a modest £349 including VAT, which obviously makes it a direct competitor on price for Native Instruments' Guitar Rig. They're slightly different beasts, of course, but for me the IK Multimedia package edges it (as much because of the interface as the sound).

All in all, I have to give these two new products from IK Multimedia a hearty thumbs-up. I'd certainly recommend getting X-Gear and at least downloading the demo of Amplitube Metal. Matt Houghton

An amp simulator full of impressive amp and cabinet models and effects. There's actually plenty on offer whether or not you like 'metal'.

Studio Devil's Virtual Guitar Amp is the creation of America-based Marc Gallo and, as illustrated by the screenshot, is a rather cool-looking amp emulation plug-in that comes in PC-only VST format. Of course, there are all sorts of options for the guitarist when it comes to getting a good recorded tone, from Pods to plug-ins to (steady on!) a guitar amp and a microphone. However, as long as your audio interface is capable of low enough latency for real-time use, virtual guitar amp plug-ins can be very convenient, and make the whole process of 're-amping' (recording a dry DI guitar track and passing this back through an amp to tweak the sound as required during the mix stage) much easier.

The Studio Devil Virtual Guitar Amp offers a very respectable sound for the price.The plug-in is supplied by download and comes with a useful nine-page PDF manual, which is very clearly written and describes the installation and activation process (using a serial number) in detail. The interface is very straightforward and nicely 'amp'-like. The combination of three preamp 'styles' and three channel types gives nine amp models, a total that is doubled by the Boost switch. The documentation lists the classic tube amps Marc is attempting to model, which includes all the obvious candidates.

Most of the remaining controls are pretty self-explanatory. The Gain and Tone controls operate as they do on a real amp, and the Power Amp knob provides a master volume control. There are Stack (4x12) and Combo (1x12) cabinet emulations provided, along with a DI Box option, which bypasses the speaker simulation. The only other feature is a basic noise gate.

Some 20 presets give a decent idea of the range of tones available, from warm and clean ('Mild Combo'), through a range of low to mid-gain rock tones (for example, the excellent 'DC/AC') and on to metal territory ('Killer Rack Shred'). The basic quality of the tones available is good, and with a bit of reverb added from your host program, very convincing sounds can be created. My favourite tones were those in the low to mid-gain range. To my ears, at least, the cleaner sounds could have done with just a little more sparkle (although this can be added with EQ), while the high-gain sounds most certainly need that noise gate. Noise isn't an issue if you're playing with gusto, but lay back a little and it becomes more obvious.

Studio Devil's Virtual Guitar Amp does a good job in a no-fuss fashion. The sounds perhaps lack a little refinement compared with something like the Pod XT or X3, but it is also considerably cheaper — and I could easily imagine installing a copy on my laptop to save lugging a desktop amp modeller around when recording on the move. A fully functional demo is available from the web site, so you can try before you buy (for $79), and there's also a free Studio Devil BVC (British Valve Custom) plug-in for both Mac and PC, with a simpler control set and a single amp model. John Walden

A modestly priced guitar amp and speaker simulator that offers a good range of tones and won't break the bank.