Etymotic Research, leading makers of high-quality earphones, recommend this model for in–ear stage-monitoring use. We find out whether hearing is believing. 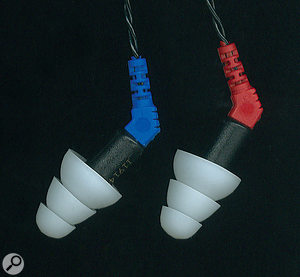 In-ear monitoring has been with us for some years now, and it divides people into believers and cynics more than any other technology I've come across. I think that this is to do with the fact that the more isolation the manufacturer manages to achieve, the more it becomes clear that we subconsciously use our ears to adjust to our surroundings. Not only are our ears crucial to our balance (which is why we feel disorientated and off-balance on aircraft when there are pressure problems), but our brain also interprets incoming sound for sonic clues about the space we are in. I have some great Bose noise-cancelling headphones which some friends absolutely hate, because although the headphones sound great, they make them feel 'weird.' If this happens even before you go to in-ear monitoring, the effect is likely to be exaggerated with the increased isolation that results from the ability to exclude external sound via a seal between the ear canal and the phones themselves.

A Word In Your Ear

This kind of isolation is exactly what Etymotic Research have managed to produce, using a dual-option monitor earphone that offers a choice of three-flange plastic eartips (giving 35dB of isolation from external sources) or foam tips (giving 42dB of isolation). The earphones are supplied in a neat protective plastic storage case with foam insert, and come with two spare pairs of three-flange tips and various other accessories.

Crushing the eartips before you put them in your ear means that the tips then expand back out to form a good seal with your ear canal, which can be improved, in the case of the three-flange plastic tips, by applying moisture before you insert them. The whole process of inserting them is relatively easy and gets better with practice, but it can be a bit tricky to get them in exactly the right position, and if you don't achieve this the bass response can be a bit weak. However, while you move them around it becomes instantly clear when they're pointing in exactly the right direction, as the bass response improves significantly. It can take up to 30 seconds for the pressure to equalise, which means that the initial sound that you hear is not very accurate. After a minute or so, once everything has settled down, the situation improves remarkably.

The effect is quite astounding, as the environment that the sound was recorded in (or the artificial reverb that has been added to studio sound) is now more audible than ever. (Of course, this is precisely what can lead to the alienated feeling that some people experience.) Certainly, the ER4s are far more effective at noise isolation than even the best closed headphones.

We asked record producer Martyn Phillips (Jesus Jones, Londonbeat, Roachford, Erasure) for his thoughts on the ER4P version of Etymotic's earphones (also £199.98), which have 10dB increased sensitivity in the mids and highs and 13dB extra at the low end, and are designed for use in conjunction with MP3 or portable CD players. Martyn comments:

"I did find it a bit tricky to get the right position for good bass response, but once you move them around you soon hit the sweet spot. There's good isolation, especially when you get the rubber seal right (then there's the benefit that you don't need to have the sound so loud to hear detail), good definition — quite a perceived lift from 1k up to 3k, peaking around 2kHz — and added sparkle. This does make the sound a little hard, as compared, say, to Apple's iPod in-ear phones. But as long as you don't mind the fact that the insertion process is a bit fiddly and that it's a minute or so before you hear the best sound, it's quite a rewarding experience." 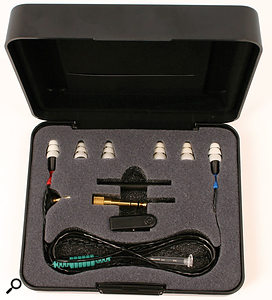 Using music sourced from a CD player, the results are sensational, but the real test is when you use the earphones elsewhere, so I took them along to rehearsals with my band. We suffer from the usual problem of a guitarist who won't turn down (because the amp doesn't sound right). Using the earphones with a feed from the PA in the rehearsal room, I found myself not only able to hear for the first time what I was playing on the keyboards (I always go direct to the PA), but also, better than ever before, what all three singers were doing. The ER4s are particularly responsive to the frequencies at which the human voice exists. Not being a singer myself, I am unsure how successfully a singer could use them. Chewing causes the ear channel to change shape, changing the position of the earphones. I suspect that a heartfelt emotional performance might have a similar effect.

I find the rehearsal room a very problematic environment, because the guitar amps are in such a confined space, so rehearsing with these earphones has been a revelation. Not only is the clarity there, but you also hear a much more faithful reproduction of the sound coming from your instrument, as the colouration caused by the imperfections of the PA system and the effect of the room on the sound are completely removed.

Etymotic Research have won awards for their earphones, which are produced in various versions, and have apparently found the ER4S model popular with stage musicians. I can see why: the disorientation caused by your separation from your sonic environment soon passes, and once you relax into hearing what you (and others around you) are actually producing, it is a very liberating experience. While you may not want to wear them in the street, for fear of being run over, in the studio, rehearsal room or on stage you really want to hear what you are actually doing. The Etymotic ER4S earphones gave me more confidence than ever before that this is what I was hearing. They may seem a little insubstantial for £200, but they actually deliver the same sort of quality as an expensive pair of studio headphones.

Once the insertion process has been mastered, this is an extremely good way to hear everything that's happening on stage, or to enjoy the most from digital music sources.