MangledVerb first appeared as an algorithm in the rackmount Eventide Eclipse effects units. It then migrated to the H9 guitar pedal, and has now been made available as a self-contained plug-in supporting all the usual formats. Two iLok authorisations are included, so you can use the plug-in on two machines. Eventide describe MangledVerb as “Good Verb Gone Bad”, and as the name suggests, it’s designed to produce special effects as well as natural-sounding reverberation. The signal flow follows a mostly conventional path, with pre-delay, reverb and EQ, but this is topped off with distortion, and the breadth of treatments on offer range from smooth and creamy to downright ugly. The effect works particularly well on guitar or for adding filth to percussion, but in reality there are no rules. 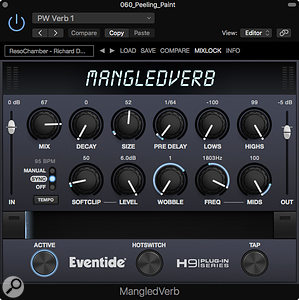 It inherits the ribbon control that forms an integral part of many Eventide plug-ins and which can be controlled using DAW automation, allowing you to morph between two completely different sets of control positions; alternatively, a programmable Hot Switch permits instant jumps between alternate settings. Ribbon position can be set using MIDI mod wheel control messages in those DAWs that enable MIDI data to be routed to effects. MangledVerb also includes a tap tempo function, while Mix Lock lets the user dial through the presets keeping a fixed wet-dry mix. All Eventide’s usual patch save, recall and compare modes are implemented. There’s a library of artist-created presets to give you some idea of the scope of the plug-in, but the control panel isn’t at all daunting if you want to start from scratch.

An Input knob sets the level into the plug-in and there’s also a separate Out level control, assisted by both pre- and post-effect level metering. Decay adjusts the length of the reverb, but also modifies the reverb attack, so at longer Decay times the reverb also builds up more gradually. Size, as its name suggests, governs the size of the synthesized environment, while pre-delay can be set up to 1.5 seconds. Wobble affects both the depth and rate of reverb modulation, creating some useful detuning effects or a gentle shimmer at lower settings.

By way of EQ, there’s a Low, a swept Mid and a High section, all offering either cut or boost. The output from this EQ then hits the distortion, which can be set to soft clipping or overdrive using a variable Drive control; the first half of this knob’s travel controls the soft clip gain, but past halfway the effect changes to overdrive. A separate output level control is used for the distortion section, and there’s also an output Level control which adjusts the output from the entire plug-in. Pre-delay can be set manually, sync’ed to host tempo or tapped in.

As a basic reverb with variable pre-delay and modulation, the plug-in offers plenty of scope for creating clean-sounding reverbs, and even when you dial in just a bit of distortion, the sound remains sweet but with more density. However, when you add more distortion the sound starts to get very gritty, which is good for adding filth to drum loops, scrambling synth sounds and for creating more industrial guitar sounds. If you need a smoother sound, it is worth experimenting by putting a top-cut EQ or speaker emulator plug-in directly after MangledVerb, but then I don’t think smooth and polite is what the designers had in mind for the distortion part of this plug-in. In typical Eventide fashion, then, MangledVerb takes a pristine effect and then gives you extra tools to mess it up in a creative way. What’s not to like?