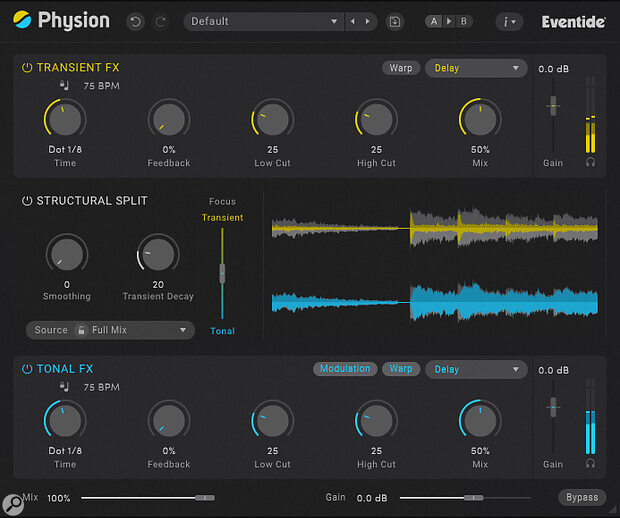 We check out the updated version of Eventide’s creative ‘Structural Split’ effect.

Physion separates the incoming audio signal into Transient and Tonal signals such that they can be treated independently before being recombined. It can be used for corrective purposes, such as emphasising or de‑emphasising the transient of a drum hit, or for creative effects such as adding dreamy delay or reverb effects to guitar parts. A favourite trick of mine has been to use only the Tonal sustain portion of a guitar signal to create an excellent slow‑attack effect which works reliably, regardless of the input signal level. Physion Mk II takes the concept further, largely by adding a raft of new effects.

Many of these effects have been ‘borrowed’ from other Eventide products; the filters, for example, are the same as those developed for Eventide’s Split EQ. The spectral pitch‑shift is a new one to me, though, and apparently it’s based on Eventide’s new SIFT (Spectral Instantaneous Frequency Tracking) technology. It’s very different from the traditional ‘slice and crossfade’ approach, and the practical outcome is that the result sounds much smoother. There are now side‑chain Inputs for dynamics effects too, and a choice of three colour schemes: Normal, Dark, and Alt.

A moving waveform display shows the separated transient and tonal components, and if you simply want to use one component (for example, to create that slow‑attack effect), you can turn down or off the Transient or Tonal section. A Structural Split control section allows the user to set the decay time of the extracted transient; Smoothing and Focus controls adjust how the algorithm classifies Transient and Tonal material. The Transient signal can be treated to Delay, Tap Delay, Dynamics, Phaser, Reverb, Gate with EQ, or Reverse Delay. For the Tonal component, the choices are Delay, Dynamics, Pitch, Chorus, Reverb, Tremolo, EQ and Reverse Delay. For the dedicated Pitch effect, three pitch‑shifts can be engaged simultaneously, each with a range of ±1 octave and fine‑detuning options. When Reverse Delay is selected, buttons for Ping Pong and Crystals allow presets for these effects to be added, and there’s a single pitch‑shift option. A further control sets the Envelope Retrigger threshold for the reverse effect, and a button allows reverse effects to be triggered manually. Normal delay offers Modulation or Warp options, again in preset amounts, and delays may be adjusted freely or tempo‑sync’ed. Each effects section has its own wet/dry mix and gain controls, and master Mix and Gain controls as well as a Bypass button are found at the bottom. Either section can be soloed.

You can have plenty of fun processing vocals or other less obviously percussive sounds.

In use, the first step is to optimises the splitting algorithm for the source: you select from a list of instrument or voice types (a general setting seems to work pretty well for most unlisted sources) and, when using pitch‑shifting, choosing mono or poly mode (the latter uses the new SIFT algorithm). Then you adjust the Structural Split and start adding effects.

With all the new effects options, the range of results you can achieve is expansive, from EQ’ing transients or dynamic modifications to huge ambient washes. Those into ambient guitar or keyboards will appreciate the Reverse Delay, as engaging Crystals produces the same kind of result you might expect from a dedicated granular processing effect, adding an interesting texture to reversed delays without getting in the way. Meanwhile, a different effect could be added to the transient part of the sound. For example, the Tap Delay allows the user to set the number of taps and then adjust their level taper and whether or not the time between taps progressively increases or decreases.

There are 500‑plus presets, which demonstrate the full range of effects on offer, but creating new ones is easy. In fact, I soon found myself creating and saving new user presets, and it was such fun that I found it hard to drag myself away and focus on this review! An A/B Comparison and Undo/Redo feature can speed up workflow, as do the optional Tool Tips.

Eventide have always produced excellent effects, and when you dial in reverb, delay or modulation, Physion Mk II always sounds seriously good. The same is true of the pitch‑shifting, though one limitation is that you can’t adjust the balance of the three pitch‑shifters; they’re either on or off. Having only an on/off button for the Crystals effect is less restrictive, as it seems perfectly dialled in to add just the right amount of glitter and interest to the reverse delays, though there’s no option to add it to regular delays.

The outcome is most predictable when using sounds with a clear attack, such as guitar, piano or drums, but you can have plenty of fun processing vocals or other less obviously percussive sounds. For example, adding a long reverb to a vocal’s transient but a reverse delay to the tonal portion produces a very ethereal result! In short, Physion Mk II is a real step up from its predecessor, and given my penchant for incorporating ambient elements in my own compositions I can see it getting a lot of use.

With a raft of new effects on board, Eventide’s wonderful ‘structural split’ plug‑in now boasts more creative potential than ever.