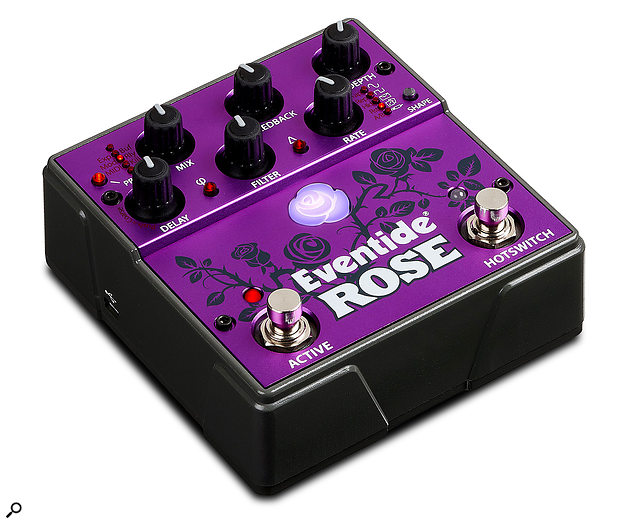 This stompbox combines analogue and digital processing to offer bucket-brigade warmth without the down sides.

Eventide have a long history of building high-quality digital effects devices, and as you'd expect their new Rose delay is indeed a digital pedal at heart — but that's far from the whole story, because this particular device has some very analogue ambitions! Not only are the mixing, filtering and feedback circuitry analogue, but the pedal also employs a digital delay system that isn't based on DSP. Instead, it takes the old-school approach of using a variable clock speed to change the delay time. By default, the delays range from 10 microseconds to 10 seconds, but with the range multiplier switched in, they can be up to 50 seconds long. There's also a very flexible modulation section, but before I dive in and discuss what all this can sound like, it's worth exploring the controls and connections that are set out around that chocolate-box front panel.

The Rose has a single TS jack input that can be switched to accept line– or instrument–level inputs, and from there the dry signal path is all-analogue. There's a single output (this is a mono pedal), and there's another jack to which you can hook up a footswitch or expression pedal. Power comes from the included adaptor, and a USB port caters for both firmware upgrades and MIDI control. Six knobs, four small buttons, a pair of footswitches, and a handful of LEDs are used to navigate the settings. The central rose logo pulses according to the modulation source and also changes colour depending on the modulation type selected. 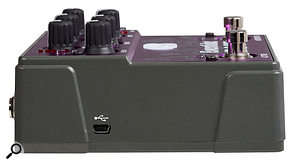 The USB port caters for both MIDI control and firmware updates.As expected there are Mix, Feedback and Delay controls, and a further Filter control sets the 'brightness' of the delays — turning it clockwise makes the sound duller and more 'bucket-brigade' in character. Delay adjusts the fine delay time and incorporates a push switch for selecting a coarser adjustment — press and hold for coarse adjustments, and the range will show up on the Preset Ladder LEDs. There's also a delay range multiplier button with a delta graphic below the Feedback control. Hold this down and you can use the Shape button to step through the options (two, three, four or five times the 'standard' delay). This is achieved by lowering the sampling rate, and is how the 10-second delay can become a 50-second delay. You can escape from this and most other setup modes at the tap of a footswitch.

The modulation section has the expected Rate and Depth controls, and the small Shape button and five LEDs to the right of the Rate knob set the modulation type. The choices are sine wave, square wave, envelope follower, random or external — the latter handing over manual control of modulation to the Rate knob. Gentle application of the Random modulation setting provides a good emulation of tape delay, and it can also be used to create a convincing ADT effect when combined with a single, short delay. Some other functions are listed to the left of the status LEDs — these are used when setting up footswitch or external control assignments, and the fainter text means it's not a distraction when using the pedal's main controls.

Below the Mix control is a Flip switch with a phi symbol. At short delay times this inverts the delayed signal's polarity so you can creating comb-filtering effects, but at long delay times it instead engages a reverse delay effect. Above the Delay control is another button with another five status LEDs, affectionately known as the Preset Ladder. This also has faint legending on each side and is used when customising the controls. Up to five presets can be saved if you don't have a use for the factory defaults. The Preset button is used to access presets and to save them: press and hold the Preset button (the current preset LED will flash) then press the Preset button again to step to the desired target slot, then press and hold Preset again until the LED flashes quickly to show the patch has been stored. 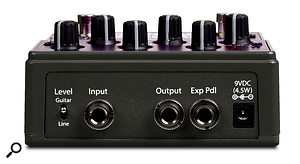 The Rose is a mono pedal, which can accept line or instrument inputs, as well as an external footswitch or expression pedal.Two footswitches with status LEDs, the left labelled Active and the right Hotswitch, control the effect, and once again these can be set up to perform different tricks. The Hotswitch can be set, using a sequence of button presses, to switch in a range of functions including Tap Tempo, Infinite Repeat, Hold Mod, Reset Mod or A/B switching. It can also be set to toggle the Invert/Reverse or Time Multiplier button functions. If you want to use external switching via the TRS expression pedal jack socket, the options are tip to ground, ring to ground or both tip and ring to ground at the same time, which allows for three switches to be connected.

Each preset incorporates A and B variations on the control settings so, as well as switching between them, an expression pedal may be used to morph between them, in a similar manner to that seen in some other Eventide pedals. In addition to hosting switches, the TRS expression jack input can also be set for use with modular gear (CV from 0 to 3.3 Volts) or MIDI (via an adaptor cable). Another button–pushing routine allows the MIDI channel to be set. The Active switch can be set to buffered or relay-switched bypass, or to Input Kill mode. MIDI may be used to address all key parameters and to implement direct LFO modulation, and the delay value can be accessed using Continuous Controller messages. MIDI can also be used to handle SysEx dumps; the full MIDI implementation is available as a download.

"This really is a very lush-sounding delay — the term 'musical' is overused these days, but it's well deserved in this case."

The variable clock rate gives the Rose a very smooth, natural sound, and this is helped along by a soft clipper. The clipper is placed before the delay input, so as to smooth out any nasties before they enter the effect. Using the Filter control, the repeats can go from super clean to quite murky. Having so many modulation options is obviously very useful, and both the Envelope and Random settings sound good as long as they're used sparingly, lending the sound a somewhat 'organic' feel. This really is a very lush-sounding delay — the term 'musical' is overused these days, but it's well deserved in this case. Because the delay time can be set very short indeed, the Rose can also be used to create vintage chorus and flanger-type effects, not to mention slapback echoes and vibrato. For those who like to twiddle as they play, the Rose can also conjure up some nifty dub-style feedback tricks, near-infinite repeats (indeed, I could probably say infinite, but the sun will eventually go nova and put a stop to that...), or pitch glides as the delay time is changed. With an external pedal connected, the effects can vary from quite subtle to a sea-sick orca in a tumble drier, so if you're a fan of excess, there's plenty of that to be found here too. And that reverse delay is a hippy's dream... 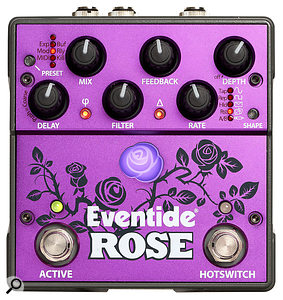 What the Rose can't do is give you a multi-head tape emulation, and it doesn't have a stereo output — but then that's really not what this pedal is about. Rather, it channels the vibe of a bucket-brigade delay but without the unwanted noise, without the maximum delay-time constraints, and without excessive signal degradation. It throws in a handful of extra modulation options too, which is great — though it does mean you have to keep track of the various 'hold this and press/turn that' routines, as not all are obvious from the outset. Some functions also seem to need you to hold a button down for a second or two before the control mode changes, so I hope a more detailed manual will eventually follow the 'getting started' manual that comes with the pedal. As there's a USB port on board, a software editor would make a nice addition in the future too.

As we've come to expect from Eventide, there's enough tweakability and external controllability to keep the geeks amongst us happy for hours, but at the same time those who just want a really sweet-sounding delay with some useful modulation options won't be intimidated by what they find — there's plenty of scope to play with even before you explore all the deeper editing options. There's very little not to like here!

The delay pedals from Catalinbread, such as their Echorec, are the closest I've heard in terms of smoothness and their responsiveness to hands-on control.

Once again Eventide have shown that they can bring something fresh to an established effect type.