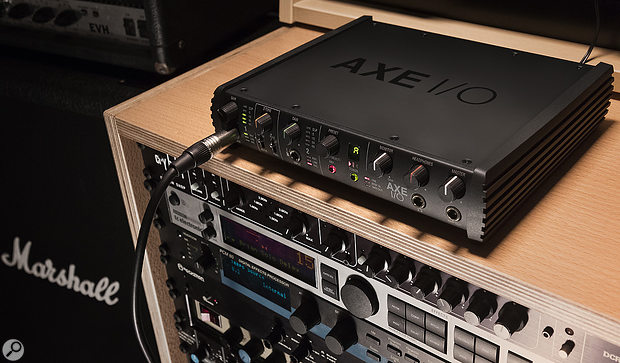 IK's Axe I/O could be the perfect audio interface for recording guitarists.

IK Multimedia were one of the first companies to get into serious guitar amp and effects modelling software, and they've since built up a catalogue of over 400 modelled pieces of gear. However, the way the guitar interacts with the input stage of an amplifier is also important for achieving both the right sound and playing feel, so they've studied that too and put the results into practice in their new Axe I/O USB audio interface. And the results are just as applicable to bass players as to guitarists.

The Axe I/O, which comes with an external PSU, is configured as a two–input/five–output audio interface and controller. A Control Panel is installed when you download the necessary drivers, and this lets you organise the I/O routing and controller inputs, and activate phantom power, set ground lifts, change the sample rate and so on.

The Axe I/O is designed specifically to woo the recording guitarist and has what IK describe as a triple-topology for channel 1. Options one and two comprise a fully discrete instrument input circuit combining both 'Pure' and JFET input stages, to offer a choice of clean sound or valve-like warmth. Option three bypasses part of the input gain stage for use with instruments that have active pick-ups. The proprietary Z‑Tone impedance-adapting input circuit on channel 1, adjustable from 1MΩ down to 2.2kΩ, mimics the interaction between a passive guitar pickup or a lower–impedance pedal and a valve amplifier input stage. Channel 2 is more conventional.

There's a separate low-noise amp output within easy reach on the front panel, designed to avoid ground loops and to optimise the signal path for recording or re-amping with 'real' guitar amps and pedals. Indeed, the overall tech spec is impressive, with a quoted 117dB dynamic range and a 3Hz–32kHz frequency response, through 24-bit low–jitter converters at up to 192kHz sample rates.

Unlike Audient's foray into guitarist-friendly interfaces with their Sono, the Axe I/O doesn't include DSP modelling but instead comes with download codes for AmpliTube 4 Deluxe (over 140 amp, cab and effects models) plus 10 key T-Racks studio processors and a copy of Ableton Live 10 Lite thrown in for good measure. Presets and the controls of software rigs can be accessed using the input knob rather than a mouse: push and turn the knob to select and load presets, with the option to assign the knob to any parameter as required.

The front panel features two instrument input jacks suitable for both guitars and basses. Both inputs have gain controls, inst/mic/line LED status indicators and five-section LED level meters, while channel 1 additionally includes the variable Z‑Tone impedance control and switching for the input modes, as mentioned earlier. There's also a built-in tuner, with its window and activation button handily placed on the front panel.

On the rear panel are two 'combi' jack/XLR inputs, with the option of phantom power making them suitable for capacitor microphones or active DI boxes, as well as line–level sources. Two controller inputs can be used with optional expression pedals or switches to control AmpliTube or other software. Volume fades or wah–wah pedalling are obvious applications, but there are many other options, and AmpliTube's MIDI Learn function makes is straightforward to assign any parameter to a pedal. It is possible to create up to six different controller configurations of pedals and/or switches. The Axe I/O's standard MIDI I/O ports can be used with third-party floor controllers or IK's own iRig Stomp I/O.

The five audio outputs comprise a L–R pair of TRS jack floating balanced outputs (which can be connected to active studio monitors if required), two unbalanced line outputs (3–4) on jacks and the aforementioned floating, unbalanced amp out on the front panel. Looking at the outputs, in Logic Pro at any rate, they all show up as stereo pairs (1–2, 3–4 and 5–6), even though the fifth (amp) output is mono only. If you still need to use outputs 1–2 as monitor feeds, then using a bus to feed output 5/6 from your clean guitar track when re-amping is a simple option.

There's also a headphone output, again on the front panel, with independent level control for the phones and monitor outs, so monitor speakers and headphones can be used at the same time. A no-latency Monitor knob mixes direct input monitoring with the DAW return, though clearly the direct input doesn't include the sound of any plug-in processing, and the track being recorded usually needs to be turned down within the DAW to avoid hearing both the direct and delayed versions of the sound.

When re-amping, the ground isolation of the amp output really helps, as a clean recording can be played back via the amp out jack and then fed to an amplifier or chain of pedals without provoking ground-loop–induced hum. This strategy also allows for working with minimal re–patching, which speeds up workflow.

The Axe I/O represents exceptional value as you get a well-designed, clean-sounding, guitar-friendly interface along with a very serious bundle of software.

Before using the Axe I/O it is necessary to download the IK Authorisation Manager from their website and to register the codes that come with the unit so that you can download the necessary software. Once the software is installed, you have a control panel that shows two views: the inputs and outputs plus switching options or, via a second tab, your controller assignments for expression pedals or switches.

As a straightforward interface, the Axe I/O sounds very clean both for playback and for recording. The guitar options on channel 1 are interesting, as switching between Pure and JFET brings about a subtle but nevertheless tangible change to both tone and feel that I might best describe as a very gentle smoothing and warming, but without introducing any obvious distortion. The input sounds brightest at maximum input impedance, as you might imagine, but adjusting the Z‑Tone knob gradually darkens the sound as the impedance is lowered — sometimes lowering it just a small way from maximum helps take away the brittle edge from some guitars. I found the tuner a little 'skittish' when tuning my Strat, but it is usable with care.

Logic users will be familiar with the way MIDI data is blocked from effects plug-ins inserted on an audio track, so if you use AmpliTube 4 in this way everything works other than patch selection from the front–panel knob (which relies on USB MIDI). This in reality isn't a big deal unless you hook up some switches and expression pedals that also rely on MIDI to communicate with the software. However, you can also instantiate AmpliTube 4 as a MIDI Controlled Effect on an Instrument track, in which case you have to feed the plug-in's side-chain input from the physical input to which the guitar is connected. In this role, the patch selection works and MIDI gets through as it should. Users of other DAWs can snigger in satisfaction at this point.

All in all, the Axe I/O represents exceptional value as you get a well-designed, clean-sounding, guitar-friendly interface along with a very serious bundle of software. Using AmpliTube, you can recreate a wide range of classic guitar sounds without ever turning on an amplifier, while the T-Racks studio processors are good to have on your side during a mix. The free Lite version of Ableton's Live is also a great way to get into composing.

If you only want to record guitar, then the Line 6 HX Stomp is a good option, and of course there are many other interfaces without the variable impedance option that work well with third-party amp modelling software. There's also the Audient Sono, which takes a different but equally valid approach.

If you don't already have good amp modelling software, this bundle makes a lot of sense and will meet the needs of anyone who records only one or two parts at a time.