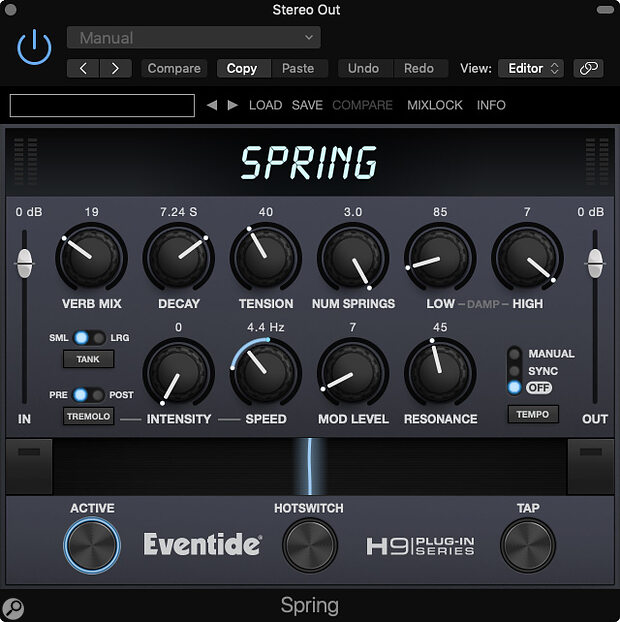 Back when spring‑based devices were the only affordable means of creating artificial reverb, we all complained about their twangy attack and metallic overtones but, as with tape distortion, we found we missed it once it was gone! Available as a plug‑in supporting the usual Mac OS and Windows plug‑in formats and as an iOS App, Eventide’s Spring is a meticulous emulation of the kind of spring reverb you might find in a guitar combo, but with an extended parameter range that allows it to be used more creatively than the real thing.

Alongside the wet/dry Verb Mix and Decay knobs, there are controls to adjust the spring Tension, the Number of Springs (anything up to three, including fractions of a spring!) and both Low and High damping. There’s a Tank switch to select large or small reverb tanks, plus another entire row of controls dedicated to Tremolo, with Speed and Depth, plus Modulation. There’s also a switch for adding the tremolo Pre or Post the reverb.

I found the most ‘natural’ reverb sounds occurred with the Tension set fairly clockwise and the Tank size to large, but other settings can be really good for special effects, especially when used in conjunction with tremolo and modulation. The Tremolo feature is useful for the creation of amp‑like tremolo, making it a natural partner for spring reverb.

Spring is by no means limited to use as a guitar effect. It can be used to create some wonderfully trashy drum sounds, lively vocals and textural synth treatments.

On the right of the lower row of controls, you can adjust the Modulation Level and Resonance, which controls a fixed‑speed pitch modulator to add a chorus‑like shimmer. Resonance operates at wherever the high damping frequency is set to and adds a subtle but useful edge to the modulated sound. Tremolo speed can be set manually, sync’ed to Tempo, tapped or be switched off. A Mixlock feature at the top of the window allows the wet/dry mix to be balanced when changing presets. There’s also a Compare function (not on the iOS version) for checking your current setting against the previous one.

At the bottom of the window is Eventide’s familiar horizontal morphing slider for morphing between two sets of parameter values, an Active switch, Tap Tempo and a Hotswitch for jumping between the two sets of control values. Setting up the ribbon’s parameter ranges can be achieved by dragging the white dot in the ring of any control to define the start position whereupon the control displays a blue arc showing the range over which that control can move during the morph. The ribbon position can be automated in most DAWs along with any other control, and in DAWs that accept MIDI control over plug‑ins, it responds to MIDI controller CC1 for use with a pitchbend wheel. Setting the Hotswitch involves dialling in start values, then holding down the Hotswitch while adjusting the knobs to their end values.

There’s a good selection of presets available that show off the range of this plug‑in, which goes from a very convincing guitar amp reverb to some fairly trashy and metallic effects. Perhaps the most surprising thing, though, is that even when the reverb sounds somewhat crude when set to 100‑percent wet, as some of the short spring settings do, it still somehow manages to integrate nicely with the dry sound when properly mixed. Furthermore, Spring is by no means limited to use as a guitar effect. It can be used to create some wonderfully trashy drum sounds, lively vocals and textural synth treatments. While tremolo makes it easy to nail those old surf guitar sounds, the pre‑post option combined with the separate pitch modulation also makes it easy to add movement or even rhythmic pulsing thanks to the tempo lock facility. This is not a particularly expensive plug‑in and it provides a refreshing change from all those polite digital reverbs so it is well worth a closer look.