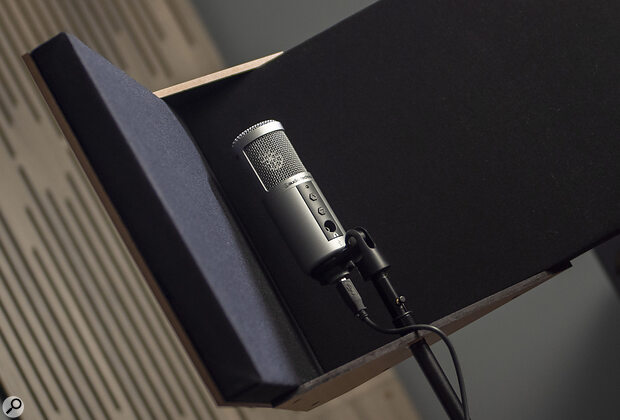 US‑based GIK Acoustics manufacture a range of acoustic panels and gobos in Bradford, UK and Kielce, Poland, as well as in the company’s homeland. It’s a strategy that reduces shipping costs, which can make a big difference for acoustics products, since they’re usually rather bulky relative to most studio gear. Their VISO microphone screen system, though, is one of their smallest products. With any type of portable vocal screen, there is a risk that it might add unnecessary coloration to the voice, but this one was designed specifically with a view to reducing the amount of coloration, relative to other ‘behind the mic’‑type products.

On opening the box, in addition to the assembly instructions, I found two separate panels, each measuring 420 x 290 x 60 mm, plus a pair of angled plates used to join them together. There were also two different sizes of mic stand adaptor, washers, a nut and a thread adaptor. The panels are constructed on a narrow wooden frame surrounding the absorbing material, which I’m told is Rockwool. The fronts and sides of the panels are covered, very neatly, with a porous black fabric. A slotted backing board is intended to allow some lower frequencies to escape, rather than reflect them back to the mic position, as well as acting as a diffuser for any sounds approaching from that side.

I found assembly to be incredibly straightforward: the screws used to hold the two angled plates to the panels come already screwed into the appropriate holes in the panel frames, so only need to be removed and then replaced once the angled plates are in position. The result is a rigid V‑shaped screen, with a hole in the lower angled plate accommodating one of the included standmounts.

Speaking into this screen produced no obvious perceived change in vocal sound, whereas doing the same with a competing screen resulted in more obvious midrange reflections. I assume that one reason for this are those slots in the backplate. If recording with the vocalist’s back towards a bare wall, I still like to set up an additional absorber behind the vocalist, to prevent reflections reaching the hot side of the mic, but even the humble duvet will perform well enough in that role.

Speaking into this screen produced no obvious perceived change in vocal sound, whereas doing the same with a competing screen resulted in more obvious midrange reflections.

In use, when mounting it on an inexpensive mic stand, I found it essential to set up the GIK VISO screen to be completely vertical, as the weight of the screen could otherwise cause the stand to droop. You could buy a sturdier stand, of course, but I set up my mic (an AKG C12VR) on a separate stand to allow for some positional variation, then recorded some vocals contributed by Alice Rose Wild. The mic was placed about half way back from the screen’s apex and in this configuration I found there was a worthwhile reduction in room coloration, but without any obvious boxy coloration from the screen itself.

While no screen can offer zero coloration, they can still be helpful, and I found nothing to worry me here. Importantly, the result was far preferable to having to record with excessive room tone intruding, or working in a less than perfect vocal booth for that matter. It’s intended to be standmounted and primarily for vocal use, but it can be used on other sources too, and its configuration means it could also sit on the floor in front of a guitar cab/combo. GIK’s VISO Booth also looks pretty neat and is sensibly priced.