Acoustic treatment is one of the best investments you can make for your studio, and there are plenty of companies offering pre-made products to solve a variety of problems at a range of prices. Here's just a selection of what's available.

Acoustics is a complex and often misunderstood subject, but with a few rules of thumb you can drastically improve your monitoring and recording environment. 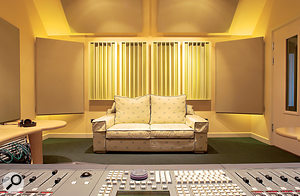 On the rear wall of this studio, you can see four wooden diffusors. Bass-trapping panels are hung in the corners, and absorbers have been placed on the walls' mirror points .If our Studio SOS visits have taught us only one thing, it's that acoustics is one of the most often overlooked topics in the world of sound. We're all trying to achieve more satisfying results with our music production, but the temptation is to look for equipment that will help us achieve better recordings, while neglecting to improve the rooms in which all our shiny gear is used!

Acoustics for studios actually boils down to two major issues: monitoring acoustics and recording acoustics. The latter is important because the natural reverberation character of a room invariably has a significant impact on the quality of recordings made there. Many of the home-made recordings we hear at SOS are compromised by the fact that they were recorded in domestic rooms, where the walls are parallel and fairly close together, leading to strong early reflections that can't easily be masked or disguised with processing.

The acoustics of your control room (or simply 'studio' if, like many of us, your recording and monitoring spaces occupy the same room) are equally important, because if they interfere with the sound from your monitors, they can mislead you into thinking your recordings are fine when they're actually not, or vice versa. Early reflections, as mentioned above, can seriously compromise the performance of your speakers by confusing their stereo imaging, and by introducing peaks and troughs in their high-frequency response. The low-end response of your monitors, meanwhile, is also at risk of being interfered with, especially in smaller rooms, where the amount of bass can be accentuated or understated to an alarming degree — and sometimes both, depending on where you are in the room!

In either case, the problem of early reflections can be solved with relatively thin absorption panels. These are designed to be hung or stuck to walls, where they prevent mid-range and high frequencies from bouncing around the room causing trouble. In control rooms, the first place you should consider hanging these is the oft-discussed 'mirror points'. These are the parts of a room's walls (and ceiling) that may reflect sound from your monitors before it reaches you at your monitoring position.

In recording spaces, you can apply a similar principle: walls that are likely to bounce sound from an instrument into a microphone are prime candidates for treating, as this reflected sound will interfere with the direct sound from the instrument, and usually for the worse.

Larger rooms are normally more benign in this respect, but they may still be worth paying attention to if you hear any problems. In smaller rooms, however, the natural ambience is likely to be counter-productive, so the most common advice is to eliminate most of the natural reverb during recording, and replace it at the mixing stage with artificial reverb from a hardware device or plug-in.

Low-frequency problems are a different kettle of fish. Low frequencies have much longer wavelengths than high frequencies, meaning that problems at the bass end require thicker absorbers to sort out than mid-range and high-frequency issues. In general, the placement of bass absorbers (or bass traps, as they're known) is also different. For them to be most effective, they tend to be placed in the corners of rooms: either where a wall meets another wall, where it meets the floor or ceiling, or where two walls and the floor or ceiling meet.

Aside from the more esoteric forms of acoustic treatment (such as tuned resonators, which are intended to solve problems at very specific frequencies), that leaves us with the matter of diffusion. Rather than soaking up sonic energy, as most other treatments do, diffusors are deliberately reflective. However, they reflect sound in a more scattered fashion than a bare wall would, and so maintain a room's 'liveliness' while avoiding excessive early reflections. They're often placed at the back of control rooms, where they add a small and benign amount of reverb to what could otherwise be an oppressively dry-sounding space.

As you can probably tell, the subject of acoustics is an enormous and complex one, and there isn't space here to discuss it fully. However, a good next port of call for anyone interested in improving their studio's acoustics is our 2007 article on the matter, which you can read online at /sos/dec07/articles/acoustics.htm. 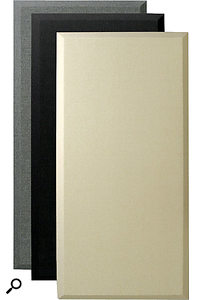 If the idea of hanging foam on your walls doesn't appeal, you may want to consider one of the fabric-covered absorption options, such as the Broadway panels from Primacoustic (the price given is for 12 panels measuring 12 x 12 x 1 inches each). Not only does the fabric covering make them more sympathetic to the look of most rooms, but they use mineral wool inside, rather than foam, which Primacoustic say makes them effective over a wider frequency range. 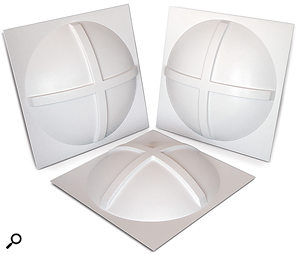 The Saturn is described as a "polycylindrical diffusor” and was conceived by aoustician Steven Klein. It's made from ABS plastic, and its unusual design is said to be more effective than a traditional diffusor when placed close to the listening position (as would happen in a small room). The Saturn comes in black or white, although it can be freely painted without any adverse effect on its diffusion properties. 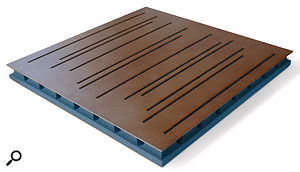 Portuguese company Vicoustic offer a range of products for both studios and home theatres, including budget foam absorbers, wooden diffusors and tuned bass traps. Their Vari-Panel Pros, sold in packs of six, are interesting in that they can provide either absorption or controlled reflections with the addition or removal of a wooden diffusion panel from the underlying foam. This allows users to easily swap from having a dry-sounding to a reverberant room, making the Vari-Panel Pro well suited to use in recording spaces. 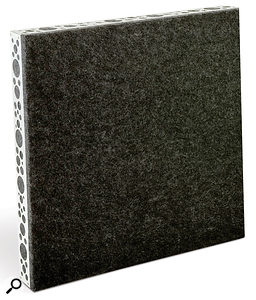 Ghost Acoustics are closely related to SE Electronics, makers of the Reflexion Filter. Most of their treatment kits are based around the Block, a 60 x 60 x 8cm panel made of layers of high-density glass fibre and aluminium. These can be wall-mounted using the supplied hardware, joined together, or used as gobos with the Gobo Stand. US pricing for the Block was yet to be confirmed. 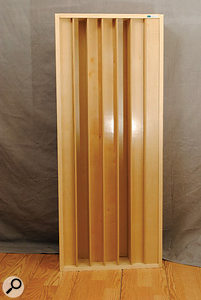 Although most acoustics products focus on removing sonic energy from a room, that's not always what's needed or desirable. The Q7D Diffusor from GIK Acoustics is designed to reflect sound back into a room, albeit in a more complex way than what happens when a wall is left bare. The scattering of sound that diffusors offer can give small rooms the acoustic impression of being somewhat larger, while also dealing with flutter-echo effects. The Q7D is also unusually attractive for an acoustics product, being made out of a light wood laminate. 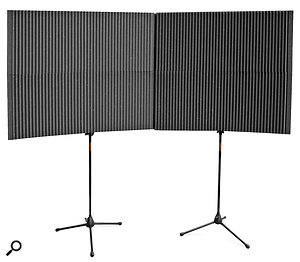 Auralex produce a vast range of cost-effective foam panels, including the MaxWall series of modular absorbers (the 420 kit is pictured). These can be mounted on stands, which is useful in situations where it's not possible or practical to attach absorbers to the wall, and easily reconfigured for use as absorbers in control rooms, or as makeshift vocal booths or gobos. 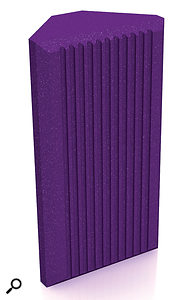 There's no doubting that foam tiles are useful for absorbing early reflections that would otherwise confuse the stereo imaging from your monitors, but these tend not to be effective at low frequencies. That's where bass traps, like the Jupiter Bass 600 from Universal Acoustics, come in. These are designed to sit in the corners of a room, where they help to prevent low frequencies building up and contributing to a misleading bass response. The Jupiter Bass 600 traps are sold in packs of four, and come in charcoal, burgundy or purple.

The US-made Mondo Traps are designed to offer effective bass trapping while still being relatively compact. They are made from 10cm-thick panels of fibreglass, covered in fabric and mounted in a metal frame. They can be wall mounted, or positioned using an optional floor stand.