Q. What acoustic foam should I use in a vocal booth? 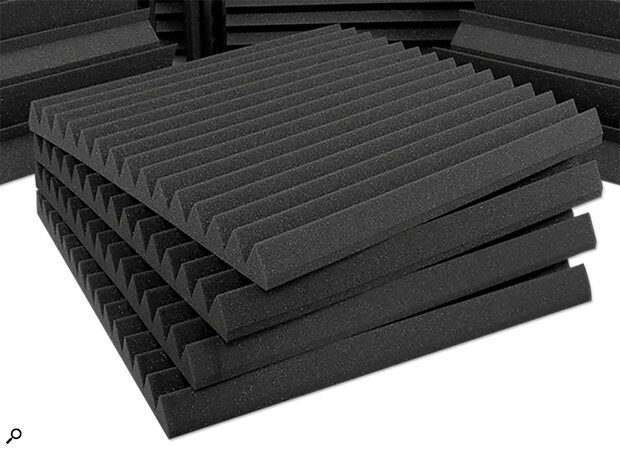 The walls of professional studio booths are much thicker than they appear from the inside. While acoustic foam can stop high frequencies bouncing around a room, even four‑inch foam only absorbs down to around 1kHz, so it tends to create an unhelpful ‘reverb mismatch’ between high and low frequencies in a booth.

I’m trying to figure out the best acoustic setup for a small ready‑made vocal booth, with a floor area measuring 4 x 5 feet with a 7‑foot ceiling. Some advice I’ve received is to cover every bit of the interior with four‑inch acoustic foam, while others recommend two‑inch foam — they tell me that the thicker foam will result in a completely dead sound, such that I would have to add reverb in post‑production, and that it’s better to not have that completely dead sound to begin with, hence their recommendation of thinner foam! What would you suggest?

SOS Technical Editor Hugh Robjohns replies: I’m afraid there isn’t a simple answer to this one, as everything depends on the physical construction of the booth. The problem you’re trying to solve here is that a vocal booth (and any acoustic space, really) has to have a fairly even ‘reverberation time’ across all frequencies. In practice, the low end can have a slightly longer reverb time than the high frequencies without sounding too odd, but it does need to be properly controlled. I’ve put ‘reverberation time’ in quotation marks because although that’s what the parameter is called (often denoted as RT60, or the time taken for a sound to decay in volume by 60dB) it is really a misnomer, since there will be no discernible ‘reverb’ as such in a room of this size. The decay time is way too short to perceive it as ‘reverb’ so what we’re really talking about is just first (or early) reflections. In a vocal booth, you don’t normally want much reflected sound at all, but what sound is being reflected needs to have roughly the same strength and similar decay times at all frequencies.

Now, two‑inch foam is pretty good at soaking up frequencies above about 2 or 3 kHz, and stopping this sound from bouncing around in the room, but it won’t do anything useful for sound waves at lower frequencies. Four‑inch foam will be effective for frequencies above about 1kHz (there’s a relationship between the depth of foam and the wavelengths of the sound waves it can absorb efficiently). However, the midrange and low frequencies — note that voices have fundamentals down to around 100Hz or even lower — will not be absorbed by the foam at all and so will just bounce around inside that small vocal booth. This is a very common problem which afflicts not only the vast majority of DIY booths that I’ve seen, but a good few professional free‑standing booths too! The result is a very boomy and boxy‑sounding acoustic space: very dead at the high end; boomy, resonant and uncontrolled through the low and midrange.

...two‑inch foam is pretty good at soaking up frequencies above about 2 or 3 kHz, and stopping this sound from bouncing around in the room, but it won’t do anything useful for sound waves at lower frequencies.

So, if simple foam panels aren’t going to sort out the spectral balance of the sound, what will? I’m afraid the answer to that is mostly the physical construction of the booth itself and whether the walls (and ceiling) are built in such a way that they serve as effective bass trapping? Hence my opening comment about it all depending on the construction...

I suspect the comments about booths sounding ‘too dead’ relate to the fact that it is incredibly easy to overdamp (absorb) all the mid and high frequencies with foam panels. That can create quite an oppressive and uncomfortable environment, especially in a compact booth. So often what people then do is try and add in some reflective surfaces in a subconscious effort to restore some spectral balance of the reverberation time across low, mid and high frequencies — but instead of curtailing the low‑end RT60, they’re actually just extending the high‑frequency decay time to match it, and they end up sounding like they’re recording in a bathroom!

If you look at the floor plans of vocal booths in professional studios, the working space inside the booth might be fairly small but the actual room is considerably bigger — maybe 12‑inches or more on each wall, to accommodate the depth of effective bass trapping needed to achieve a well‑balanced tonality. Whereas the structural walls of a professional studio’s booth are probably brick or concrete, a standalone booth of the type you’re considering can be built with semi‑flexible walls, which can act as bass traps to some degree, and thus absorb some low‑frequency sound energy. And that’s why, to answer your question, you need to know the acoustic properties of the booth itself.

Once you know how well the booth construction can control the low and mid frequencies, you can make an informed decision as to how much, and how thick, the foam panels need to be to provide a balanced absorption of high frequencies. So really, you’ll need to have a discussion with the supplier.