Q. What mic polar pattern is best for recording speech? 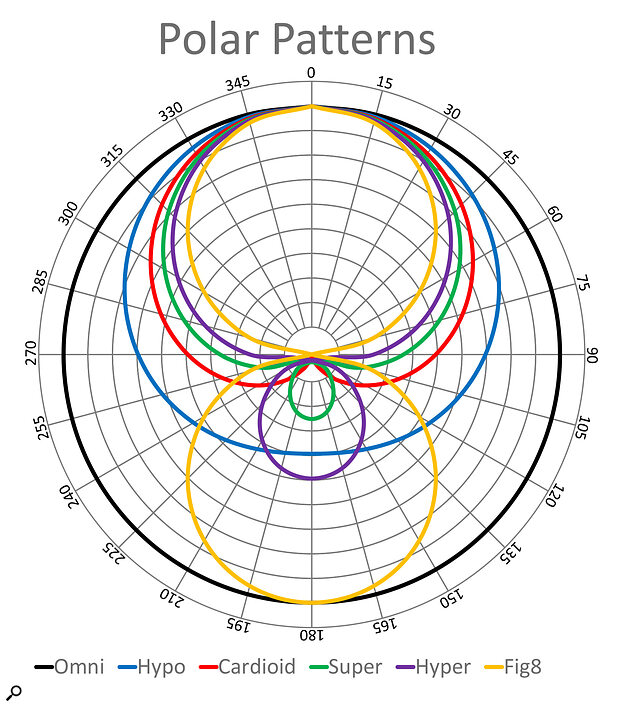 The various microphone polar patterns: top (0 degrees) is the pickup in front of the diaphragm, and bottom (180 degrees) to the rear.

I’m trying to improve the sound of my speech recordings which can be a bit ‘echoey’. I’ve been using a Rode NTG4 shotgun mic, but I’m thinking of switching to something more conventional and impulsively I’m drawn towards a super or hypercardioid model, although I am not entirely sure of their differences. Can you offer any advice?

SOS Technical Editor Hugh Robjohns replies: As the physical and practical differences between these two types of microphone aren’t huge, the terms are often used interchangeably by both users and manufacturers. But there are actually specific definitions as to what makes a mic supercardioid or a hypercardioid and, fundamentally, the polar equations that define the shape of the polar patterns for these two mics are different.

For the mathematically minded, a supercardioid is defined as 0.37+0.63cosθ, whereas a hypercardioid is 0.25+0.75cosθ (for reference, a standard cardioid is 0.5+0.5cosθ). All first‑order directional microphones combine elements of pressure operation (omni pattern) and pressure‑gradient operation (fig‑8 pattern). Essentially, the first number in these equations defines the size of the pressure component, while the cosθ part relates to the size of the pressure‑gradient portion. So, from these equations, we can see that the hypercardioid has a stronger pressure‑gradient element and so is slightly closer to the fig‑8 pattern, while the supercardioid has a larger pressure component, making it slightly closer to the cardioid pattern.

There are specific definitions as to what makes a mic supercardioid or hypercardioid.

In practical terms, both hypercardioid and supercardioid mics are noticeably more directional than cardioids, and they both have small rear tails. They both have a stronger proximity effect, and are more susceptible to handling and wind noise. When used as a stage vocal mic, floor monitors should be pulled around to the sides, rather than directly behind, so that they aim into the null angle — bearing in mind that the optimum angles are slightly different for the super and hypercardioid. And while the hypercardioid has the highest directivity index, meaning it rejects ambient noise more than the supercardioid (or cardioid), it does have a strong rear lobe and will pick up more sound from directly behind than a supercardioid.The plot compares the polar responses of the full suite of first‑order mics (omni, hypo‑cardioid, cardioid, supercardioid, hypercardioid, and fig‑8), and hopefully this will help you visualise what I’ve said above.