The Mechanics Of Keyboards Explained

We look at the technology and terminology that underpins all keyboard instruments.

If you’ve any interest in keyboards you’ve probably heard a lot of talk about keybeds, action and various key types, but if you’re new to the subject then this terminology can be a little confusing. And as technology is constantly changing and improving it’s always good for the rest of us to have a catch‑up. We’ll do a quick breakdown of the main aspects of keyboard mechanics and also consider what to look at when purchasing a keyboard instrument.

The keybed is the platform that the keys themselves are built on to and it’s often completed separately and slid into place in the body of the instrument. The further up the range you go, the better quality the components and construction of a keybed.

Keybeds are often built onto a metal frame that the keys themselves sit in. The keys are either constructed from wood or plastic. In cheaper instruments, the return of a key can be quite noisy, so in more expensive instruments you’ll find that felt has been used in order to alleviate this problem by dampening the mechanism, which in turn gives a smoother feel when playing.

As plastics technology has improved units are becoming cheaper, although you may find that these less‑expensive instruments can potentially develop faults more quickly (ie. keys stop working) or they become very noisy and ‘clacky’ after a very short amount of use, so it’s something to bear in mind when making a purchase choice. 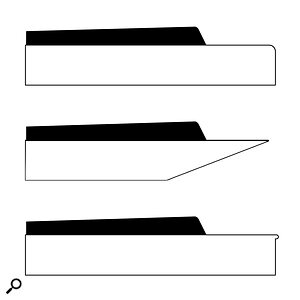 Types of key in profile. From top to bottom: waterfall key, synth or ‘diving board’ key, and piano or ‘lipped’ key.One thing you’ll notice is the different shape of keys and this will often give away which mechanism is being used in the keybed.

Waterfall Keys: Made famous by the Hammond B3, these thin, lightweight keys are also referred to as square‑front keys and are lightly sprung. If you’ve ever seen an organist sweep their hands up and down a keyboard (glissando) it’s because these types of keys make this movement easy. Trying this on other key types can be quite painful.

Synth Keys: Slightly heavier than waterfall keys and with no front section to the key, synth keys also use a sprung action mechanism. You’ll also find this type of keybed on home keyboards, although most synths will have a better quality mechanism and key finish.

Mini Keys: While most keys are the same width and depth as those on a piano or just slightly smaller, some keyboard manufacturers choose to create mini keys to create more compact instruments or to keep manufacturing and shipping costs down. While not as well received a full‑size keys, there are still some instruments available today with mini keys that are aimed at the pro market.

Piano Keys: These are usually solid keys, either made from plastic or with a wooden inner section with a much higher‑quality finish. These keys are usually weighted rather than sprung, something we’ll cover in more detail in the next section.

When we talk about keyboard action, we’re referring to the mechanism used in the keybed construction and the overall feel and quality of expression that this gives us.

If you think about a real piano, pressing a key activates a hammer that strikes a spring. There is a slight delay between the initial pressing of the key, the hammer striking the string and the hammer returning to its original position so that you can press it again. The mechanism that allows the hammer to quickly fall away from the string and return to its original position is referred to as ‘escapement’ and achieving this has been the holy grail for keyboard manufacturers. Good escapement in an acoustic piano is necessary for two reasons: to let the string actually vibrate to produce a sustained sound and to allow for the playing of faster pieces. On your own keyboard instrument try hitting the same key in quick succession to see how good the escapement is.

Keyboard instruments that are on the cheaper end of the scale or those not looking to emulate a piano, eg. organs and home keyboards, will have plastic keys and a sprung mechanism, so when you release a key, the spring returns it to its original position. If they’re not touch‑sensitive you get the same level of expression no matter how hard you strike a key. Those that do have touch sensitivity offer 128 steps of expressiveness, although how well this works depends on the overall quality of the keybed.

Lower‑end keyboards, controllers and digital pianos that are classed as semi‑weighted are also often sprung, although with slightly more resistance to simulate a heavier piano key feel. They may also benefit from the addition of counterweights which speeds up the return of the key to its original position and allows for better expression and faster performances.

Once you get into the midrange then you’re starting to look at wooden keys. Anyone who has played a real piano or who is a more experienced keyboardist will tell you how much your performance improves with wooden keys. While cheaper keyboards may offer touch‑sensitivity, having wooden keys allows for much more expressive, nuanced performances and it’s here that you’ll really start getting a fantastic lower‑end growl out of your bass notes. One of the reasons for this is the addition of graded hammer action. On a real piano you need slightly more effort when playing the thick bass strings than you do to play the thin, higher‑end notes. An entry‑level graded hammer action keyboard is divided into sections and each one weighted differently to further emulate real piano action.

Another factor that improves performance is the addition of two extra sensors to detect when a key is back in its original position, improving the escapement accuracy. If your goal is to work through the piano grades or generally become a better player then this is really the starting point that you should be looking at. Another step up from here is having individually graded keys plus a longer key stretching into the body of the instrument so that the fulcrum is shifted and you really are in counterweighted action territory rather than sprung. 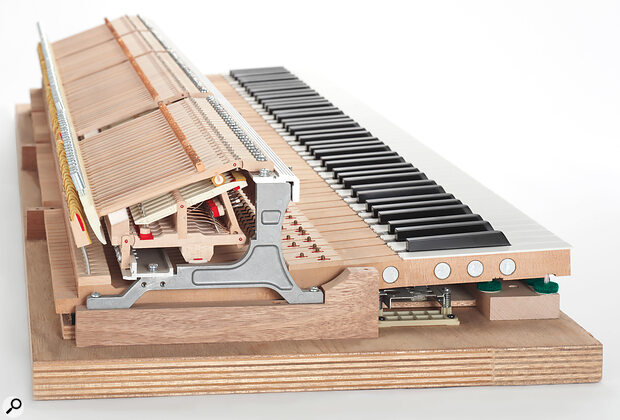 So moving on from here, how can it possibly get better? We need to look to the companies that create actual acoustic pianos for this level of technology. Yamaha (and now Kawaii) have achieved it with their Hybrid piano ranges. The Yamaha AvantGrand range was the first to incorporate an actual acoustic piano keybed into a digital instrument. A real hammer mechanism in a digital instrument was an amazing breakthrough — rather than striking keys, the hammer mechanism breaks a beam. They have three grand piano actions and one upright within the range. Or if you want the ultimate experience for your studio, the acoustic piano ranges from these two companies now have digital capabilities. You get the benefit of real strings but, for easier recording or practice, slide the foot mechanism to disengage the strings so that you can play internal samples or record a midi performance instead — the best of both worlds.

When you play a keyboard for an extended period of time moisture from your hands can make the keys slippery. On early acoustic pianos this was overcome by using ebony and ivory for absorption. On cheaper keyboards you’ll see that the surfaces of keys have a textured effect to prevent slipping. From midrange models upwards, manufacturers now use synthetic ivory and ebony surfaces, with the very top‑end digital pianos having the same high‑quality key finish as the acoustic piano ranges.

It really is a case of different keyboard instruments for different purposes. If you have a budget‑conscious, compact studio then you might want to stick with a cheaper controller, whereas a bigger studio may want the option of recording real piano strings but with the backup option of capturing a MIDI performance at the same time. If you’re out on the road regularly you may want a highly expressive midrange instrument while avoiding wooden keys in order to keep the weight down. Knowing the options available helps you to make an informed decision so that you can choose the right instrument for your own personal needs.