This classy stomp box is much more than a guitar effect, and it is equally impressive on stage and in the studio. 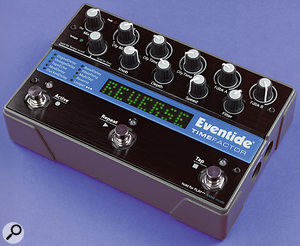 The Eventide name is well known when it comes to studio outboard effects, but perhaps less familiar to those who prefer to use stomp boxes for their sound mangling, so when I heard that they were launching a range of pedals, it was time to get excited.

There are currently two pedals in the range. The Mod Factor will offer a range of modulation effects, and is released imminently, while the Time Factor, reviewed here, provides an arsenal of delay effects, as well as a loop capture and playback facility.

The Time Factor is roughly the same size as a Boss twin pedal, though it is slightly longer (about 19cm) and slightly shallower from front to back (12cm). The use of three small-but-robust metal footswitches means there's plenty of space for the large 'billboard' display screen. There's also space for a status LED above each of the footswitches, and a red peak LED at the top left of the main panel. Above the screen are 11 rotary controls, the bottom-leftmost of which is a continuous rotary encoder for selecting the desired delay model. It also doubles up as a push-button to access the tap-tempo mode, and to save user presets. There's a wet/dry mix control, A/B channel mix, feedback and delay time controls for each of the two channels, plus Depth, Speed and Filter, and the mysteriously named 'Xnob', which I'll come on to later.

Also on the front panel are a further 10 LEDs, clearly labelled in white text on a blue background to show which of the 10 effects is selected. Eventide describe the delay models (Digital Delay, Vintage Delay, Tape Echo, Mod Delay, Ducked Delay, Band Delay, Filter Pong, Multi Tap and Reverse) as their 'nine best', and the Looper provides a 10th effect. You can scroll through the models using the rotary controller described earlier.

On the right-hand side of the pedal are MIDI In and Out/Thru ports, which allow you to control tempo from a remote MIDI source, and the remainder of the inputs and outputs are located on the rear. The two audio inputs are via mono quarter-inch jacks, and adjacent to these there's a small, metal toggle switch to select between guitar- and line-level inputs. The audio outputs are again on mono jacks, and another switch enables you to select the appropriate output level (line or amp). Sadly, there's no digital audio I/O, which would have aided integration into a studio environment.

Also on the rear is an expression pedal jack input, and a stereo jack input to accommodate an aux switch. The latter supports three independent memory switches using Tip, Ring and Tip+Ring, enabling direct control of features such as tap tempo and mode-switching. To the left of these, there's a USB port, which allows you to load updates from Eventide's web site via Mac or PC, and a power inlet for the included 9V DC PSU.

Three bypass modes are available: true analogue bypass, which is great for simple guitar-to-amp configurations, plus a DSP bypass which routes the signal through the processor but applies no effects, and a third option called DSP+DLY, which applies no new effects to the input, but doesn't cut off any ongoing effects tail when engaged.

There are two modes, Play and Bank, and you switch between them by holding down the right-hand footswitch ('Tap'). In Play mode, the current effect name is displayed on the screen, and the footswitches are used to control the effect. The left switch acts as a bypass, the centre one switched the infinite repeat function on and off, and that on the right controls tap tempo, or selects tempo values if the Tempo function isn't engaged.

The Time Factor's inputs and outputs are switchable between line and instrument level, and the aux switch and expression pedal inputs add to the versailtity.The Bank mode is used to save and access user patches, which are stored as 'banks' and 'presets'. There are 20 presets, organised in banks of two, and the current bank and preset numbers are displayed on the screen. Saving presets is easy: you hold down the rotary encoder until the bank and preset numbers are displayed, turn it to select the location, and press again to save. If 20 presets are limiting, you can back things up by MIDI SysEx, and if you don't want to scroll through all of them, you can limit the number that are available — very useful in a gigging situation.

There are plenty of loopers around now (see the 'Alternatives' box below), and I found the Eventide among the easier to use. You get up to a 12 seconds of loop memory in mono. Everything is done with the three buttons, with their functions indicated by small transport icons: round for record, triangle for play and square for stop. Depending what you're doing at at the time, these buttons do different things. For example, pressing the record button while already recording ends the first loop and starts overdubbing another. You also get control over the wet (loop playback) and dry signals. Again, this is all very clearly described in the manual, and in practice it is really easy to use, too.

I used the Time Factor on a guitar tracking session, substituting it for my Boss DD6, and was instantly impressed. In Play mode (the default mode) the basic controls were all very intuitive, and I was quickly able to dial up the basic delay settings that each track required. The rhythm section had been recorded without a click, and being able to dedicate a switch to tap tempo while leaving others to operate normally was refreshing (the lack of this facility on my other delay pedals has been a consistently source of frustration). Running straight into my amp, it gave out a healthy level and the sound of the digital delay was nice and clean. The same couldn't be said of the Vintage Delay, of course, but I mean that in a good way! I was able to get a very convincing tape delay sound, complete with the effect of speeding up and slowing down the tape where I wanted it.

Though for this session I stuck largely to the digital delay and the tape delay, I had opportunity to experiment with the various different models on guitar and other instruments. The modulation delay and reverse delay in particular appealed to me — particularly for live use, where the expression pedal input comes into its own — but I couldn't find fault with any of the others.

I also tried tracking direct to the desk when recording a synth part, switching the output level accordingly, and again it worked very well. I wasn't using an amp here, but found that I got better results using a dedicated amp and speaker emulation — and it would have been nice to see at least a basic one included in this design.

Back in the studio after the recording sessions I tried the pedal out on a mix as an external send effect in Cubase, where it seemed to perform very well. The ducked delay was a particularly nice effect on both guitar and vocals. The switchable input and output levels mean that it is much better suited than your average guitar pedal for studio work. It was also very refreshing to have so many knobs and dials to twiddle on a studio device — it is the kind of marriage of live versatility and studio quality that you dream of. One thing I've not mentioned is that you can use this pedal as a stereo, mono, or dual-mono effect. You're not able to load two different effects models simultaneously, but you can still run two separate delay lines with different delay and feedback settings, which I found really useful when mixing.

It sounds impressive, but should you buy it? If all you need is a guitar delay pedal or a looper, there are cheaper options. Also, for studio use, the lack of digital I/O may be a limitation for some people. The expression pedal and aux switch inputs, though, and the MIDI connectivity are a Godsend. There's enough hidden depth here to keep you exploring for some time, but you can also get good results very quickly. I'm inclined to agree with the boast on the box that "nothing sounds like an Eventide": the Time Factor is a sophisticated creature with a distinctive personality, and nothing else I know does quite what this pedal does quite as well. It is among the best delay pedals I've used, and is capable of competing with more expensive rackmount effects. I've hung on to this pedal longer than I should have: I'll be sad to see it go and can't wait to try the Mod Factor!

There are plenty of stereo delay pedal options out there at the moment that cover similar territory when it comes to delay effects — the Boss DD6, for example — and there are now plenty of very capable looping pedals out there, such as the Boss RC20. In fact, for the price of the Eventide you could get both these Boss pedals, though you'd still lack much of the Time Factor's functionality, including the expression pedal control. Line 6's DL4 is probably the closest competition, though it is less versatile, particularly in terms of hands-on control.

The Time Factor is a versatile dual delay pedal offering tap tempo, an aux switch input, expression pedal control over most parameters, and a 12-second mono loop recorder to boot. Updateable via USB, and with the option to select line or instrument-level inputs and outputs, and to sync to tempo via MIDI, it works well both on stage and in the studio.