Adding to a catalogue of quirky, usually multi-functional modules, the General CV is another surprise from Expert Sleepers. I mean, who’d have thought of putting a General MIDI synth into Eurorack format? Not only does the General CV contain a fully-fledged GM2 synth — 16 channels with effects — but it has a number of unique modes to extract that little bit extra from incoming voltages. 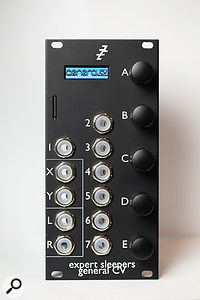 Size : 12HP. Current: +12V = 91mA, -12V = 27mA.Externally, the General CV has typical Expert Sleepers inscrutability, in the form of five encoders labelled A-E, and a total of nine inputs. Of the latter, inputs X and Y are digital and ideal for on/off type functions such as gates and triggering. Other than the left and right audio outputs, the remaining jacks are all regular CV inputs, referred to by number. These jacks are the fabulous ‘lighting up’ types as seen in other ES modules; they therefore serve as helpful (and colourful) status indicators. The module also features a display, which goes a long way towards removing any confusion with the input and encoder labelling — or it does if your eyesight can cope with the tiny text. Mine, it turns out, struggles and I therefore kept a magnifying glass close by. Fortunately, the text becomes slightly larger once you dig into the menu system and I later discovered that reducing the brightness helped clarify the tiny font too.

The menu system is easy to get around once you sort out the basics of navigation (using the encoders, which also act as buttons). The mode menu currently offers a selection of ways to convert incoming voltages into meaningful MIDI information. In its first entry, ‘CV to MIDI’ mode, the X input controls the gate and the Y input acts like a sustain pedal; the rest perform actions such as program selection (from the full General MIDI range), pitch, velocity, reverb amount and a couple of fun extras: Quantiser key and scale. In this mode, the encoders offer more functionality spread across a couple of pages, such as transposition, the setting of specific reverb or chorus amounts and the allocation of up to eight unison voices complete with detune. Using sustain, you can quickly build up chords in a manner rarely achievable in the Eurorack world.

After only a few minutes sequencing a grand piano, I had to sit down and take a quick reality check. These are not the kind of sounds I’m used to extracting from my modular and I wasn’t too sure how I should feel about them. I could, at least, introduce some comforting strangeness by harnessing those built-in scales.

The next mode — VCO mode — is similar but focussed on treating each GM source like a regular modular VCO. Although the X input can still gate the oscillator, it helps to think of this as supplying a continuous sound source in which all changes happen right away, as opposed to the previous mode where note triggering drives every change.

Moving on, the next two modes relate to the playing of MIDI files — files of type 0 or 1 that you can place on a MicroSD card. You first need to prepare a simple text file — a set list. Up to 32 of these are supported and each list can contain 32 possible files. The first mode involves clocked playback, so if your MIDI files include a load of drum loops, these can be synchronised to a modular clock. Hey presto: the General MIDI engine becomes a powerful source of grooves! Naturally you aren’t restricted to drums, but I must admit I was kept amused for several days combining the various GM kits with patterns created on Logic, or retrieved from collections dating back several decades!

You can use incoming CV to switch files, use the encoders to mute playback of specific channels and have way more fun than I personally had expected — and I’m a fun-expecting kinda guy. The second playback mode is unclocked, ie. it plays at the tempo stored in the file. However you can use incoming voltages at inputs 6 and 7 to vary the speed if necessary.

The next pair of modes are specific to drums and turn the General CV into a surprisingly capable drum synth, with five kits to choose from, each with a wide choice of drums. In the first mode you can trigger a single drum at a time, but switch drums using CV as well as dynamically controlling its velocity, reverb and chorus send amounts. Fun though this is, the next mode — Drums 9 mode — offers far more potential: the nine CV inputs each trigger a separate drum, chosen from the available kits. That’s pretty impressive in Eurorack terms. I connected the eight trigger outputs from my BeatStep Pro and grinned for the rest of the afternoon. True, you don’t get individual velocity control of each drum, but there’s a way to do that too, which we’ll look at shortly.

In the meantime, the two final modes are well worth trying out. The first is Chord mode: a cool way of generating instant chords, shifting their shape, picking different inversions and keys via the various CV inputs. Incidentally, as you can’t always remember how the inputs and encoders are assigned in each mode, it’s good that with a push of a couple of the encoders, the display provides a quick reminder.

Parameters are supplied to vary the envelope and filter settings for your chords, and break them up or layer up to four extra sounds over the primary patch. You’re given control over the level, pan and coarse tuning of the five possible layers. Needless to say, some seriously monster chords can be generated, all from a simple 1V/oct pitch input. Along similar lines, Arpeggio mode takes your chords and spreads them in various directions, ranges and clock divisions.

In other menus you can specify the reverb and chorus types, the effects also covering delay, flanger and phaser, plus there’s a separate EQ section. Given you can spend quite a while programming the module, it’s a relief that you can name and save up to 64 presets, archiving the collections to the MicroSD card.

Given Expert Sleepers’ track record in providing updates, I wouldn’t be at all surprised to see extra modes implemented as ideas and suggestions pour in. However, before finishing off, I should mention that the General CV is compatible with the ‘Disting Mk4 MIDI breakout’, a module designed to supply regular five-pin MIDI ports. Fit one of these and you have a fully-accessible GM synth in your modular case. And if your sequencer can send both CV and MIDI, you get multitimbrality and polyphonic playback alongside the module’s own modes. For example, I was able to sequence GM drum kits from the BeatStep Pro (with full velocity control of 16 drum voices) at the same time as using CV to drive the built-in chord or VCO mode.

Every now and again a module appears that slots into a niche you didn’t realise existed, but once it’s there you start to see all kinds of new possibilities. It’s ironic that a General MIDI module could accomplish this because, admittedly GM means grand pianos, bagpipes and everything that falls in between. However, deeply transposed bagpipes through a Morpheus filter are a proposition I’d never considered until recently. Now, I can’t get enough of them! My complaints are few and mostly related to my own fading eyesight and a preference for tighter jack sockets. The addition of MIDI might be viewed with suspicion by some but the idea of playing easily and reliably in tune might catch on, who knows? The General CV is perhaps the best use of General MIDI, ever.