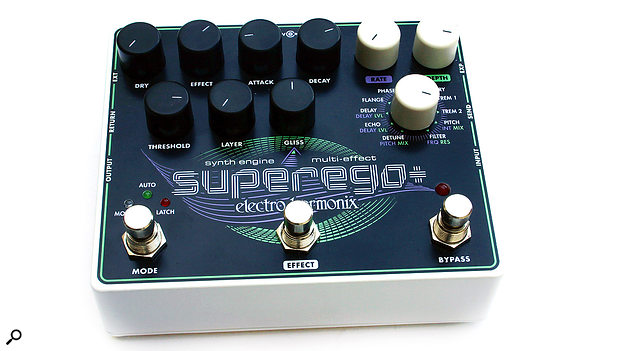 Pairing EHX’s impressive ‘freeze’ technology with a multi-effects processor opens up a world of creative possibilities.

The Electro-Harmonix (from hereon EHX) Superego+ is a sort of guitar synth, though not in the traditional hex-pickup sense of the term: by means of some seriously clever processing, it can create a range of polyphonic synth-like effects with nothing more than a conventional guitar signal as its source. And because it processes the guitar signal itself, it doesn’t suffer from any of the usual side-effects suffered by pitch-tracking guitar synths. Unlike the same company’s Synth-9 pedal, it doesn’t set out to emulate existing synth sounds but carves its own niche, although having said that, it can serve up a fairly convincing emulation of a Roland GR-300!

There are really two parts to the Superego+, the multi-effects section on the right and the sustain/synth section on the left. The latter allows notes to be held indefinitely, have their envelopes modified and have glissando applied for pitch glides. A TRS expression input allows for real-time effect parameter control using an expression pedal or 5V CV signal, and there’s a further TRS jack socket for an optional three-switch controller; the manual even shows you how to make your own if you are handy with a soldering iron! While the pedal can be used in stand-alone mode, the additional controller options open up a lot of additional possibilities, and I’d recommend at least hooking up an expression pedal.

Other than the power inlet, there are six jacks, two for in and out, two for a send/return loop and two TRS jacks for the external controllers. By default, the wet and dry signals share the same output but if you want to split them, the effects loop send can carry the synth-only signal, leaving the main output to carry only the dry signal. The Superego+ has a buffered bypass, and a 9.6V DC adaptor is included.

The effects section, which has its own bypass switch, has controls for Rate and Depth, and an 11-position switch selects between Detune, Delay, Echo, Flange, Phase, Mod, Rotary, Trem 1 (sine), Trem 2 (Square), Pitch (±1 octave in steps) and a resonant Filter. For those effects for which rate and depth are not applicable, the two knobs access different parameters, as denoted in purple and green text below the effect names. Most of the effects, which are all digital, are based on the sound of existing EHX products, so you pretty much know what to expect. Note that the filter stays where you set it unless a pedal is connected — there’s no filter envelope facility included.

Adding an optional expression pedal allows for pitch glides, rotary speed change, wah or multi-parameter morphs; you can store (for each effect) one set of up to seven parameters for the fully up position of the pedal and another for the fully down position, and moving the pedal morphs between them. The black knobs to the left address Dry level, Effect level, Attack, Decay, Threshold, Layer and Gliss. There are four foot-switchable Freeze modes: Moment, Sustain, Auto and Latch, plus the Live Effects mode. The effects are applied to the synth signal other than in Live Effects mode, where they affect the entire input and the synth section is bypassed.

Like the original Superego pedal, the sustain/synth part of the Superego+ has its roots in the EHX Freeze pedal, with which pressing a switch could provide infinite sustain by freezing the sound. How the Freeze part of the pedal responds depends on what’s displayed by the Mode foot switch status LEDs as you step through the options.

In Moment mode, the Superego+ freezes whatever is playing as soon as you press and hold down the Bypass footswitch. When you release the Bypass switch, the frozen signal fades out according the Decay setting. This way you can freeze a sound and then play over it using the dry and wet signal controls to set the balance.

With both the Moment and Auto LEDs lit, the Superego+ automatically freezes and holds notes as you play as long as Bypass is held down, with the Threshold knob setting the triggering sensitivity. Releasing Bypass again fades out the held sounds. If only Auto is lit, any notes you play are automatically frozen, and Bypass enables both the effect and held sounds to die at the rate set by the Decay knob. Holding down Bypass prevents more notes being frozen, and tapping it twice puts the pedal into bypass mode.

In Latch mode, sounds are frozen once you press the Bypass footswitch and they continue until you hit Bypass again (fading out according to the Decay knob setting) to freeze a new note or chord. This is a useful mode, as it allows you to freeze chordal pads without having to keep your foot on a switch. Again, two taps are required to put the pedal into bypass mode.

Live Effects mode is indicated by all three LEDs remaining lit. In this mode the dry signal is routed through the effects section, enabling the unit to operate as a multi-effects unit without the synth section. The send/return loop comes after the effects section in this mode.

Expression pedal up/down snapshots can be saved as defaults for each of the 11 effects — this overwrites the factory settings. To do this, you follow a simple switch and LED routine that’s explained in the manual. By default, the effects LED shows green, but it switches to red when the selected effect is a user setting.

The control jack input works with third-party three-button switches including the DigiTech FS3X. The switch functions are a little different from those of the switches on the pedal itself, and you’ll need to read the manual to understand this properly. Feeding a control voltage into this input allows you to create rhythmic bypass effects.

Impressive though the Freeze effect is, the ability to modify it using the effects — which I have to say are really good in their own right — really changes its character. Sounds vary from a slowly-phased synth pad to pseudo strings and organ-like drones with a rotary speaker added. Blending in a sub-octave also produces a very viable cello sound.

An expression pedal provides smooth whammy-style pitch glides, while the Gliss effects add automatic pitch slurring between notes, much in the style of an analogue synth. Used live, the pedal is guaranteed to have both the audience and other musicians wondering exactly what is going on, and in the studio, where you have more chance to finesse the sounds using additional processing, it could easily inspire you to take your experiments in different directions. Unless you stick to Auto mode, though, you can end up spending a lot of time operating foot switches so playing while seated might be a good idea.

The closest alternatives come from Electro-Harmonix themselves. Combining an original Superego pedal with separate effects pedals will get you close. The Synth 9 is also a good option for those wanting more recognisable synth sounds. The fully programmable, but more costly Boss SY-300 also overlaps in some areas.

The effects alone are worth the ticket price, but if you’re into more experimental musical styles, the synth/freeze section is pure gold.