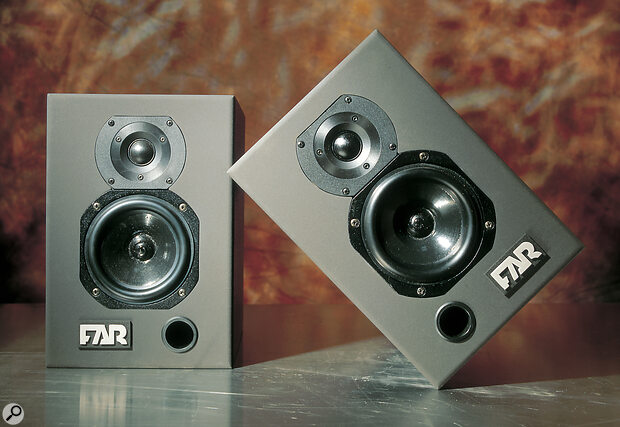 Combining your monitoring and amplification requirements into one portable enclosure has obvious benefits. Christopher Holder has a double date with a couple of sophisticated little performers.

Belgium, the home of bureaucracy and chocolate, the home of bureaucratic chocolatiers, and chocolate bureaucrats... the home of Fundamental Acoustic Research (FAR). The founding father of FAR, um...the FARther, Pierre Thomas, has been making studio monitors for quite some time now, mostly taking care of main monitoring systems to order and gaining considerable respect on the continent in the process. Comparatively recently, Pierre has taken to supplying for the mass market, building some solid, well‑crafted nearfields, as well as larger models offering comparable performance to the big‑name brands, without the big‑name price tag.

The Power & The Story

Powered and active nearfields are becoming rather fashionable these days. I don't mean 'Paris catwalk' fashionable (although I'm sure Vivienne Westwood would find a suitably perverted and recherché use for a pair) but more and more manufacturers are seeing the advantages of offering the option. The benefits include the portability of integrating the amp and speaker, as well as eliminating the sonic degradation of the amp running long speaker cables. FAR have initially decided to go for the more unsophisticated powered monitor option (which essentially involves tacking an amp on to the back of a speaker), and work on the more complicated active option (involving an active crossover, two amplifiers optimised for the two drivers, and normally considerably more money) later.

So what FAR have done is take an existing CR10 monitor and bolt a 50W monobloc amplifier onto the back of the box. There are inputs for a balanced XLR or an unbalanced jack plug, and also around at the back is a rotary volume pot and an on/off switch (although it bewilders me why these controls are not on the front, to save you from the 'reach around, grope and hope' situation). Bolting on an amplifier in this manner makes for a deep cabinet, and with the IEC power socket pointing directly outwards you may find the cabinets closer to the wall than you'd ideally like. I know that other manufacturers have the IEC socket pointing downwards, to make the arrangement a little more streamlined, and the CR10A would benefit from this tweak.

FAR have been good enough to supply me with more graphs, measurements and specifications than you could shake a B&K 4133 test mic at. The ducted‑port cabinet is a foot high, about as deep, and 21.5 centimetres wide. At some 10kg apiece, the CR10A cabinets have the same sort of weight and dimensions (and, in the case of the review pair, the same colour) as a breeze block. But that's where the analogy ends — I am in no way advocating the use of a breeze block for your nearfield monitor requirements, although a lorry of CR10A cabs would make for an interesting Wimpey home.

Looking at the performance statistics, FAR quote a sensitivity of 92dB @ 1W/1m, and a maximum pressure level for the two cabinets of 115dB @ 1m. The frequency range is noted at 45‑23000Hz ±3dB, which really does seem quite extraordinary given the 5‑inch woofer and small dimensions of the box. The power amplifier statistics show 50W of available power at 8Ω, and a signal‑to‑noise ratio of >100dB.

That's the statistics, but nothing can take the place of a darn good workout in the studio.

In practice, I think my first reaction is in response to the tremendous bass extension. I demonstrated the CR10As to a colleague, who took one look at the small cabinets and then began nosing about for signs of a sub‑woofer, such was the low‑end response. But I have to point out that FAR haven't magically sold their souls in exchange for the ability to bend the immutable laws of physics — the bass response hasn't got the sheer volume that you'll encounter on larger size boxes. The response is decidedly punchy, with the impression of deep bass, which admittedly suits my nearfield preferences more than a separate sub — both configurations have their place, but the CR10As do it for me. Listening back to Vangelis' Bladerunner soundtrack, I felt the speakers dealt with the apocalyptic rumblings with considerable aplomb; likewise, the more percussive sub‑bass of Erykah Badu's rhythm section was reproduced without the slightest wobble. Very impressive.

There's a small bump in the frequency response around the 1k range and a slight notch around the crossover frequency of 2.5k, and it all contributes to a clear and seemingly neutral mid range. Vocals poke out just enough to be useful when monitoring, and rhythm parts maintain real clarity.

Further up the frequency spectrum, the soft‑dome tweeter's output gradually lifts all the way above 20kHz. The result isn't entirely unpleasing, if you can decipher that particular double negative. If I don't sound entirely convinced it's because I'm not. The CR10As don't have the American West Coast razor‑sharp highs or the more musical restraint characterised by the better British monitor designs; they seem to fall somewhere in between, with the high range having a tendency to be a little harsh when pushed, but not offering a transparent and artificial clarity characteristic of the likes of the (US‑made) KRK equivalents.

I monitored on the CR10As for days on end at relatively high levels and can complain of very little listening fatigue. In terms of level, the CR10As report a maximum pressure level of 115dbSPL @ 1m for the combination of the two cabinets, which is plenty of level for any sane engineer. In practice, I found myself turning the level pots on the speakers all the way to the maximum volume and bringing the L&R faders on the desk up towards unity gain to achieve the sort of high SPL to which I sometimes subject myself. In short, there's enough welly to mix loudly without any significant distortion but not with heaps in reserve. I think that with the qualities of these loudspeakers (particularly their bass extension) it's easy to forget the constraints of their actual dimensions — ie. they're bloody loud for their size.

These nearfields are instantly likeable. From the first moment you take a listen there's an effortless, natural character about them that makes you feel at ease. It takes next to no time to get accustomed to the CR10As — you'll quickly find yourself mastering with smug assurance, and in turn these monitors will reward you with mixes that will sound equally at home on your hi‑fi speakers, in your car and on your uncle's 25‑year old PYE music centre. They haven't got the sort of detail that sends shivers down your spine, and I've also heard slightly better stereo imaging, but the size, the convenience of being self‑contained, the bass extension and the mid‑range clarity all add up to a highly desirable nearfield monitor. If you're in the market, put these on your list of 'must hears'.

Amongst others, Spendor and KRK offer powered monitors in their ranges. There are plenty of active monitors out there as well. For instance, take a look at Genelec's 1029 nearfields, the Spirit Absolute 4Ps, or the new Mackie active monitors. FAR are also producing a powered version of their larger CR20 nearfields, but in the meantime, stay tuned for our FAR AV5 active monitor review in coming months.

These monitors are easy to love. Natural sounding and pleasing to the ear, yet transparent and revealing enough to entrust any mix with. Of course it comes down to personal preference, but these monitors are well worth serious consideration.