Don't be fooled by its diminutive dimensions: this powered monitor from Italian company FBT punches way above its weight.

Achieving the best possible overall performance from a live sound system is the goal to which we surely all aspire, but it's often easy to forget just how important a part the quality of the stage‑monitor system plays. I think I have changed my main speakers two or three times over the past few years, and I have various rigs available for different occasions, but I have stuck with the same monitors throughout and never regarded them as very high up on my 'things to buy' list. So how tempting would it be to spend a while in the company of a hot little Italian job?

The StageMaxx 12MA is a self‑powered 12‑inch stage monitor with a gas‑injected, bass‑reflex polypropylene shell. My first visual impressions were of a very compact, extremely low‑profile design with a smooth, up‑to‑date curvy look that is about as unobtrusive as you can get — none of your chunky black carpeted rock & roll boxes here.

The 12MA is a bi‑amplified unit, with 400W and 100W Class‑D amplifiers (continuous ratings are 350W and 80W respectively). Crossed over at 1.8kHz, the 400W amp powers a custom‑designed 12‑inch‑diameter, 2.5‑inch voice coil B&C driver, with the 100W amp feeding a one‑inch‑exit, 1.7‑inch diaphragm B&C compression driver. The drivers are arranged in a coaxial format, which significantly reduces the frontal baffle area required, thus contributing to the compact cabinet dimensions. A switch‑mode power supply helps to keep the overall weight down to under 30lb or slightly over 13kg — however you measure it that's an easy thing to lift. The acoustic output figures are given as 124dB continuous and 130dB peak, which I assume are standard on‑axis measurements taken at one metre.

The connectors and controls are housed on a single panel, which is deeply recessed into one side of the unit. This houses the single balanced XLR input and link‑through XLR output (with a switchable low‑cut filter) for daisy‑chaining to another monitor. The input level control has a printed scale from ‑∞ (off) to +6dB, with a zero centre point. Thankfully, the control knob has a stripe on its end button so you can see easily where it is set. A four‑way rotary selector offers DSP performance presets, which are factory‑set and not user‑adjustable. This sound shaping is quite subtle, and it's definitely worth spending some time using these in different situations to get the best results. The first two EQ presets are named 'original', which is the basic general‑purpose floor‑monitor setting; and 'FOH', which produces a somewhat fuller sound with a bit more bottom end, and is intended for when the StageMaxx 12MA is to be used as a full‑range speaker on a bracket or pole. 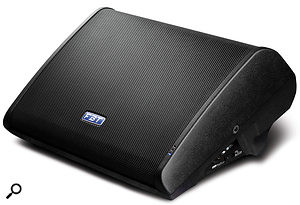 The other two settings introduce high‑cut and low‑cut EQ. All the presets are effective and offer performance choices, and I noted that when switching between settings the changes are under the control of the DSP, and not instant, as you'd get with a mechanical switch, so a short wait for the system to adjust itself is necessary before the new EQ curves are properly heard.

In the top left‑hand corner of the control panel there are three dots, which represent the three LEDs on the top/front panel. At first glance these look as if they are the LEDs themselves, but it's actually a printed chart telling you what the real LED functions are: power on, input signal/peak, and a protection/limiting indication.

Finally, there's a mains input connector (and link output), which is actually worth a mention as the mains lead plug is an unusual Powercon-type NAC3FX. This is a Neutrik True1 Powercon connector, easily identified by its black and yellow colouring, and the more common blue Powercon plugs will not fit it. This is because the True1 series connectors are CBC (Circuit Breaking Capacity) types designed to break at rated current — in other words turning the plug acts as the StageMaxx 12MA's on/off switch, which of course must be rated to operate under full‑load conditions — even though we would normally never dream of switching off a power amp without turning the levels down first! I noticed that the user manual shows a picture of a 'normal' IEC connector, so it may be that the StageMaxx 12MA is supplied in different configurations for different regions. A real top score goes to whoever specified the length of the power cable that ships with the monitor, as it's about 12-feet long — exactly what you need for a powered stage monitor.

I set up the StageMaxx 12MA in the studio and played some of my favourite CDs through it just to get used to its sound, and right from the start I was very impressed with what I heard. When describing the performance of live‑sound equipment I try very hard to avoid using the word 'punchy', but I really can't think of a better one to describe the initial impact this unit makes. It's extremely loud and clear, tight and crisp, with far more low‑end output than is reasonable to expect from a thing this size. What's more, the overall balance is maintained when working it hard, and it remains clean‑sounding and pleasant on the ears. To check the operation of the warning LEDs I ran a hot signal into 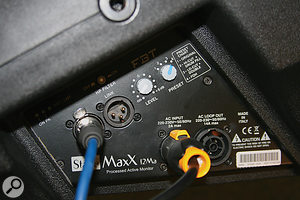 The recessed control panel houses all the audio and power inputs and outputs, as well as the input sensitivity control and four‑way EQ preset selector. the StageMaxx 12MA and turned it up until I got a red light. However it wasn't the 'peak' signal LED, but the protection/limit LED that came on first, presumably because these are monitored at different parts of the signal path, and it's possible to drive the output stage a bit too hard even before clipping the front‑end A‑D stage. I have to say that making any kind of warning LED light up involved the StageMaxx 12MA producing far more output than I've ever needed on stage, and given the conservative specifications, this is impressive.

When using the StageMaxx 12MA as a vocal monitor it delivered loads of very clean intelligible output, and the coaxial driver format means that the sound balance is uniform no matter where you stand — and this would pay extra dividends when using these in multiples.

I mentioned before that the EQ presets are subtle and don't instantly change the output, so it's not possible to flick between them and instantly hear the difference. This is probably a good thing, as it forces you to listen properly to what's coming out in context. As with all audio choices, different situations and different ears will decide which preset works best at any particular time, but after trying them all I tended to just run it in 'original' mode.

I took the StageMaxx 12MA along to a couple of venues, used it in rehearsal, and I also used it for a local choir concert as a piano monitor with excellent results — partnering this with a Yamaha stage piano resulted in a lovely rich, full sound, and as space was tight I was able to hide the monitor right beneath the keyboard. If I owned one (or more!) of these it would definitely be my go‑to keyboard amp/monitor, no doubt about that.

Portable live‑sound gear should, in my view, be just that: portable. The icing on the StageMaxx 12MA cake is its sheer carry‑ability and versatility. It can sit at an angle of either 35 or 55 degrees from the horizontal, which makes it good for standing over or aiming upstage, and the combination of light weight and generous, effective integral handles on three sides makes it easy to pick up and carry. The slightly convex grille is very strong and slightly recessed into the surrounding moulding, and although the StageMaxx 12MA doesn't strike me as the sort of monitor guitarists would put their foot on whilst soloing (they'd look a bit silly as it's under a foot high), it should certainly cope with some robust handling.

I've been using the StageMaxx 12MA for a little while, and I've grown extremely fond of it. It sounds great, looks the business, and I can't think of any gig I've ever done where I wouldn't have used it. I'm sure they're coming to take it away soon, but I might contrive to be away that day...

A powerful and portable coaxial speaker that should be able to handle just about anything you throw at it.