At the 2013 Frankfurt Musikmesse, Finnish manufacturers Genelec announced the impending arrival of their latest monitors, the M Series. Designed primarily for musicians and engineers working on location, in project studios and home studios, the new line featured a host of newly developed components, including the loudspeakers' Natural Composite Enclosure (NCE).

This injection-mouldable, environmentally friendly and fully recyclable wood-fibre-reinforced plastic composite allows Genelec to optimise the shape, rigidity and internal volume of the speakers to maximise their acoustic performance. 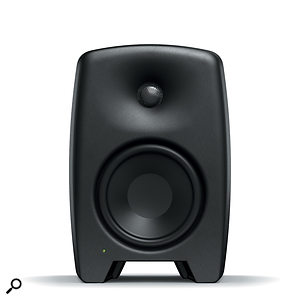 The M030 (reviewed in the August 2013 issue of Sound On Sound) was the first to come to market, and this has now been joined by the larger, more powerful M040.

The M040 is physically almost 25 percent bigger than its smaller sibling, and some 61 percent heavier. On top of the increase in cabinet size, part of the weight increase will no doubt be due to the larger transducers, as the M040 is fitted with a 6.5-inch bass driver and a one-inch treble driver (both new designs), compared to the five-inch bass and 0.75-inch treble of the M030.

The increase in driver dimensions also means that the M040 carries more powerful amplification: 80W for the bass and 50W for the treble, rather than the M030's 50W and 30W. Both monitors are powered by Genelec-designed, switch-mode Class-D amplifiers, which means that their frequency ranges are curtailed at the top end by the inherent limitations of this technology. Interestingly, the -3dB point of the M040 is quoted as 20kHz, whereas the M030 scales the dizzier height of 21kHz. Down in the bass, the 6.5-inch driver gives the M040 its -3dB point at 48Hz; around a third of an octave below the 58Hz of the M030.

The larger driver dimensions have moved the crossover point on the M040 down to 2.5kHz from the M030's 3kHz, whilst the more powerful amplification has increased the maximum SPL obtainable from a pair to 107dB from 103dB.

The rear panel connector and control layout is consistent across the M Series, and so the M040 is identical to the M030 in this regard. The audio input comes courtesy of a balanced XLR/TRS 'combi' connector and an unbalanced RCA phono plug. Although the M Series eschews a volume control per se, a three-way level switch brings in 0, -10 and -20 dB of attenuation, enabling you to match the input sensitivity of the M040 to the output level of your source to give you your desired monitoring 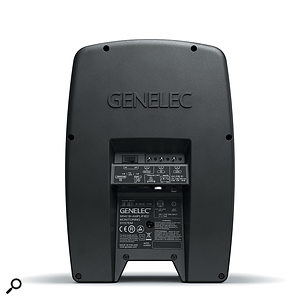 The back panel houses the balanced and unbalanced input connections, as well as a set of controls for tailoring the response to room placement and personal preference. level and volume control resolution.

To cope with varying room positions, a second three-position bass-level switch brings in low frequency reductions of 0, -2 and -4 dB, allowing for positioning in free space, against a wall or in a corner.

A final switch allows for either an additional attenuation of 2dB between 50 and 200 Hz, to cope with a really boomy loudspeaker placement, or the 'Tabletop EQ' option, which introduces a -3dB notch centred on 230Hz, to help reduce the low-mid coloration from the reflections that can occur when a loudspeaker is placed on a table or on a mixing console.

The power supply options are again the same as those found on the M030: automatic mains voltage selection from 100-230V coupled with Genelec's ISS (Intelligent Signal Sensing) system, which powers down the M040 after a period of input inactivity and brings it back up in under two seconds when the signal returns.

As always, I ran the M040 pair for around 24 hours in order to wake them up before listening to them in anger. To my ears, all Genelec monitors share the same overall performance characteristics — an absence of distortion even at high SPL, a presentation that feels very slightly forward, and a neutrally balanced sound field that has real precision, breadth and depth (although, as with all monitors, placement and setup are key).

As on the M030, the vertical and horizontal acoustic axes of the M040 run through a central point just below the bottom of the treble driver waveguide, and this should be pointing at your ear level, with the left and right speakers positioned 30 degrees either side of centre and toed-in tangentially towards you for optimum stereo image and sound stage. Having done that, and having set the input level to suit my DAC and passive level controller, I set about the EQ switches. Since the loudspeaker positioning in my listening room is in free space I didn't have any need for EQ, however later experiments with corner, wall and tabletop positioning proved the effectiveness of the chosen parameters and values.

Fed with the usual wide variety of music that I like to listen to — which ranges from Deadmou5 and CoH at one extreme to solo violin and a capella music at the other — the M040 turned in an extremely impressive performance across all the various genres. The bass performance really caught my ear, and it seemed to me that the increased bass-driver diameter and amplifier power really worked well with the port moulded into the interior of the M040 cabinet. Kick drums and other low-frequency transients were reproduced quickly and precisely, with a solid, uncompressed bass that never seemed to lose its sense of pitch or instrument separation. Although the M040 couldn't really match my main monitors in terms of moving air around, the amount of level and information available in the bottom end gave me confidence that decisions made on the M040 would translate well to larger systems.

Across the breadth of the frequency spectrum the M040 was, to me, the quintessential Genelec active monitor. Dynamics were delivered with clear precision and this, together with the precise delineation of information, made thorough analysis of both high-level and low-level details a rewarding task. The mid-range reproduction was not only precise, but also open and natural-sounding with no discernable anomalies around the 2.5kHz crossover point. The bass and mid-range performance combined with the detail available in the higher frequencies delivered a stereo image with a solid centre, precise positioning and a real sense of space and depth, which the M040 holds firmly in place.

The timing and integration between bass and treble was exemplary, with the treble never sounding displaced or disconnected from the bass. Overall, there's really nothing that I could fault in the way that the M040s delivered everything that I fed them with. In addition, the lack of distortion (even at high SPL) made the M040 untiring to listen to, even while I was concentrating hard on the inner details of a track or a mix.

The audio performance of the M040 proves to me the validity of Genelec's innovative, ecologically aware approach to cabinet construction. This, along with the other design and technological innovations and developments of the M Series, has enabled Genelec to produce an active monitor series that points to an influential new way forward.

For its intended use as a mid/high-end monitor for small project and home studios, the Genelec M040 seems, to me, to be right on the money. Not only is it an extremely capable studio monitor but it also could do double duty as a hi-fi speaker for those of us who want high levels of accuracy and detail when listening for pleasure.

Interfacing wasn't an issue, as the M040 happily connected to my laptop's headphone output, an unbalanced RCA phono feed from an external D-A, and balanced XLR's from a mixing console, all without any issues whatsoever. Although a bit more of a carry than the smaller M030, the M040 could also act as a very capable location recording monitor.

Then there is the M040's place in the extremely competitive active monitor market. Digital amplification, active crossovers, integrated DSP and off-shore manufacturing have brought price points tumbling downwards in recent years. It is personally extremely gratifying to see Genelec using innovation, technology and an environmentally friendly ethos rather than 'off-shoring' production in order to give engineers and musicians the opportunity to experience Genelec performance at a more wallet-friendly price.

I was extremely impressed by the Genelec M040, not only by its accuracy and by the level of detail that it enabled me to get into in the music, but also by its tight, fast dynamics and solid, uncompressed bass. If you are looking for a pair of small, high-quality monitors for your home or project studio at around this price, you really do need to give the Genelec M040 an audition. I'm going to be rather reluctant to send them back.

Around the M040's price point you'll find active monitor offerings from KRK, Dynaudio, Event, Adam, Neumann and Eve Audio, among others. All are well worth auditioning and all offer strong competition to the M040.

A high-performance active monitor with an ethos of environmental sustainability. The biocomposite cabinet, plus new amplification and driver designs, have enabled Genelec to deliver a high level of audio performance with true recyclability and a minimised carbon footprint. Highly recommended.