Innovation in synthesis is alive and well — and can whip up extraordinary sounds at the touch of a button.

One of the most memorable and distinctive soft synths I've encountered is Humanoid Sound Systems' Scanned Synth Pro, which I reviewed back in October 2007 (go to /sos/oct07/articles/scannedsynthpro.htm). SSP was the first attempt to commercialise a new technique called scanned synthesis, which can be thought of as a combination of physical modelling and wavetable synthesis. The modelling element comprises a virtual system of nodes connected by springs. This system itself does not directly model any sort of physical structure, and in fact, it can be configured in ways which would not be physically possible in our boring old three‑dimensional world.

Playing a note causes the entire system to be struck by a virtual 'hammer', setting the modes and springs in motion. Unlike in a physical model, however, this vibration is not translated directly into sound. Instead, the complex waveforms that are generated within the system of nodes and springs are 'scanned' and then treated as the base material for a variety of wavetable synthesis. Sounds are shaped using parameters that control such factors as the shape of the hammer and the force with which it strikes; the initial arrangement of nodes and their pattern of connection, and so on.

Scanned synthesis has many unique and pleasing qualities. It's possible to generate sounds of an incredible complexity and richness by manipulating a very small number of synthesis parameters. Almost everything it produces has a natural instability about it, meaning that scanned‑synthesis sounds are fluid, evolving beasts that can change wildly with pitch or velocity. And best of all, it excels at producing sounds that are extreme yet nevertheless highly usable: crunchy, atonal, sinister, but somehow organic rather than unreal and glassy.

The other side of the coin, at least as far as Scanned Synth Pro was concerned, is that scanned synthesis was wild and uncontrollable. Some settings would be barely audible, others would rip your speakers from their stands, with serious digital distortion never far away. Minor changes to an apparently unimportant parameter would completely alter the sound, while other parameters seemed to do nothing. Add to this a few bugs and a not entirely straightforward interface, and SSP could be inspirational and frustrating in equal measure.

Scanned Synth Pro is still available, and costs a bargain $24.99. However, Humanoid Sound Systems have now refined and extended the technology in a new soft synth called Enzyme. The basic principles of scanned synthesis remain the same, but in Enzyme they have been house‑trained and allied to further powerful features including frequency modulation, multiple oscillators, the ability to load your own samples, visual display of the waveforms being generated and an extraordinarily comprehensive system of parameter modulation.

Enzyme works as a VST or Audio Units plug‑in in 32‑ and 64‑bit hosts, and a stand‑alone version is also included. Its parameters are spread out over four generously sized pages. One contains the core synthesis parameters, one is devoted to the modulation matrix, a third to effects and filtering, while the Master page covers global parameters such as polyphony and portamento along with the assignment of Performance controls to parameters — of which more presently.

Visible from all four screens are three large buttons at the bottom left. Danger forces Enzyme to work with the "less sophisticated” signal path used by Scanned Synth Pro, while the Psycho button is a holdover from the earlier synth. If activated, it removes certain restraints that stop the arrangement of nodes and springs from flying to particularly distant extremes. In general, both buttons tend to make an Enzyme patch grittier, louder and generally rougher round the edges. 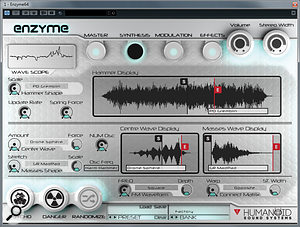 these buttons activates the random patch generator. This was a highlight of Scanned Synth Pro, and it's even better here. So good is it, in fact, that you really don't need to learn much about what the other parameters actually do, as you are never more than two or three presses of the Random button away from an inspirational sound. Unless you are either a programming ninja or a complete control freak, you'll find the Random button quickly becomes your main source of new sounds. The regularity with which it produces patches that are not only usable but truly excellent is most impressive!

The awesomeness of Enzyme's random patch generation does a lot to smooth the process of learning what all of its other parameters do. Once it has produced something you like — which, as long as you like all things dark, broken and eerie, won't take long — you can start tweaking other parameters to see what effect they have. This can still be a frustrating process, thanks in part to the sheer obscurity of scanned synthesis, but also to the fact that the Random button affects almost every parameter of the synth. In particular, although Enzyme parameters respond visually as well as audibly to MIDI controllers, they do not move in response to other forms of modulation. As a result, you quite often find that manual adjustment of a parameter doesn't have the effect you anticipate, because Enzyme has randomly assigned something like note pitch or velocity to the same parameter. Likewise, the random patch generation always serves up an equally random configuration of effects and filter settings, which often radically alter the base sound and sometimes render it completely silent. A bug whereby effects sometimes appear to be switched off when they're actually on doesn't help. The option to restrict the randomness to the core synth parameters, or to disable the effects altogether, would be nice.

Scanned synthesis begins with three initial waveforms. One determines the shape of the 'hammer', while the other two relate to the initial configuration of the node‑and‑spring system. All three can be chosen from drop‑down lists, and it's also possible to load your own samples, and choose start and end points within them. Under some circumstances, the resulting sound does take on a flavour of the sample, and using rhythmic loops can produce interesting effects, but in general, what you get out bears little to no resemblance to what you put in!

As well as the controls that govern the pattern of connexions between springs and nodes, the force with which the hammer strikes, the power of the springs to return the nodes to their initial positions, and so on, Enzyme adds some intriguing and powerful new features to the selection on offer in Scanned Synth Pro. The best of these, for me, is its ability to employ multiple oscillators. These can be set to a slightly detuned unison mode, recalling old‑school analogue polysynths, but they can also adopt a variety of configurations that are harmonically related to various system parameters. These are harder to explain than to try out, and really open up the palette of sounds that Enzyme is capable of generating. Best of all is that the number of oscillators, mysteriously, is not a discrete integer but a continuous parameter which can be modulated in real time. I don't know how that 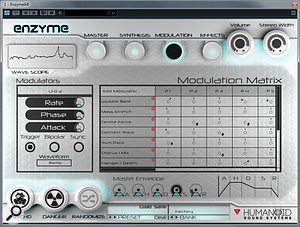 Enzyme's modulation matrix lets you modulate pretty much anything with anything else! works, either, but it sounds brilliant. Another addition is a simple frequency‑modulation section, which is always worth a punt on the rare occasion that an Enzyme patch isn't sounding sufficiently brutal and twisted.

Scanned synthesis is by its nature rather unpredictable and fluid, but to help things along, Enzyme sports one of the most comprehensive modulation matrices I've ever encountered. An unlimited variety of modulation sources is available, including the 16 Performance controls mentioned earlier, which are designed to be assigned to knobs on a hardware control surface. And any modulator can modulate an unlimited number of destinations, in any degree. One of the many charms of the random patch generator is that it always sets up some of the Performance controls to adjust multiple parameters simultaneously, and then gives the resulting tonal spread an evocative name such as Sadness or Hope. My one reservation about the mod matrix is that a lot of scrolling is required to view all of its connexions. In a relatively large plug‑in window, it would perhaps be possible to show more of it.

Finally, a word about the Effects page. This sports dual filters that can be set to most conceivable responses and run in parallel or series, plus a small list of insert effects that can be placed in series. The filters are definitely useful for taming the extremes of Enzyme's output, but in a synth that is otherwise highly individual, I was a little disappointed by the generic selection of insert effects: there's another filter, an extremely basic reverb, a delay, a simple distortion, chorus and a flanger. To my mind, Enzyme would benefit from some less predictable choices in this department. How about a waveshaper, for instance, or a frequency shifter?

I've been using Enzyme fairly intensively for weeks, and if I'm honest, I still have only the haziest idea how to program its core synthesis parameters. This really isn't the kind of instrument you can use to sculpt a sound you already hear in your head, or to mimic something from a recording. All too often, turning a knob or loading a new sample has no audible effect at all, and when it does have an effect, that effect is completely unpredictable. But you know what? It doesn't matter, because Enzyme is one of those products that has the happy knack of channelling serendipity. I've already built up a library of presets simply by hitting the Random button and making minor adjustments to the results, and very few of them are sounds I could have programmed by any other means, or in any other synthesizer.

In terms of broad sonic character, Enzyme has a richer and more controlled sound than Scanned Synth Pro, without losing any of its character. Like SSP, though, it is not an all‑rounder. It doesn't really do percussion sounds at all; nor, in general, is it much cop at imitative sounds or conventional subtractive synthesis, except that if your tastes in analogue synthesis lie towards the extremes, you'll certainly find some common ground here. For example, many of the leads and basses I churned out sounded distinctly reminiscent of the Polivoks, a synth which has never to my knowledge been successfully emulated by conventional analogue modelling. Frequently brutal and cutting, these sounds would surely work well in dubstep and other modern dance genres, but it's as a producer of textures and pads that Enzyme really shines. Anyone who's about to start scoring a sci‑fi or horror movie should run, not walk, to the Humanoid Sound Systems web site and download the demo. So, for that matter, should everyone else with an ear for the dark, broken, twisted and uncomfortable. Highly recommended and, at the price, a complete bargain.

If your interests lie anywhere towards the dark end of the sonic spectrum, and particularly in sound design, Enzyme will be an endless source of fresh ideas and great sounds.