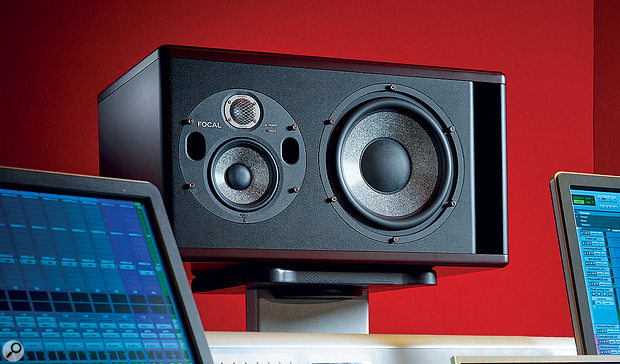 With the release of their new Trio11 Be three-way active reference studio monitor, Focal Professional have taken another step in a high-end monitor‑development journey that I think of as beginning back in 2013, with the launch of the SM9. That stunning monitor was the first to feature Focal's switchable two-way/three-way operation, alongside an auxiliary bass radiator. In 2015, the Trio6 Be arrived, becoming the first model in the company's well-established SM6 monitor line with two/three-way operation. The Trio6 Be also debuted a self-contained, ported assembly that housed the unit's mid‑range and treble drivers, and which could be rotated to allow for both portrait and landscape cabinet positions. Now, Focal Professional have launched the Trio11 Be, an SM6‑series loudspeaker of epic size and weight that is intended for operation in both nearfield and midfield positions. At first glance, the Trio11 (we'll take the Be suffix, denoting a beryllium tweeter, as read from here on in) looks much like a super‑sized version of the Trio6. However, Focal being Focal, appearances can be deceptive...

Physically, the Trio11 is close to being twice the size and weight of the Trio6; conversely, although approximately 33 percent larger in volume than the SM9, it is a mere 2.3kg heavier than its older stablemate. This slight differential is due both to the weight of the SM9's additional passive radiator, and that of its massive rear-panel heatsink, both of which are conspicuously absent in the Trio11.

The Trio11's heavily braced, foam-damped, front-ported MDF cabinet comes in the familiar Focal colour combination, and features red-stained side veneers of burl ash, rather than plain wood. The drivers are all front-mounted, with Focal's signature one-inch inverted‑dome beryllium tweeter (now protected by a new metal grille and voiced to compensate) sitting alongside an all-new five‑inch mid‑range driver mounted in the circular, ported, cab-within-a-cab module first seen in the Trio6. As in the Trio6, this module can be rotated through 90 degrees to allow the Trio11 to be positioned either vertically or horizontally whilst maintaining an ideal alignment with the listener. This module's front plate carries two bi-colour LEDs, one of which glows green when the monitor is active and red when the limiter is operating, whilst the other is green when the footswitchable two-way Focus mode has been engaged and red when heat protection has been activated. The reflex-ported 10‑inch woofer is another all-new unit, and it sits next to a rectangular port exit that has been made as large as possible in order to maintain a constant tonal balance at high SPLs and to reduce unwanted compression effects that might compromise bass‑frequency control and dynamics. The cones of both the mid‑range and bass drivers are constructed from Focal's proprietary 'W' composite, a material that combines light weight with damping and rigidity. 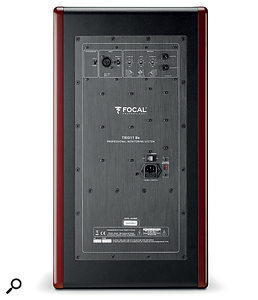 The rear panel houses controls for the integral three-band EQ, as well as the input XLR and a footswitch socket for engaging the two-way Focus mode.The Trio11's rear panel carries the balanced XLR input (switchable between +4dBu or -10dBu operation), a three-band EQ and the input and parallel output jack sockets for the Focus mode footswitch, plus a fused mains input connector, voltage selector and on/off and auto-standby switches. The EQ is designed strictly to aid integration into the Trio11's operating environment, and its three bands each offer adjustment of ±3dB across the Trio11's frequency bandwidth of 30Hz-40kHz (±3dB), with the shelving low‑frequency band acting over 35-250Hz, the peak response low‑mid frequency band centred on 160Hz with a Q of 1, and the shelving high‑frequency filter acting over 4.5-40 kHz.

One of the drivers (pardon the pun) behind the development of the Trio11 was the desire to offer a loudspeaker in the SM6 range capable of producing an SPL that would enable it to operate in both the nearfield and the midfield, to complement the primarily nearfield orientation of other members of that family. Focal are one of the very few studio monitor manufacturers who design, develop and manufacture their own proprietary drivers and so, unsurprisingly, achieving the required performance objectives involved the development of new mid‑range and bass drivers specifically for the Trio11.

For the five‑inch mid‑range driver, Focal deployed a Tuned Mass Damper (or TMD: see box) in the driver's surround, manifest here as two small circular rings that together oscillate in opposition to the resonant frequency of the driver surround. By utilising this TMD, Focal have been able not only to create an exponential cone profile that extends the driver's response to 5kHz, but also to use a very light surround and to damp resonances in the radial direction, ie. in the direction of sound propagation. Additional physical features include wide openings in the driver chassis, the coil and underneath the spider that are designed to minimise reflection and resonance and to maximise air movement in order to help reduce distortion. A compact, high-power neodymium motor drives the 'W' composite cone, which is able to maintain a piston action across its entire operational bandwidth since its break-up frequency lies well outside that range.

Although the mid‑range driver is isolated from the faceplate of the rotatable module by a rubber mounting ring, Focal engineers discovered that some vibration was being transmitted to it via its mounting screws. This discovery led to the development of 'Silent Blocks', which decouple the screws from the chassis, thus preventing the transmission of any vibrations or resonances from the cabinet to the loudspeaker. 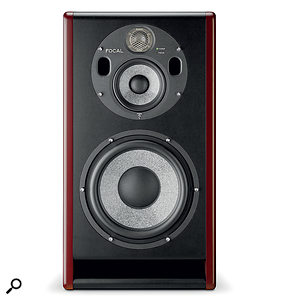 The mid and top drivers are housed in their own independent module, and can be rotated 90 degrees to allow for either landscape or portrait orientation.The new mid‑range and 10‑inch drivers both benefit from Focal's recent refinements in magnetic circuitry. In the mid‑range driver, Focal's patented Neutral Inductance Concept (NIC) technology is deployed in order to reduce eddy currents induced by the frequency-dependent current flowing through the voice coil. Combined with the TMD suspension and a Faraday ring positioned to reduce distortion below 1kHz, the result is high linearity in the 1-3 kHz region and an improved high‑frequency and transient response, coupled with very significant reductions in the resonance in the driver surround and non-linearities in the magnetic circuit, leading to a claimed 50 percent reduction in distortion around the 2kHz mark.

In the case of the woofer, a concentric Faraday ring placed at the base of its pole piece and having no contact with either that or the magnet was found to optimise the magnetic field in this new driver so that its inductance is now independent of both the position and current in the voice coil and of the frequency of the signal being reproduced. In conjunction with other mechanical refinements, Focal claim that this has resulted in reducing the overall harmonic and intermodulation distortion in the woofer by 70 percent.