Extinct Audio's excellent BM9 ribbon mic is now joined by a stereo version, and a ruggedised edition designed for loud sources. We put them to the test.

Stewart Tavener is probably the UK's leading specialist in restoring ribbon microphones, and launched Extinct Audio to bring to market his own designs. The first of these, reviewed in SOS April 2018, is the BM9 'Viking', a modern homage to the classic Bang & Olufsen BM3; and a very fine microphone it is, too! The BM9 has been a well-deserved hit, as the list of users on the Extinct Audio website will show, and Stewart has now followed it up with several new and related products. 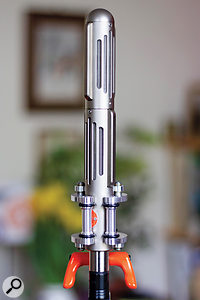 The stereo BMx2, in Extinct Audio's Fenrir shockmount.Photo: Adam WatsonAmong these launches are two new microphones derived from the BM9 design. These are the stereo BMx2 'Valkyr', designed for Blumlein and M-S recording, and the Black Ops, a ruggedised ribbon mic intended for close-up use in loud environments. Also new, and available as standard with the BMx2, is the impressive Fenrir standmount, while those of us who already own pairs of BM9s can now buy a plastic widget that allows two of them to be mated to form a stereo mic. As before, all of the important microphone components are hand-made in the United Kingdom, including the ribbon motors and transformers.

By creating a stereo version of the BM9, Stewart is following faithfully in B&O's footsteps. Many an orchestral recital was recorded back in the day with the original BM5 stereo mic, an icon of '60s design.

The B&O stereo mics had a couple of features that were supposed to make them more versatile: the mutual angle of the two capsules could be adjusted anywhere between zero and 180 degrees, and the top capsule was an optional extra, allowing you to buy a mono BM6 and convert it to a stereo BM5 when funds allowed. Sensibly, in my view, Stewart has fixed his capsules at a 90-degree angle. The option to vary this angle isn't often useful in practice, and brings with it potential for mechanical failure and user error. As on the mono BM9, he's also omitted the switches that are found on Bang & Olufsen mics, which are fragile and have no real use in the modern world. And, of course, the BMx2 also boasts the extended frequency response and relatively strong output level that characterise the BM9.

Whereas the BM9 ships in an attractive wooden box, the BMx2 is housed in a rigid plastic case that is less stylish but probably more practical. The microphone itself is protected by a fabric 'sock', and there are compartments within the case to house the Fenrir mount, the five-pin XLR cable and the small splitter box which derives two conventional three-pin XLR outputs from this. Like the BM9, the BMx2 is a passive microphone. The badge marks the front as it would be for M-S recording; for a Blumlein setup you need to rotate the mic 45 degrees relative to this in the correct direction, which isn't obvious.

Stewart calls the Fenrir a 'vibration mount', and it's an interesting product in its own right. Two semicircular 'jaws' are mounted on a swivel base. Once you've slid your microphone into the gap between the jaws, you tighten them by means of a thumbwheel on the back. The only actual contact between microphone and mount is made by eight black rubber discs that protrude from the arms, so your mic is both protected from scratches and given a degree of mechanical isolation. 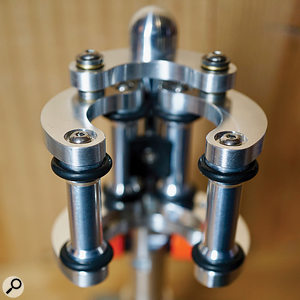 Rubber rings in the Fenrir mount provide a degree of mechanical isolation, and the mount allows for easy and sag-free repositioning of the mic in its possession.The Fenrir might be considered costly compared to generic mounts, but it's a beautifully engineered device that holds expensive microphones with a reassuring degree of security. In fact, it's less valuable for the relatively limited shock protection it provides, and more for the precision with which it allows long, thin microphones to be set up. Where you need to attach the support at one end, flexible mounts tend to sag or allow too much movement. The Fenrir solves this problem completely, making it possible to position mics quickly, accurately and permanently at any angle, whilst also permitting fast changes. It's not only useful for Extinct Audio mics, either; they don't say what the upper and lower limits on diameter are, but I think most smallish cylindrical mics would fit.

One mic that certainly fits in the Fenrir mount is the well-established Royer SF12 passive stereo ribbon mic. This also counts the Bang & Olufsen mics among its ancestors, and is probably the most obvious competitor for the BMx2. The SF12's slightly more compact dimensions and black coating might give it the edge in situations where mics need to be heard and not seen, but to all other practical purposes, the two can be used interchangeably. I made a number of recordings to compare the two, and found the BMx2 and SF12 are pretty well-matched in terms of sensitivity; I never needed to change preamp gain when switching between them.

As to their subjective sound, the main conclusion one can draw is that they are both very fine microphones indeed! I'd be very happy to use either of them in most circumstances, but they do have slightly different characters. The SF12 has a somewhat 'soft', airy sound by ribbon-mic standards, whereas the BMx2 tends more to foreground the mid-range, giving it more of a classic 'ribbon mic tone', if that means anything. Or, to put it another way, the BMx2 is the punchier of the two, and the SF12 slightly the more refined; but I can't imagine there are many situations where one would work and the other wouldn't.

As you'd expect with a well-designed ribbon mic, the figure-8 polar patterns seem very pure, with excellent rejection at the nulls. In one session I was engineering, the band decided they wanted to attempt a completely live recording with the singer in the room. I quickly grabbed the BMx2, which had been doing duty as a room mic, and repurposed it as a vocal mic, placed on an imaginary line between the guitar and bass amps. The lower element, facing towards the singer, gave me a remarkably spill-free vocal sound, while the upper element was still usable as a room mic, with virtually no vocal pickup.

The BMx2 is not modular like the Bang & Olufsen BM5, but if you want the same flexibility, Extinct's new stereo adaptor allows two BM9 microphones to be joined together, again at a fixed 90-degree angle. The resulting stereo mic sounds very similar to the BMx2, as you'd expect, so the main advantage of the latter is convenience. Joining two mono BM9s involves unscrewing the end caps from both mics and mounting them head-to-head; this takes time, and you then need to connect cables at both ends rather than using a single five-pin cable. The stereo adaptor is, apparently, also compatible with original B&O BM3 and BM4 mics, allowing them to be paired for the first time. (A similar but slightly more elegant approach is used in the Coles 4050, where the standmount also functions as the stereo adaptor.) 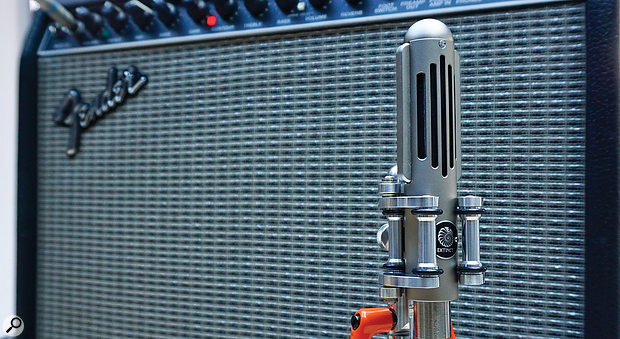 The Black Ops features a thicker ribbon than the 'normal' BM9, as well as extra screening, to help it to cope with loud sound sources.

The other new member of the BM9 family is the Black Ops, which is intended to boldly go where you wouldn't usually put a ribbon microphone: in front of loud amps, on stage, and as a close mic for the human voice. To this end, it uses 2.5µm-thick ribbon material in place of the 1.8µm ribbon found in the conventional BM9, with additional layers of screening, and a custom output transformer with an iron-rich core. This allows it to take a higher level without saturation, and introduces some low-frequency attenuation to compensate for the proximity boost you get when using a figure-8 mic close to the source.

Obviously, it's still a ribbon mic, and you wouldn't use it in a wind tunnel, but I took no special pains to protect the review specimen, and it handled everything I could throw at it. The BM9 Black Ops makes a great close mic not only on guitar amps but also on bass amps, where I'd probably hesitate to place anything too delicate. It's also an excellent vocal mic, particularly for those singers who always seem to sound thin, harsh or sibilant on capacitor mics. I think Stewart has judged the voicing very nicely: there's still enough proximity effect to bring a welcome heft to sources that need it, but not so much that close-miking things makes them sound boomy or unbalanced. Whether it's as robust as the Shure ribbon mics with their 'Roswellite' ribbon material I'm not sure, but if you treat it with the care appropriate to any £500+ microphone, it'll be fine.

When I reviewed the original BM9 microphones a year ago, I felt at home with them straight away. I bought the review pair and have used them on nearly every session I've done since; and if I had the money, I've no doubt I'd find the BMx2 and Black Ops equally indispensible. It's great to see a British manufacturer thriving and making products that are absolutely world-class, and I can't recommend Extinct Audio's mics highly enough.

Extinct Audio's range of high-quality, British-made ribbon mics and accessories grows, with the welcome addition of a stereo model and the 'go-anywhere' Black Ops variant.