Eventide's most powerful ever Harmonizer crams half a century of effects know‑how into a unit that's elegant, easy to use and — thanks to its upgradeability — completely futureproof.

The Eventide name has been revered in the recording studio world for as long as I can remember. The company started out in 1970 making auto-locators for Ampex multitrack tape recorders, but they first came to the attention of most musicians when they launched the Instant Phaser. This was back at the very beginnings of the digital audio revolution and, as with many contemporary companies, Eventide's early forays into ones and zeros were with variations on digital delay lines. In 1974 the brilliantly innovative H910 Harmonizer was an instant success, providing not only delays with modulation and feedback, but also playable pitch-shifting. The more powerful H949 Harmonizer that followed soon became a mainstay of high-end recording studios and broadcasters, and found its way into the stage racks of many well-heeled musicians. Harmonizers also featured heavily in the creative guitar sounds and effects on albums from the likes of AC/DC, David Bowie, Van Halen, Led Zeppelin, and many more. And they weren't limited to musical effects — for example, most of the alien/machine voice processing in the BBC's iconic 1978 radio comedy drama The Hitchhiker's Guide To The Galaxy was also courtesy of an H949.

Of course, the relentless progress in processor power and memory capacities has allowed each new generation of Harmonizer to be far more powerful than the last, and it's little surprise that the new flagship H9000 Harmonizer represents a substantial leap forward in this respect from the eight-channel H8000FW that appeared in 2006. Although the H9000 was hinted at in 2016, it has been in development for around five years, and the long time spent on R&D was mostly due to this model being built on a newly developed platform comprising multiple 32-bit floating-point ARM processors (previous models had been based on more traditional 24-bit fixed-point DSP). Interestingly, in the H9000, the quad-core ARM processors are mounted on removable cards, the idea being to allow easy upgrading of the device as and when even more powerful processors become available.

The benefits of the new platform are abundantly clear, but a tricky side-effect of such a radical change is that the massive library of effects algorithms developed by Eventide over the last 30 or 40 years can't run directly on the new platform. They all needed to be converted, which is not a trivial task because it's not just about recompiling the source code — the different maths environments can produce different outputs for the same inputs, with slightly different-sounding results, which of course was deemed unacceptable! To ensure that the ported algorithms sound exactly the same as the old ones, under all possible conditions and settings, Eventide developed a special 'automated listener' program to analyse each and every algorithm with every possible parameter value (far beyond a practical task for human listeners). This 'automated listener' compared the output of each ported algorithm with that of the original, reporting any errors so that appropriate corrections could be implemented. The effort was worthwhile, because the results sound impeccably good!

The H9000 is a fan-cooled, 2U rackmounting multi-channel effects processor with comprehensive I/O and control options. Like the previous H8000FW, which was restricted to eight audio channels, the H9000 is equipped with eight channels of analogue, AES3 and ADAT I/O on the rear panel. But it also features a 16 I/O USB 2.0 interface to allow integration with a DAW, and even more impressively, the H9000 can accommodate up to three optional expansion cards. At the time of writing, MADI and Dante cards are available, but Ravenna and AES67 cards are also due for release very soon. Each card can handle 32 channels of I/O — potentially giving the H9000 access to up to 96 channels in total!

Naturally, this new flagship Harmonizer continues Eventide's extensive catalogue of familiar and popular sound effects and signal processing, while also introducing some new ones. The first production software version includes almost all (bar about 80) of the effects available in previous Harmonizers like the DSP4000, H3000 and H8000FW. Something that should appeal to musicians is that all of the H9 (stompbox) algorithms are included, too. 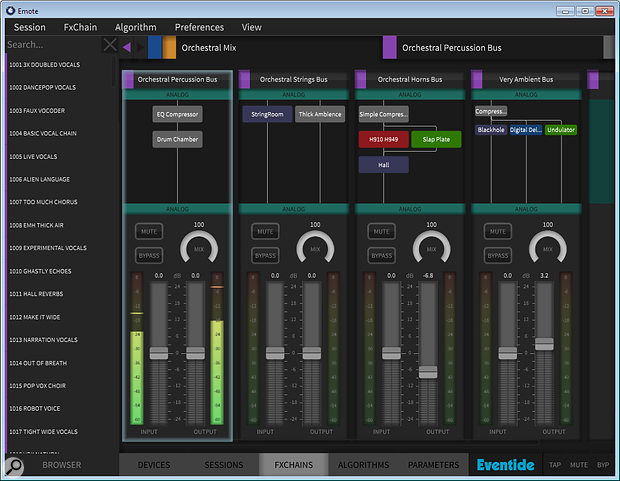 The Emote remote control app/plug-in for Mac and Windows features several tabs. Shown here is the FX‑Chains tab — FX‑Chains are a new feature on the H9000 model.Apparently, the four quad-core ARM processors make the H9000 roughly four times more powerful than the H8000. This processing resource is structured internally as 16 virtual DSP engines, so the H9000 can run up to 16 separate effects algorithms simultaneously, with a total of up to 32 channels of processed audio in and out at any one time. But rather than just having a massive pool of effects processors, there's a new feature called 'FX-Chains', with four chains being available at the same time, each with up to four effects algorithms, working on up to eight audio channels in and out. The effects algorithms in each FX-Chain can be connected in a variety of series/parallel configurations, to create pretty much any processing structure imaginable. There are some limitations, with one of the more surprising ones being that separate FX-Chains can't be linked to each other inside the H9000 — though there are plans to add this in an update. Similarly, there's no provision to mix the outputs of different FX-Chains to feed the same physical outputs.

But even with these restrictions there's an enormous amount of signal-processing power and flexibility, allowing a vast array of mind-bogglingly astonishing effects. And the current FX-Chain structure lends itself rather nicely to processing mono, stereo and multichannel stems from a DAW (as well as individual source tracks). For example, one FX-Chain could be a complete vocal processing strip, while another could apply some guitar processing, and the others some reverbs, or backing vocal chorusing, or anything you could want or need...

The H9000R is identical to the H9000 on the inside, but lacks the front-panel controls — bringing down the price — and is operated entirely via the Emote software.

The H9000 has a familiar-looking suite of front-panel controls and a large colour display, but there's a less expensive remote-controlled version, the H9000R, with a blank front panel; both come with identical software and the same audio and control connectivity. Remote control is via either the Emote stand‑alone Mac/Windows app, or a plug-in version of it (VST, AU and AAX formats). The H9000 can be connected to the computer via USB, LAN, or Wi-Fi (a dongle is included). Eventide currently have no plans for Emote to run on iOS or Android, though.

The standard unit's satin-grey brushed front panel really does look like an evolution of previous Harmonizers — it retains the familiar numerical keypad, array of cursor and menu buttons, the encoder wheel, and a display screen, and all more or less in the same locations. The new screen is larger than previous ones, and in colour of course, but I'd expected a touch-sensitive screen — which it is not. Instead, Eventide decided to stick with the soft-keys idea for accessing adjacent menu functions highlighted on the screen. There's nothing wrong with that, but I'm so used to touchscreens now that I found myself stabbing at the screen quite often, wondering why a function wouldn't activate!

The past few models of Harmonizer have shared a pretty standardised panel layout, and if you're familiar with them the H9000's revisions will take a little getting used to, but the overall impression is of an elegant, sophisticated and powerful machine, yet one that isn't intimidating despite its obvious complexity. There are now eight soft-keys, with four each side of the display screen, instead of just four below. Basic level metering is provided by eight three-LED traffic-light bar-graphs above the screen, and there's a smattering of direct-access buttons, all of which have integrated LED status indicators, while some also have extra functions, depending on whether they're pressed for long or short durations. The buttons cover the key functions like Power, Setup, Save, Bypass and Tap, and access the menu screens to recall Sessions, FX-Chains, Algorithms, Parameters and so on. The traditional memory card slot has also been replaced with a pair of type-A USB sockets.

Given the overview of connectivity mentioned earlier, it's no surprise that there are lots of sockets around the back. Eight channels of balanced line-level analogue I/O are provided via a brace of AES59 (Tascam wiring) D-sub connectors, and the first two channels are duplicated on standard three-pin XLRs. The analogue operating level in and out can be switched between +4dBu and -10dBV in channel pairs, but unlike some previous models the H9000 can't accept direct instrument signal levels. For digital installations, two XLRs provide AES3 in and out, while another AES59 D-sub accesses eight AES3 I/O channels. Coaxial S/PDIF is available on RCA phono sockets, and JIS-F05 lightpipe connectors can be configured for optical S/PDIF or eight channels of ADAT I/O. Whereas all the other digital I/O will work at standard and double sample rates, the ADAT option only operates at base sample rates — there's no S/MUX function, so the ports are disabled when working at higher sample rates. Also, the H9000's internal routing system can only access one of these digital input formats at a time, although the processed effects outputs can be duplicated across any or all of them simultaneously.

We're used to Harmonizers with a bewildering array of effects, but the H9000 adds to that an equally bewildering array of I/O options, including 16 channels of bi‑directional USB interfacing, and provision for a range of digital audio and network expansion cards.Although all the standard sample rates from 44.1 to 96 kHz are supported (ADAT excepted), not all algorithms can currently run at the double rates (48 of them, in fact). Apparently, the physical hardware is capable of operating with sample rates up to 192kHz, though, and an update is planned to enable working at quad sample rates in the future.

There's no sample-rate conversion on any of the digital inputs, so the H9000's internal processing must be synchronised to the selected digital input source, whether that's a specific digital input connection or one of the expansion cards. There's also an external word-clock input for installations running from a master clock, and an internal clock is available when using the analogue inputs, of course. 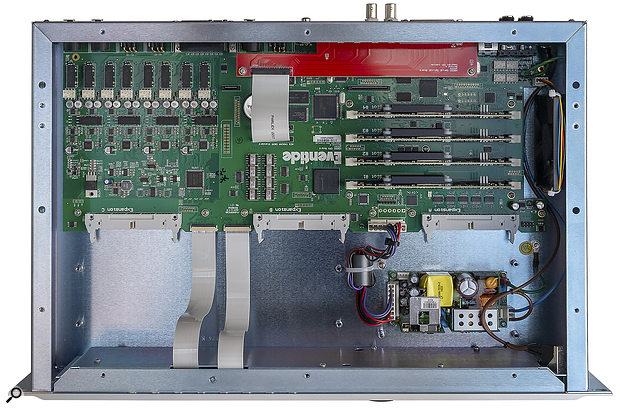 Inside the H9000: you can see that the four ARM processors are mounted vertically on daughter boards, which will allow the unit to be upgraded as more powerful processors become available.A type-B USB 2.0 socket caters for exchanging up to 16 channels of audio with a computer; the H9000 is class-compliant with Core Audio on Macs, while, in the usual way, a bespoke ASIO driver must be installed for Windows. BNCs are provided for word-clock in and out, and the familiar trio of DIN sockets is included for MIDI (supporting both control and MIDI Clock data). Additionally, there are two more type-A USB ports at the rear, an RJ45 Ethernet connector, and four quarter-inch sockets — two for foot pedals (one-, two- or three-button switches or expression pedals can be accommodated), and two (not‑yet functional) for relay-switched functions. A grounded universal IEC inlet accepts mains voltages between 100 and 240 Volts AC.

As you'd expect, the individual effects algorithms and FX-Chain settings ('Presets'), as well as the machine's complete setup configurations (referred to as 'Sessions' and containing routing, sample rate and other global settings, FX-Chains, individual effects parameters, etc.) can be saved and recalled to a thumb drive or hard drive plugged into any of the four USB type-A sockets. These USB ports can also host the aforementioned Wi-Fi dongle, or even a USB MIDI controller to adjust parameters on the fly.