The H9000 doesn't boot up very quickly — it was a full minute before I even saw a loading bar on the screen, and almost two and a half before I could load a Session and start processing audio. While that surprised me, it's not a huge issue in practice and once operational the H9000 really is delightfully straightforward to control using the cursors, the soft-keys and the jog wheel, with logical menu functions and remarkably intuitive operation for such a sophisticated machine. Everything seems to work just the way you'd expect, which is always reassuring and confidence-building... especially when there's no manual in the box! Full manuals for the hardware and Emote app are available from Eventide's website and these are worth reading to clarify some of the finer operational points, as well as for the listings of presets and algorithms. 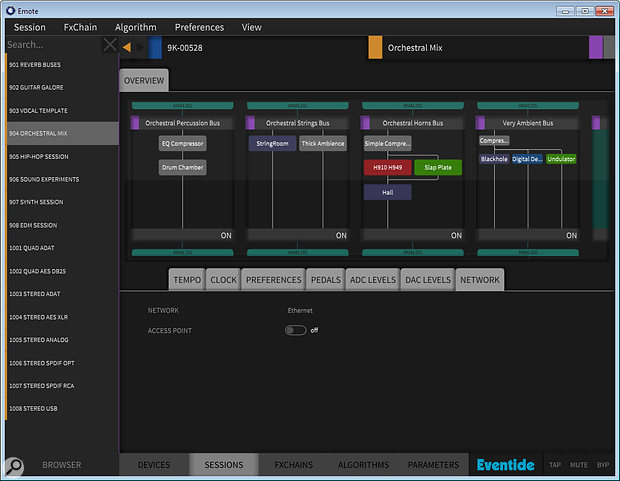 The Emote app's Sessions tab.Loading stored Sessions is a little ponderous, but I found the visual Preview mode particularly helpful. This reveals the stored FX-Chains, algorithms, and I/O setup of each Session, which saves a lot of time and frustration when trying to find a vaguely remembered Session. As with all Eventide's Harmonizers for many years, the sheer quantity of effects in the H9000 is mindboggling! So some way of tagging and searching for favourite Sessions, FX-Chains and algorithms would make life much easier. In the meantime, a reasonably practical workaround is to re-save favoured items with your initials as a prefix — that helped me speed up their location considerably. To indicate the scale of the 'problem', I counted 621 factory presets, each constructed from various combinations of (by my reckoning) 1435 effects algorithms. Thankfully, the presets have been grouped together under descriptive umbrella titles for different functions, applications and genres. You could probably spend a long and happy career just getting to know all of the different effects on offer in the H9000!

While many effects are impressively useful straight out of the box, I felt the need to tweak many to make them more appealing and appropriate. It's easy enough, but it all takes time, and I spent many, many hours working my way through most of the algorithms and presets, to modify or build bespoke FX-Chains for processing spoken and singing voices as well as for my synths and keyboards, and a friend's guitar. A lot of the effects are plain wacky and 'other-worldly' (great for radio drama, sci-fi films and probably games) but many more are genuinely creative and musically inspiring, making using it a very involving, rewarding and enjoyable experience. It really is hard to conceive of anything the H9000 can't do given a bit of experimentation and careful tweaking, and time spent fine-tuning the stock effects really does pay dividends. The FX-Chain structure, which resembles a kind of channel-strip approach, also makes a very logical and practical working paradigm, grouping and interconnecting algorithms together in clear and understandable ways.

During my time with the unit, I experienced one system crash, quite early on after selecting several different algorithms within one FX-Chain — but I discovered that a new software version was available. Updating it was another efficient and painless process with the unit wired into my LAN, and I had no further problems. 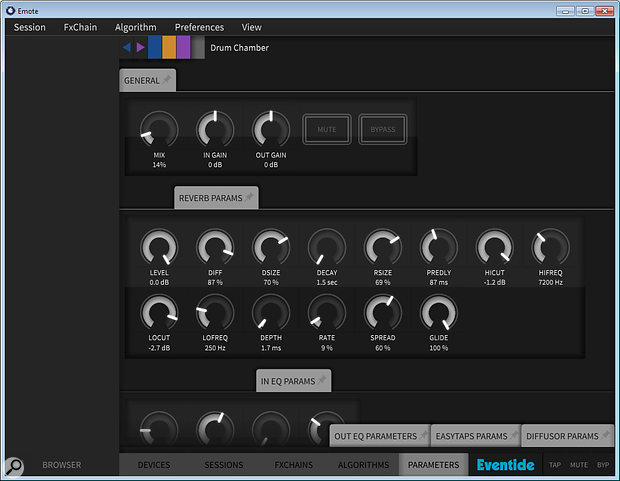 The Emote app's Parameters tab.Operating the H9000 via its front panel is straightforward, but the low whirring of the cooling fan makes it desirable to mount the hardware away from the listening position — and thus out of reach. Thankfully, the Emote remote-control software makes that a very pragmatic option. I dread connecting hardware to my studio LAN because (for a complicated set of reasons I won't bore you with) my local network doesn't use the bog-standard 192.168.x.x IP address structure and, as a result, quite a lot of networkable hardware has proven frustratingly difficult to integrate. Not so with the H9000: within moments of plugging an Ethernet cable between it and a spare router port it had negotiated an appropriate IP address, and a quick flick of the Auto-Connect button on the Emote software (which I'd already installed on my Windows 7 64 computer) had the hardware talking to the app without any fuss — delightfully quick and pain-free!

The Emote interface is as straightforward to navigate as the front panel, with a series of tabs along the bottom to view the hardware device's properties, as well as the Session (with access to all the configuration menus), FX-Chains, Algorithms (including the I/O routing), and effects parameters. There are also dedicated buttons for Tap (tempo), Mute and Bypass, and the screen layouts largely mimic the hardware's display, so navigation and operation feels familiar. In fact, I'd say that controlling the H9000 from the computer quickly became quicker and easier than from the front panel.

While there are one or two areas that might benefit from further evolution, the H9000 is a very impressive flagship product indeed. There's an astonishing array of great-sounding effects, lots of connectivity, and the new 32-bit processing platform is massively powerful and upgradeable — it should take the company well into the future. Obviously, it doesn't come cheap; as well as the hardware and all the time spent on R&D, there's half a century's worth of algorithms in this box, and the market for such a sophisticated effects processor is relatively small. But the 'R' version without the front-panel controls brings the price down a little, and of course Eventide offer a range of other products which draw on these algorithms and are designed suit various different applications and budgets.

As usual, I ran an array of performance tests on the H9000 using an Audio Precision test set. Eventide's published specs are a little sparse, but I was able to confirm most of them without difficulty. The company claim the converters in the H9000 to be world class and even better than those of the H8000FW, so I ran my usual AES17 dynamic range tests on the A-D/D-A converters.

For the A-D, I achieved a figure of 119.25dB (A-weighted) which is pretty impressive and ranks it fractionally above the Prism Lyra and Titan, matches the Apogee Symphony and falls slightly short of the Grace Design M108. The THD measurement is outstanding at 0.0009 percent. The analogue/digital calibration, when set to +4dBu, delivered a maximum digital signal (0dBFS) at +21.8dBu.

The D-A converter, while capable, couldn't match its sibling's performance, achieving an AES17 dynamic range measurement of 116dB (A-weighted) with a THD figure of 0.0015 percent — the AES17 figure ranks it as the equal of the Prism Lyra and Titan, and Antelope's Orion.

The H9000 makes an impressive flagship model for Eventide's Harmonizer family, and the newly designed processing platform is clearly massively powerful and should take the company well into the future.